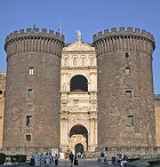 Encyclopedia
Castel Nuovo often called Maschio Angioino
Capetian House of Anjou
The Capetian House of Anjou, also known as the House of Anjou-Sicily and House of Anjou-Naples, was a royal house and cadet branch of the direct House of Capet. Founded by Charles I of Sicily, a son of Louis VIII of France, the Capetian king first ruled the Kingdom of Sicily during the 13th century...
, is a medieval
Middle Ages
The Middle Ages is a periodization of European history from the 5th century to the 15th century. The Middle Ages follows the fall of the Western Roman Empire in 476 and precedes the Early Modern Era. It is the middle period of a three-period division of Western history: Classic, Medieval and Modern...
castle in the city of Naples
Naples
Naples is a city in Southern Italy, situated on the country's west coast by the Gulf of Naples. Lying between two notable volcanic regions, Mount Vesuvius and the Phlegraean Fields, it is the capital of the region of Campania and of the province of Naples...
, southern Italy
Italy
Italy , officially the Italian Republic languages]] under the European Charter for Regional or Minority Languages. In each of these, Italy's official name is as follows:;;;;;;;;), is a unitary parliamentary republic in South-Central Europe. To the north it borders France, Switzerland, Austria and...
. It is the main symbol of the architecture of the city. Castel Nuovo has been expanded or renovated several times since it was first begun in 1279.

Before the accession of Charles I of Anjou to the throne in 1266, the capital of the Kingdom of Naples
Kingdom of Naples
The Kingdom of Naples, comprising the southern part of the Italian peninsula, was the remainder of the old Kingdom of Sicily after secession of the island of Sicily as a result of the Sicilian Vespers rebellion of 1282. Known to contemporaries as the Kingdom of Sicily, it is dubbed Kingdom of...
was Palermo
Palermo
Palermo is a city in Southern Italy, the capital of both the autonomous region of Sicily and the Province of Palermo. The city is noted for its history, culture, architecture and gastronomy, playing an important role throughout much of its existence; it is over 2,700 years old...
. There was a royal residence in Naples, at the Castel Capuano
Castel Capuano
Castel Capuano is a castle in Naples, southern Italy. It takes its name from the fact that it was at that point in the city walls where the road led out to the city of Capua...
. However, when the capital was moved to Naples, Charles ordered a new castle, not far from the sea, built to house the court.
Works, directed by French architects, began in 1279 and were completed three years later.

Due to the War of the Sicilian Vespers
War of the Sicilian Vespers
The War of the ' Vespers started with the insurrection of the Sicilian Vespers against Charles of Anjou in 1282 and finally ended with the peace of Caltabellotta in 1302...
, the new fortress remained uninhabited until 1285, when Charles died and was succeeded by his son, Charles II. Castel Nuovo soon became the nucleus of the historical center of the city, and was often the site of famous events. For example, on December 13, 1294, Pope Celestine V
Pope Celestine V
Pope Saint Celestine V, born Pietro Angelerio , also known as Pietro da Morrone was elected pope in the year 1294, by the papal election of 1292–1294, the last non-conclave in the history of the Roman Catholic Church...
resigned as pope in a hall of the castle. Eleven days later, Boniface VIII was elected pope here by the cardinal collegium and immediately moved to Rome to avoid the Angevin authority.

Under king Robert
Robert of Naples
Robert of Anjou , known as Robert the Wise was King of Naples, titular King of Jerusalem and Count of Provence and Forcalquier from 1309 to 1343, the central figure of Italian politics of his time. He was the third but eldest surviving son of King Charles II of Naples the Lame and Maria of Hungary...
(reigned from 1309), the castle was enlarged and embellished, becoming a centre of patronage of art. In 1347 Castel Nuovo was sacked by the army of Louis I of Hungary, and had to be heavily restored after the return of queen Joanna I. The new works permitted the queen to resist the Hungarian siege during Louis' second expedition. The castle was besieged numerous times in the following years, and was the official residence of King Ladislaus from 1399. It decayed under his sister Joanna II.

Under the Aragon
Aragon
Aragon is a modern autonomous community in Spain, coextensive with the medieval Kingdom of Aragon. Located in northeastern Spain, the Aragonese autonomous community comprises three provinces : Huesca, Zaragoza, and Teruel. Its capital is Zaragoza...
ese dynasty, begun by Alfonso V
Alfonso V of Aragon
Alfonso the Magnanimous KG was the King of Aragon , Valencia , Majorca, Sardinia and Corsica , and Sicily and Count of Barcelona from 1416 and King of Naples from 1442 until his death...
in 1442, the fortress was updated to resist the new artillery. A famous triumphal arch, designed by Francesco Laurana
Francesco Laurana
Francesco Laurana, also known as Francesco de la Vrana was a Dalmatian-born sculptor and medallist. He is considered as both Croatian and Italian sculptor.-Life and works:...
, was added to the main gate to celebrate Alfonso's entrance in Naples. The decoration was executed by the sculptors Pere Johan
Pere Johan
Pere Johan or Pere Joan was a Catalan Gothic sculptor.He was the son of sculptor Jordi de Déu, a former slave and disciple of sculptor Jaume Cascalls...
and Guillem Sagrera
Guillem Sagrera
Guillem Sagrera was a Gothic sculptor and architect from Mallorca.A native of Felanitx, in Majorca, he worked mostly in Spain and Catalonia. In the early 15th century he was directors of the works of the Cathedral of Perpignan in late-Gothic style; in the same style is La Seu Cathedral of Palma...
, called by Alfonso from Catalonia.

In a hall of the castle the famous Barons conspiracy against King Ferdinand I
Ferdinand I of Naples
Ferdinand I , also called Don Ferrante, was the King of Naples from 1458 to 1494. He was the natural son of Alfonso V of Aragon by Giraldona Carlino.-Biography:...
, Alfonso's son, occurred. The King had invited the barons for a feast; but, a certain point, he had the garrison close all the hall's doors and all the barons were arrested and later executed. The Barons' Hall was the seat of the Council of the commune of Naples until 2006.

After the fierce sack of Naples by Charles VIII of France
Charles VIII of France
Charles VIII, called the Affable, , was King of France from 1483 to his death in 1498. Charles was a member of the House of Valois...
's soldiers in 1494, the Kingdom was annexed by Spain, and the castle was reduced from residence to an important military fortress. It was the temporary residence of the Spanish kings during their visits in the city, such as that of Charles V
Charles V, Holy Roman Emperor
Charles V was ruler of the Holy Roman Empire from 1519 and, as Charles I, of the Spanish Empire from 1516 until his voluntary retirement and abdication in favor of his younger brother Ferdinand I and his son Philip II in 1556.As...
in 1535. The castle was again used as a residence by Charles III
Charles III of Spain
Charles III was the King of Spain and the Spanish Indies from 1759 to 1788. He was the eldest son of Philip V of Spain and his second wife, the Princess Elisabeth Farnese...
and later on by Duke Stefano Di Conza.