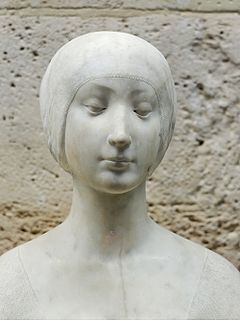 Francesco Laurana, also known as Francesco de la Vrana (c. 1430 – before 12 March 1502) was a Dalmatia
Dalmatia
Dalmatia is a historical region on the eastern coast of the Adriatic Sea. It stretches from the island of Rab in the northwest to the Bay of Kotor in the southeast. The hinterland, the Dalmatian Zagora, ranges from fifty kilometers in width in the north to just a few kilometers in the south....
n-born sculptor
Sculpture
Sculpture is three-dimensional artwork created by shaping or combining hard materials—typically stone such as marble—or metal, glass, or wood. Softer materials can also be used, such as clay, textiles, plastics, polymers and softer metals...
and medal
Medal
A medal, or medallion, is generally a circular object that has been sculpted, molded, cast, struck, stamped, or some way rendered with an insignia, portrait, or other artistic rendering. A medal may be awarded to a person or organization as a form of recognition for athletic, military, scientific,...
list. He is considered as both Croatian
Croats
Croats are a South Slavic ethnic group mostly living in Croatia, Bosnia and Herzegovina and nearby countries. There are around 4 million Croats living inside Croatia and up to 4.5 million throughout the rest of the world. Responding to political, social and economic pressure, many Croats have...
and Italian sculptor.

Laurana was born in Vrana, near Zadar
Zadar
Zadar is a city in Croatia on the Adriatic Sea. It is the centre of Zadar county and the wider northern Dalmatian region. Population of the city is 75,082 citizens...
, in Dalmatia
Dalmatia
Dalmatia is a historical region on the eastern coast of the Adriatic Sea. It stretches from the island of Rab in the northwest to the Bay of Kotor in the southeast. The hinterland, the Dalmatian Zagora, ranges from fifty kilometers in width in the north to just a few kilometers in the south....
. Under the rule of Venice Vrana was named La Vrana, forme romance
Romance languages
The Romance languages are a branch of the Indo-European language family, more precisely of the Italic languages subfamily, comprising all the languages that descend from Vulgar Latin, the language of ancient Rome...
de Vrana, which is the name used by Francesco Laurana.

After an apprenticeship under a sculptor, he began his solo career at Naples
Naples
Naples is a city in Southern Italy, situated on the country's west coast by the Gulf of Naples. Lying between two notable volcanic regions, Mount Vesuvius and the Phlegraean Fields, it is the capital of the region of Campania and of the province of Naples...
, where he was one of the team of sculptors finishing the triumphal arch of Castel Nuovo
Castel Nuovo
Castel Nuovo , often called Maschio Angioino, is a medieval castle in the city of Naples, southern Italy. It is the main symbol of the architecture of the city...
for Alfonso V of Aragon
Alfonso V of Aragon
Alfonso the Magnanimous KG was the King of Aragon , Valencia , Majorca, Sardinia and Corsica , and Sicily and Count of Barcelona from 1416 and King of Naples from 1442 until his death...
. After the death of Alfonso (1458) he was called to the court at Aix-en-Provence
Aix-en-Provence
Aix , or Aix-en-Provence to distinguish it from other cities built over hot springs, is a city-commune in southern France, some north of Marseille. It is in the region of Provence-Alpes-Côte d'Azur, in the département of Bouches-du-Rhône, of which it is a subprefecture. The population of Aix is...
, of René d'Anjou, the former and still titular King of Naples, who commissioned from him a series of bronze portrait medal
Medal
A medal, or medallion, is generally a circular object that has been sculpted, molded, cast, struck, stamped, or some way rendered with an insignia, portrait, or other artistic rendering. A medal may be awarded to a person or organization as a form of recognition for athletic, military, scientific,...
s of personnages at the court.

From 1466 to 1471 Laurana was in Sicily
Sicily
Sicily is a region of Italy, and is the largest island in the Mediterranean Sea. Along with the surrounding minor islands, it constitutes an autonomous region of Italy, the Regione Autonoma Siciliana Sicily has a rich and unique culture, especially with regard to the arts, music, literature,...
. Works of this period include the Mastrantonio Chapel and the tomb of Pietro Speciale in the church of S. Francesco in Palermo, the side door of the church of St. Marguerite in Sciacca
Sciacca
Sciacca , also Schiacca, is a town and comune in the province of Agrigento on the southwestern coast of Sicily...
, Madonna and Child sculptures in the Cathedrals of Palermo
Cathedral of Palermo
The Cathedral of Palermo is an architectural complex in Palermo, Sicily, southern Italy. It is characterized by the presence of different styles, due to a long history of additions, alterations and restorations, the last of which occurred in the 18th century....
(1471) and Noto
Noto
Noto is a city and comune in the Province of Syracuse, Sicily . Its located 32 km southwest of the city of Syracuse at the foot of the Iblean Mountains and gives its name to the surrounding valley, Val di Noto...
, and a bust allegedly portraying Eleanor of Aragon
Eleanor of Aragon
Eleanor of Aragon was a daughter of King Peter IV of Aragon and his wife Eleanor of Sicily. She was a member of the House of Aragon and Queen consort of Castile by her marriage.-Family:...
, now in the Palazzo Abatellis
Palazzo Abatellis
Palazzo Abatellis is a palace in Palermo, Sicily, southern Italy, located in the Kalsa quarter. It is home to the Galleria Regionale della Sicilia .-History:...
in Palermo, Sicily.

In 1471 he returned to Naples where he executed the sculpture of the Virgin in the Sta. Barbara Chapel. In 1474-1477 Laura spent three years in Urbino
Urbino
Urbino is a walled city in the Marche region of Italy, south-west of Pesaro, a World Heritage Site notable for a remarkable historical legacy of independent Renaissance culture, especially under the patronage of Federico da Montefeltro, duke of Urbino from 1444 to 1482...
, where his relative Luciano Laurana
Luciano Laurana
Luciano Laurana was a Croatian or Italian architect and engineer from the historic Vrana settlement near the town of Zadar in Dalmatia, Croatia. After education by his father Martin in Vrana settlement, he worked mostly in Italy during the late 15th century...
worked. Then he transferred again to Marseille, where he built a small chapel in the Cathedral of S. Marie Majeure (1475–81) that is the first structure in France entirely in the Renaissance style, and his workshop executed the St. Lazarus marble altar there. From his workshop also came the retable
Retable
A retable is a framed altarpiece, raised slightly above the back of the altar or communion table, on which are placed the cross, ceremonial candlesticks and other ornaments....
of the Calvary in St. Didier d'Avignon
Avignon
Avignon is a French commune in southeastern France in the départment of the Vaucluse bordered by the left bank of the Rhône river. Of the 94,787 inhabitants of the city on 1 January 2010, 12 000 live in the ancient town centre surrounded by its medieval ramparts.Often referred to as the...
and the tombs of Giovanni Cossa at Sainte-Marthe de Tarascon and of Charles, comte du Maine, in Le Mans
Le Mans
Le Mans is a city in France, located on the Sarthe River. Traditionally the capital of the province of Maine, it is now the capital of the Sarthe department and the seat of the Roman Catholic diocese of Le Mans. Le Mans is a part of the Pays de la Loire region.Its inhabitants are called Manceaux...
.

He was one of the most significant and most complex sculptors of the 15th century—complex because of his activities within varying cultural circles and his exposure to differing influences. His best works evolved in the workshop tradition in collaboration with other artists. His portrait bust
Bust (sculpture)
A bust is a sculpted or cast representation of the upper part of the human figure, depicting a person's head and neck, as well as a variable portion of the chest and shoulders. The piece is normally supported by a plinth. These forms recreate the likeness of an individual...
s reveal a creative individuality that was seen as particularly fascinating in the late 19th century. Though it is impossible to chart his stylistic development, his later work made in France shows some assimilation of northern realism
Realism (visual arts)
Realism in the visual arts is a style that depicts the actuality of what the eyes can see. The term is used in different senses in art history; it may mean the same as illusionism, the representation of subjects with visual mimesis or verisimilitude, or may mean an emphasis on the actuality of...
, which is absent from the work executed in Italy.