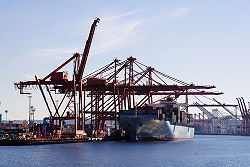 Cargo is goods or produce
Produce
Produce is a generalized term for a group of farm-produced goods and, not limited to fruits and vegetables . More specifically, the term "produce" often implies that the products are fresh and generally in the same state as where they were harvested. In supermarkets the term is also used to refer...
transported, generally for commercial
Commerce
While business refers to the value-creating activities of an organization for profit, commerce means the whole system of an economy that constitutes an environment for business. The system includes legal, economic, political, social, cultural, and technological systems that are in operation in any...
gain, by ship
Cargo ship
A cargo ship or freighter is any sort of ship or vessel that carries cargo, goods, and materials from one port to another. Thousands of cargo carriers ply the world's seas and oceans each year; they handle the bulk of international trade...
, aircraft
Cargo airline
Cargo airlines are airlines dedicated to the transport of cargo. Some cargo airlines are divisions or subsidiaries of larger passenger airlines.-Logistics:...
, train, van
Van
A van is a kind of vehicle used for transporting goods or groups of people.In British English usage, it can be either specially designed or based on a saloon or sedan car, the latter type often including derivatives with open backs...
or truck
Truck
A truck or lorry is a motor vehicle designed to transport cargo. Trucks vary greatly in size, power, and configuration, with the smallest being mechanically similar to an automobile...
. In modern times, containers
Intermodal container
An intermodal container is a standardized reusable steel box used for the safe, efficient and secure storage and movement of materials and products within a global containerized intermodal freight transport system...
are used in most intermodal
Intermodal freight transport
Intermodal freight transport involves the transportation of freight in an intermodal container or vehicle, using multiple modes of transportation , without any handling of the freight itself when changing modes. The method reduces cargo handling, and so improves security, reduces damages and...
long-haul cargo transport
Transport
Transport or transportation is the movement of people, cattle, animals and goods from one location to another. Modes of transport include air, rail, road, water, cable, pipeline, and space. The field can be divided into infrastructure, vehicles, and operations...
.

There is a wide range of maritime
Sea
A sea generally refers to a large body of salt water, but the term is used in other contexts as well. Most commonly, it means a large expanse of saline water connected with an ocean, and is commonly used as a synonym for ocean...
cargo handled at seaport
Port
A port is a location on a coast or shore containing one or more harbors where ships can dock and transfer people or cargo to or from land....
terminals.

Air cargo, commonly known as air freight, is collected by firms from shippers and delivered to customers. Aircraft were first used for carrying mail as cargo
Airmail
Airmail is mail that is transported by aircraft. It typically arrives more quickly than surface mail, and usually costs more to send...
in 1911. Eventually manufacturers started designing aircraft for other types of freight as well.

There are many commercial aircraft suitable for carrying cargo such as the Boeing 747
Boeing 747
The Boeing 747 is a wide-body commercial airliner and cargo transport, often referred to by its original nickname, Jumbo Jet, or Queen of the Skies. It is among the world's most recognizable aircraft, and was the first wide-body ever produced...
and the bigger An-124, which was purposely built for easy conversion into a cargo aircraft
Cargo aircraft
A cargo aircraft is a fixed-wing aircraft designed or converted for the carriage of goods, rather than passengers. They are usually devoid of passenger amenities, and generally feature one or more large doors for the loading and unloading of cargo...
. Such large aircraft employ quick-loading containers known as Unit Load Devices (ULDs)
Unit Load Device
A unit load device , is a pallet or container used to load luggage, freight, and mail on wide-body aircraft and specific narrow-body aircraft. It allows a large quantity of cargo to be bundled into a single unit. Since this leads to fewer units to load, it saves ground crews time and effort and...
, much like containerized cargo ships. The ULDs are located in front section of the aircraft.

Most nations own and utilize large numbers of cargo aircraft such as the C-17 Globemaster III
C-17 Globemaster III
The Boeing C-17 Globemaster III is a large military transport aircraft. Developed for the United States Air Force from the 1980s to the early 1990s by McDonnell Douglas, the C-17 is used for rapid strategic airlift of troops and cargo to main operating bases or forward operating bases throughout...
for airlift
Airlift
Airlift is the act of transporting people or cargo from point to point using aircraft.Airlift may also refer to:*Airlift , a suction device for moving sand and silt underwater-See also:...
logistic needs.

Trains are capable of transporting large numbers of containers that come from shipping ports. Trains are also used for the transportation of steel, wood and coal. They are used because they can carry a large amount and generally have a direct route to the destination. Under the right circumstances, freight transport by rail is more economic and energy efficient than by road, especially when carried in bulk or over long distances.

The main disadvantage of rail freight is its lack of flexibility. For this reason, rail has lost much of the freight business to road transport. Rail freight is often subject to transshipment
Transshipment
Transshipment or Transhipment is the shipment of goods or containers to an intermediate destination, and then from there to yet another destination....
costs, since it must be transferred from one mode of transportation to another. Practices such as containerization aim at minimizing these costs.

Many governments are currently trying to encourage shippers to use trains more often because of the environmental benefits.

Freight is usually organized into various shipment categories before it is transported. An item's category is determined by:

The shipments are usually palletized, stretch [shrink]-wrapped and packaged for a mixed-freight environment. Unlike express or parcel, LTL shippers must provide their own packaging, as carriers do not provide any packaging supplies or assistance. However, circumstances may require crating or other substantial packaging.

Air freight shipments are very similar to LTL shipments in terms of size and packaging requirements. However, air freight or air cargo shipments typically need to move at much faster speeds than 800 km or 497 mi per day. Air shipments may be booked directly with the carriers, through brokers or with online marketplace services. While shipments move faster than standard LTL, air shipments don’t always actually move by air.

In the United States, shipments larger than about 7000 kg (15,432 lb) are typically classified as truckload (TL) freight. This is because it is more efficient and economical for a large shipment to have exclusive use of one larger trailer rather than share space on a smaller LTL trailer.

Often, an LTL shipper may realize savings by utilizing a freight broker, online marketplace or other intermediary, instead of contracting directly with a trucking company. Brokers can shop the marketplace and obtain lower rates than most smaller shippers can obtain directly. In the LTL marketplace, intermediaries typically receive 50% to 80% discounts from published rates, where a small shipper may only be offered a 5% to 30% discount by the carrier. Intermediaries are licensed by the DOT and have requirements to provide proof of insurance.

Truckload (TL) carriers usually charge a rate per kilometre or mile. The rate varies depending on the distance, geographic location of the delivery, items being shipped, equipment type required, and service times required. TL shipments usually receive a variety of surcharges very similar to those described for LTL shipments above. In the TL market, there are thousands more small carriers than in the LTL market. Therefore, the use of transportation intermediaries or brokers is extremely common.

Another cost-saving method is facilitating pickups or deliveries at the carrier’s terminals. By doing this, shippers avoid any accessorial fees that might normally be charged for liftgate, residential pickup/delivery, inside pickup/delivery, or notifications/appointments. Carriers or intermediaries can provide shippers with the address and phone number for the closest shipping terminal to the origin and/or destination.

Shipping experts optimize their service and costs by sampling rates from several carriers, brokers and online marketplaces. When obtaining rates from different providers, shippers may find quite a wide range in the pricing offered. If a shipper uses a broker, freight forwarder or other transportation intermediary, it is common for the shipper to receive a copy of the carrier's Federal Operating Authority. Freight brokers and intermediaries are also required by Federal Law to be licensed by the Federal Highway Administration. Experienced shippers avoid unlicensed brokers and forwarders because if brokers are working outside the law by not having a Federal Operating License, the shipper has no protection in the event of a problem. Also, shippers normally ask for a copy of the broker's insurance certificate and any specific insurance that applies to the shipment.

Governments are very concerned with the shipment of cargo, as it may bring security risks to a country. Therefore, many governments have enacted rules and regulations, administered by a customs
Customs
Customs is an authority or agency in a country responsible for collecting and safeguarding customs duties and for controlling the flow of goods including animals, transports, personal effects and hazardous items in and out of a country...
agency, to the handling of cargo to minimize risks of terrorism
Terrorism
Terrorism is the systematic use of terror, especially as a means of coercion. In the international community, however, terrorism has no universally agreed, legally binding, criminal law definition...
and other crime. Of particular concern is cargo entering through a country's borders.


There are many different ways and materials available to stabilize and secure cargo in the various modes of transportation. Conventional load securing
Load securing
thumb|Cargo damage because of improperly secured cargoLoad securing, also known as cargo securing, is the securing of cargo for transportation. According to the European Commission Transportation Department “it has been estimated that up to 25% of accidents involving trucks can be attributable to...
methods and materials such as steel strapping
Strapping
Strapping, also known as bundling and banding, is the process of applying a strap to an item to combine, hold, reinforce, or fasten it. The strap may also be referred to as strapping...
and wood blocking & bracing have been used for decades and are still widely used. Present load securing methods offer several other options including polyester strapping and lashing, synthetic webbings and dunnage bags, also known as air bags or inflatable bags.