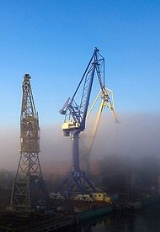 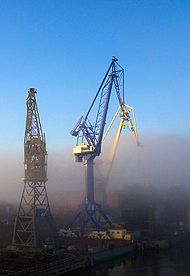 A dock is a human-made structure
Structure
Structure is a fundamental, tangible or intangible notion referring to the recognition, observation, nature, and permanence of patterns and relationships of entities. This notion may itself be an object, such as a built structure, or an attribute, such as the structure of society...
or group of structures involved in the handling of boats or ships, usually on or close to a shore
Shore
A shore or shoreline is the fringe of land at the edge of a large body of water, such as an ocean, sea, or lake. In Physical Oceanography a shore is the wider fringe that is geologically modified by the action of the body of water past and present, while the beach is at the edge of the shore,...
.

However, the exact meaning varies among different variants of the English language
English language
English is a West Germanic language that arose in the Anglo-Saxon kingdoms of England and spread into what was to become south-east Scotland under the influence of the Anglian medieval kingdom of Northumbria...
. "Dock" may also refer to a dockyard or shipyard
Shipyard
Shipyards and dockyards are places which repair and build ships. These can be yachts, military vessels, cruise liners or other cargo or passenger ships. Dockyards are sometimes more associated with maintenance and basing activities than shipyards, which are sometimes associated more with initial...
where the loading, unloading, building, or repairing of ships occurs.

The world's oldest known dock at Lothal
Lothal
Lothal is one of the most prominent cities of the ancient Indus valley civilization. Located in Bhāl region of the modern state of Gujarāt and dating from 2400 BCE. Discovered in 1954, Lothal was excavated from February 13, 1955 to May 19, 1960 by the Archaeological Survey of India...
(2400 BCE) was located away from the main current to avoid deposition of silt. Modern oceanographers have observed that the Harappans must have possessed great knowledge relating to tides in order to build such a dock on the ever-shifting course of the Sabarmati, as well as exemplary hydrography
Hydrography
Hydrography is the measurement of the depths, the tides and currents of a body of water and establishment of the sea, river or lake bed topography and morphology. Normally and historically for the purpose of charting a body of water for the safe navigation of shipping...
and maritime engineering. This was the earliest known dock found in the world, equipped to berth and service ships. It is speculated that Lothal engineers studied tidal movements, and their effects on brick-built structures, since the walls are of kiln-burnt bricks. This knowledge also enabled them to select Lothal's location in the first place, as the Gulf of Khambhat
Gulf of Khambhat
The Gulf of Khambhat is an inlet of the Arabian Sea along the west coast of India, in the state of Gujarat. It is about 80 miles in length, and divides the Kathiawar peninsula to the west from the eastern part of Gujarat state on the east. The Narmada and Tapti rivers empty into the Gulf...
has the highest tidal amplitude and ships can be sluiced through flow tides in the river estuary. The engineers built a trapezoidal structure, with north-south arms of average 21.8 metres (71.5 ft), and east-west arms of 37 metres (121 ft). 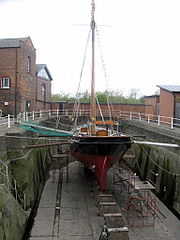 In British English
British English
British English, or English , is the broad term used to distinguish the forms of the English language used in the United Kingdom from forms used elsewhere...
, a dock is an enclosed area of water used for loading, unloading, building or repairing ship
Ship
Since the end of the age of sail a ship has been any large buoyant marine vessel. Ships are generally distinguished from boats based on size and cargo or passenger capacity. Ships are used on lakes, seas, and rivers for a variety of activities, such as the transport of people or goods, fishing,...
s. Such a dock may be created by building enclosing harbour walls into an existing natural water space, or by excavation within what would otherwise be dry land.

There are two specific elaborations of the dock:

A dockyard
Shipyard
Shipyards and dockyards are places which repair and build ships. These can be yachts, military vessels, cruise liners or other cargo or passenger ships. Dockyards are sometimes more associated with maintenance and basing activities than shipyards, which are sometimes associated more with initial...
(or "shipyard") consists of one or more docks, usually with other structures.

In American English
American English
American English is a set of dialects of the English language used mostly in the United States. Approximately two-thirds of the world's native speakers of English live in the United States....
, a dock is technically synonymous with pier
Pier
A pier is a raised structure, including bridge and building supports and walkways, over water, typically supported by widely spread piles or pillars...
or wharf
Wharf
A wharf or quay is a structure on the shore of a harbor where ships may dock to load and unload cargo or passengers.Such a structure includes one or more berths , and may also include piers, warehouses, or other facilities necessary for handling the ships.A wharf commonly comprises a fixed...
—any human-made structure in the water intended for people to be on. However, in modern use, pier is generally used to refer to structures originally intended for industrial use, such as seafood
Seafood
Seafood is any form of marine life regarded as food by humans. Seafoods include fish, molluscs , crustaceans , echinoderms . Edible sea plants, such as some seaweeds and microalgae, are also seafood, and are widely eaten around the world, especially in Asia...
processing or shipping
Shipping
Shipping has multiple meanings. It can be a physical process of transporting commodities and merchandise goods and cargo, by land, air, and sea. It also can describe the movement of objects by ship.Land or "ground" shipping can be by train or by truck...
, and more recently for cruise ship
Cruise ship
A cruise ship or cruise liner is a passenger ship used for pleasure voyages, where the voyage itself and the ship's amenities are part of the experience, as well as the different destinations along the way...
s, and dock is used for most everything else, often with a qualifier, such as ferry dock, swimming dock, ore dock
Ore dock
An ore dock is a large structure used for loading ore onto ships which then carry the ore to steelworks or to transshipment points. Most known ore docks were constructed near iron mines on the upper Great Lakes and served the lower Great Lakes. Ore docks still in existence are typically about ...
and others. However, pier is also commonly used to refer to wooden or metal structures that extend into the ocean from beaches and are used, for the most part, to accommodate fishing in the ocean without using a boat.

In the cottage country
Cottage country
Cottage country is a common name in Eastern Canada for areas that are popular locations for recreational properties such as cottages and summer homes. The name is often applied locally; that is, any major population centre may have its own popular "cottage country" area...
of Canada
Canada
Canada is a North American country consisting of ten provinces and three territories. Located in the northern part of the continent, it extends from the Atlantic Ocean in the east to the Pacific Ocean in the west, and northward into the Arctic Ocean...
and the United States
United States
The United States of America is a federal constitutional republic comprising fifty states and a federal district...
, a dock is a wooden platform built over water, with one end secured to the shore. The platform is used for the boarding and offloading of small boats.