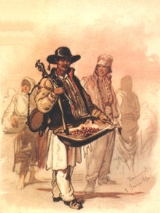 Some commentators trace the origins of commerce to the very start of communication
Communication
Communication is the activity of conveying meaningful information. Communication requires a sender, a message, and an intended recipient, although the receiver need not be present or aware of the sender's intent to communicate at the time of communication; thus communication can occur across vast...
in prehistoric times. Apart from traditional self-sufficiency
Self-sufficiency
Self-sufficiency refers to the state of not requiring any outside aid, support, or interaction, for survival; it is therefore a type of personal or collective autonomy...
, trading
Trade
Trade is the transfer of ownership of goods and services from one person or entity to another. Trade is sometimes loosely called commerce or financial transaction or barter. A network that allows trade is called a market. The original form of trade was barter, the direct exchange of goods and...
became a principal facility of prehistoric people, who barter
Barter
Barter is a method of exchange by which goods or services are directly exchanged for other goods or services without using a medium of exchange, such as money. It is usually bilateral, but may be multilateral, and usually exists parallel to monetary systems in most developed countries, though to a...
ed what they had for goods and services from each other. Historian Peter Watson
Peter Watson (business writer)
Peter Watson is an intellectual historian and former journalist, now perhaps best known for his work in the history of ideas.He was educated at the universities of Durham, London, and Rome. Watson was deputy editor of New Society, and was for four years a member of the Insight team of The Sunday...
dates the history of long-distance commerce
History of international trade
The history of international trade chronicles notable events that have affected the trade between various countries.In the era before the rise of the nation state, the term 'international' trade cannot be literally applied, but simply means trade over long distances; the sort of movement in goods...
from circa
Circa
Circa , usually abbreviated c. or ca. , means "approximately" in the English language, usually referring to a date...
150,000 years ago.
In historic times, the introduction of currency
Currency
In economics, currency refers to a generally accepted medium of exchange. These are usually the coins and banknotes of a particular government, which comprise the physical aspects of a nation's money supply...
as a standardized money
Money
Money is any object or record that is generally accepted as payment for goods and services and repayment of debts in a given country or socio-economic context. The main functions of money are distinguished as: a medium of exchange; a unit of account; a store of value; and, occasionally in the past,...
facilitated a wider exchange of goods and services. Numismatists have collections of these monetary tokens, which include coin
Coin
A coin is a piece of hard material that is standardized in weight, is produced in large quantities in order to facilitate trade, and primarily can be used as a legal tender token for commerce in the designated country, region, or territory....
s from some Ancient World large-scale societies, although initial usage involved unmarked lumps of precious metal
Precious metal
A precious metal is a rare, naturally occurring metallic chemical element of high economic value.Chemically, the precious metals are less reactive than most elements, have high lustre, are softer or more ductile, and have higher melting points than other metals...
.

The circulation of a standardized currency provides the major disadvantage to commerce of overcoming the "double coincidence of wants" necessary for barter trades to occur. For example, if a man who makes pots for a living needs a new house, he may wish to hire someone to build it for him. But he cannot make an equivalent number of pots to equal this service done for him, because even if the builder could build the house, the builder might not want the pots. Currency solved this problem by allowing a society as a whole to assign values and thus to collect goods and services effectively and to store them for later use, or to split them among several providers.

commerce includes a complex system of companies
Corporation
A corporation is created under the laws of a state as a separate legal entity that has privileges and liabilities that are distinct from those of its members. There are many different forms of corporations, most of which are used to conduct business. Early corporations were established by charter...
that try to maximize their profits by offering product
Product (business)
In general, the product is defined as a "thing produced by labor or effort" or the "result of an act or a process", and stems from the verb produce, from the Latin prōdūce ' lead or bring forth'. Since 1575, the word "product" has referred to anything produced...
s and services to the market
Market
A market is one of many varieties of systems, institutions, procedures, social relations and infrastructures whereby parties engage in exchange. While parties may exchange goods and services by barter, most markets rely on sellers offering their goods or services in exchange for money from buyers...
(which consists both of individuals and other companies) at the lowest production cost
Production, costs, and pricing
The following outline is provided as an overview of and topical guide to industrial organization:Industrial organization – describes the behavior of firms in the marketplace with regard to production, pricing, employment and other decisions...
. A system of international trade
International trade
International trade is the exchange of capital, goods, and services across international borders or territories. In most countries, such trade represents a significant share of gross domestic product...
has helped to develop the world economy but, in combination with bilateral or multilateral agreements to lower tariff
Tariff
A tariff may be either tax on imports or exports , or a list or schedule of prices for such things as rail service, bus routes, and electrical usage ....
s or to achieve free trade
Free trade
Under a free trade policy, prices emerge from supply and demand, and are the sole determinant of resource allocation. 'Free' trade differs from other forms of trade policy where the allocation of goods and services among trading countries are determined by price strategies that may differ from...
, has sometimes harmed third-world markets
Third World
The term Third World arose during the Cold War to define countries that remained non-aligned with either capitalism and NATO , or communism and the Soviet Union...
for local products (See Globalization
Globalization
Globalization refers to the increasingly global relationships of culture, people and economic activity. Most often, it refers to economics: the global distribution of the production of goods and services, through reduction of barriers to international trade such as tariffs, export fees, and import...
).
The source of this article is wikipedia, the free encyclopedia.  The text of this article is licensed under the GFDL.