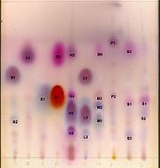 Overview
Thin layer chromatography (TLC) is a chromatography
Chromatography
Chromatography is the collective term for a set of laboratory techniques for the separation of mixtures....
technique used to separate mixtures. Thin layer chromatography is performed on a sheet of glass, plastic, or aluminum foil, which is coated with a thin layer of adsorbent material, usually silica gel
Silica gel
Silica gel is a granular, vitreous, porous form of silica made synthetically from sodium silicate. Despite its name, silica gel is a solid. It is a naturally occurring mineral that is purified and processed into either granular or beaded form...
, aluminium oxide
Aluminium oxide
Aluminium oxide is an amphoteric oxide with the chemical formula 23. It is commonly referred to as alumina, or corundum in its crystalline form, as well as many other names, reflecting its widespread occurrence in nature and industry...
, or cellulose
Cellulose
Cellulose is an organic compound with the formula , a polysaccharide consisting of a linear chain of several hundred to over ten thousand β linked D-glucose units....
(blotter paper). This layer of adsorbent is known as the stationary phase.

After the sample has been applied on the plate, a solvent
Solvent
A solvent is a liquid, solid, or gas that dissolves another solid, liquid, or gaseous solute, resulting in a solution that is soluble in a certain volume of solvent at a specified temperature...
or solvent mixture (known as the mobile phase) is drawn up the plate via capillary action
Capillary action
Capillary action, or capilarity, is the ability of a liquid to flow against gravity where liquid spontanously rise in a narrow space such as between the hair of a paint-brush, in a thin tube, or in porous material such as paper or in some non-porous material such as liquified carbon fiber, or in a...
.

How we will recognize that which compound is where?

Hello, i'm a student in college and i am doing my IB extended essay in chemistry on a subject related to chemistry. I was just wondering if there is a...
More
x