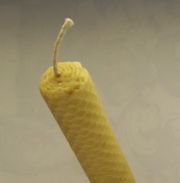 A candle wick is a string, cord, or wooden object that holds the flame of a candle
Candle
A candle is a solid block or cylinder of wax with an embedded wick, which is lit to provide light, and sometimes heat.Today, most candles are made from paraffin. Candles can also be made from beeswax, soy, other plant waxes, and tallow...
. A candle wick works by capillary action
Capillary action
Capillary action, or capilarity, is the ability of a liquid to flow against gravity where liquid spontanously rise in a narrow space such as between the hair of a paint-brush, in a thin tube, or in porous material such as paper or in some non-porous material such as liquified carbon fiber, or in a...
, drawing ("wicking") the fuel
Fuel
Fuel is any material that stores energy that can later be extracted to perform mechanical work in a controlled manner. Most fuels used by humans undergo combustion, a redox reaction in which a combustible substance releases energy after it ignites and reacts with the oxygen in the air...
to the flame. When the liquid fuel, typically melted candle wax
Wax
thumb|right|[[Cetyl palmitate]], a typical wax ester.Wax refers to a class of chemical compounds that are plastic near ambient temperatures. Characteristically, they melt above 45 °C to give a low viscosity liquid. Waxes are insoluble in water but soluble in organic, nonpolar solvents...
, reaches the flame it then vaporizes and combusts
Combustion
Combustion or burning is the sequence of exothermic chemical reactions between a fuel and an oxidant accompanied by the production of heat and conversion of chemical species. The release of heat can result in the production of light in the form of either glowing or a flame...
. The candle wick influences how the candle burns. Important characteristics of the wick include diameter, stiffness, fire-resistance, and tethering.

Large diameter wicks typically result in a larger flame, a larger pool of melted wax, and the candle burning faster. Candle wicks are normally made out of braided
Braid
A braid is a complex structure or pattern formed by intertwining three or more strands of flexible material such as textile fibres, wire, or human hair...
cotton
Cotton
Cotton is a soft, fluffy staple fiber that grows in a boll, or protective capsule, around the seeds of cotton plants of the genus Gossypium. The fiber is almost pure cellulose. The botanical purpose of cotton fiber is to aid in seed dispersal....
, and may contain a stiff core. This core was traditionally made of lead
Lead
Lead is a main-group element in the carbon group with the symbol Pb and atomic number 82. Lead is a soft, malleable poor metal. It is also counted as one of the heavy metals. Metallic lead has a bluish-white color after being freshly cut, but it soon tarnishes to a dull grayish color when exposed...
, however, lead wick cores have been banned in the U.S.
United States
The United States of America is a federal constitutional republic comprising fifty states and a federal district...
for several years by the Consumer Product Safety Commission
Consumer Product Safety Commission
The United States Consumer Product Safety Commission is an independent agency of the United States government created in 1972 through the Consumer Product Safety Act to protect "against unreasonable risks of injuries associated with consumer products." The CPSC is an independent agency that does...
, due to concerns about lead poisoning
Lead poisoning
Lead poisoning is a medical condition caused by increased levels of the heavy metal lead in the body. Lead interferes with a variety of body processes and is toxic to many organs and tissues including the heart, bones, intestines, kidneys, and reproductive and nervous systems...
. Zinc
Zinc
Zinc , or spelter , is a metallic chemical element; it has the symbol Zn and atomic number 30. It is the first element in group 12 of the periodic table. Zinc is, in some respects, chemically similar to magnesium, because its ion is of similar size and its only common oxidation state is +2...
is often used as a safer replacement for lead in this application. (The two may be differentiated by the way they write on paper – lead will, zinc won't.) Other core stiffeners, such as paper and synthetic fibers, may also be used.

Most candle wicks are impregnated or coated with wax to provide the initial fuel source when the candle is lit. While the wick is consumed in the process of burning a candle the real fuel for the flame is the melted wax. As such all wicks are treated with various flame-resistant solutions in a process known as mordanting
Mordant
A mordant is a substance used to set dyes on fabrics or tissue sections by forming a coordination complex with the dye which then attaches to the fabric or tissue. It may be used for dyeing fabrics, or for intensifying stains in cell or tissue preparations. The term mordant comes from the Latin...
. Without mordanting the wick would be destroyed by the flames and the flow of melted wax to the flame would cease.

Wicks are sometimes braided flat, so that as they burn they also curl back into the flame, thus making them self-consuming. Prior to the introduction of these wicks special scissors were used to trim the excess wick without extinguishing the flame. However, the process of triming a candle's wick with scissors usually extinguished it anyway.

In tealight
Tealight
A tealight , or nightlight, is a candle encased in a thin metal or plastic cover so that the candle can liquefy completely while lit. They are typically small, circular, wider than their height and inexpensive...
s the wick is tethered to a piece of metal to stop it from floating to the top of the molten wax and burning before the wax does. Candles designed to float in water require not only a tether for the wick, but also a seal on the bottom of the candle to prevent the wick from wicking water and extinguishing the flame.

In some birthday candles, the wick is a stub. This limits how long the candle can burn.