The city has been long famous for the production of pottery
Pottery
Pottery is the material from which the potteryware is made, of which major types include earthenware, stoneware and porcelain. The place where such wares are made is also called a pottery . Pottery also refers to the art or craft of the potter or the manufacture of pottery...
, particularly maiolica
Maiolica
Maiolica is Italian tin-glazed pottery dating from the Renaissance. It is decorated in bright colours on a white background, frequently depicting historical and legendary scenes.-Name:...
and terra-cotta wares. Nowadays the production is more and more oriented to artistic production of ceramics and terra-cotta sculptures. Other activities are mainly related to agriculture (production of grape
Grape
A grape is a non-climacteric fruit, specifically a berry, that grows on the perennial and deciduous woody vines of the genus Vitis. Grapes can be eaten raw or they can be used for making jam, juice, jelly, vinegar, wine, grape seed extracts, raisins, molasses and grape seed oil. Grapes are also...
s, olive
Olive
The olive , Olea europaea), is a species of a small tree in the family Oleaceae, native to the coastal areas of the eastern Mediterranean Basin as well as northern Iran at the south end of the Caspian Sea.Its fruit, also called the olive, is of major agricultural importance in the...
s, peach
Peach
The peach tree is a deciduous tree growing to tall and 6 in. in diameter, belonging to the subfamily Prunoideae of the family Rosaceae. It bears an edible juicy fruit called a peach...
es). 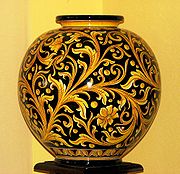 The city's name derives from the Arabic
Arabic language
Arabic is a name applied to the descendants of the Classical Arabic language of the 6th century AD, used most prominently in the Quran, the Islamic Holy Book...
"qal'at-al-ghiran" ("Hill of Vases"). It was inhabited since pre-historical times, as attested by the presence of two necropoleis dating from the second millennium BCE
2nd millennium BC
The 2nd millennium BC marks the transition from the Middle to the Late Bronze Age.Its first half is dominated by the Middle Kingdom of Egypt and Babylonia. The alphabet develops. Indo-Iranian migration onto the Iranian plateau and onto the Indian subcontinent propagates the use of the chariot...
and by numerous other archaeological findings. It was later inhabited by the Sicels pre-Roman population.

The Arabs built here a castle, which in 1030 was attacked by Ligurian troops under the Byzantine general George Maniakes, and which have left traces of Ligurian language in the current dialect. The city flourished under the Norman
Normans
The Normans were the people who gave their name to Normandy, a region in northern France. They were descended from Norse Viking conquerors of the territory and the native population of Frankish and Gallo-Roman stock...
and Hohenstaufen
Hohenstaufen
The House of Hohenstaufen was a dynasty of German kings in the High Middle Ages, lasting from 1138 to 1254. Three of these kings were also crowned Holy Roman Emperor. In 1194 the Hohenstaufens also became Kings of Sicily...
domination, becoming a renowned center for production of ceramics.

The city was almost completely destroyed by the earthquake of 1693
1693 Sicily earthquake
The 1693 Sicily earthquake refers to a powerful earthquake that struck parts of southern Italy, notably Sicily, Calabria and Malta on January 11, 1693 around 9 pm local time. This earthquake was preceded by a damaging foreshock on January 9th...
. Many public and private buildings have then been reconstructed in earthquake Baroque
Earthquake Baroque
Earthquake Baroque is a style of Baroque architecture found in places like the Philippines and Guatemala, which suffered destructive earthquakes during the 17th century and 18th century, where large public buildings, such as churches were rebuilt in a Baroque style...
style. Primarily for this reason, the city has been inserted, together with the surrounding territory in an area protected by the UNESCO
UNESCO
The United Nations Educational, Scientific and Cultural Organization is a specialized agency of the United Nations...
World Heritage program.

A collection of ancient and modern pottery and terra-cotta, dating back to the Magna Grecia period, is available in the local Museum of Pottery, created in 1965.

The main landmark of the city is the 142-step monumental Staircase of Santa Maria del Monte, built from 1608 in the old part of the town. The peculiarity is that each step is decorated with different hand-decorated ceramics, using styles and figures derived from the millennial tradition of pottery making. Once a year, on and around the day of the city's patron saint
Patron saint
A patron saint is a saint who is regarded as the intercessor and advocate in heaven of a nation, place, craft, activity, class, clan, family, or person...
, (St. James, 25 July), the staircase is illuminated with candles of different colours arranged in order to reconstruct an artistic drawing of several tens of meters.

Rijeka
Rijeka
Rijeka is the principal seaport and the third largest city in Croatia . It is located on Kvarner Bay, an inlet of the Adriatic Sea and has a population of 128,735 inhabitants...
, Croatia San Francisco, USA