Encyclopedia
Piazza Armerina is an Italian
Italy
Italy , officially the Italian Republic languages]] under the European Charter for Regional or Minority Languages. In each of these, Italy's official name is as follows:;;;;;;;;), is a unitary parliamentary republic in South-Central Europe. To the north it borders France, Switzerland, Austria and...
comune
Comune
In Italy, the comune is the basic administrative division, and may be properly approximated in casual speech by the English word township or municipality.-Importance and function:...
in the province of Enna
Province of Enna
Enna is a province in the autonomous island region of Sicily in Italy. Its capital is the city of Enna.It has an area of 2,562 km², and a total population of 177,200 . There are 20 comunes in the province, see Comunes of the Province of Enna...
of the autonomous island region of Sicily
Sicily
Sicily is a region of Italy, and is the largest island in the Mediterranean Sea. Along with the surrounding minor islands, it constitutes an autonomous region of Italy, the Regione Autonoma Siciliana Sicily has a rich and unique culture, especially with regard to the arts, music, literature,...
.

The city of Piazza (as it was called before 1862) originated during the Norman domination in Sicily (11th century), but the area was inhabited since prehistoric times. The city was flourishing also during Roman
Ancient Rome
Ancient Rome was a thriving civilization that grew on the Italian Peninsula as early as the 8th century BC. Located along the Mediterranean Sea and centered on the city of Rome, it expanded to one of the largest empires in the ancient world....
times, as showed by the notable mosaics at the patrician Villa Romana del Casale
Villa Romana del Casale
Villa Romana del Casale is a Roman villa built in the first quarter of the 4th century and located about 5 km outside the town of Piazza Armerina, Sicily, southern Italy...
. 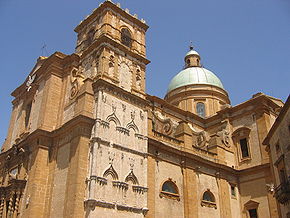 
Outside the city is the ancient church of the Priorato di Sant'Andrea (1096), founded by Count Simon of Butera, a nephew of Roger I of Sicily
Roger I of Sicily
Roger I , called Bosso and the Great Count, was the Norman Count of Sicily from 1071 to 1101. He was the last great leader of the Norman conquest of southern Italy.-Conquest of Calabria and Sicily:...
. It has important medieval frescoes.

Piazza Armerina holds an annual Palio dei Normanni, a re-enactment in costume of the entrance of the Norman Count Roger I to the city. It takes place on 12–14 August.

Piazza Armerina is one of the so-called "Lombardic" communes of Sicily, as its dialect differs notably from that of the neighbouring region. This is due to the destruction of the old Piazza by king William I of Sicily
William I of Sicily
William I , called the Bad or the Wicked, was the second king of Sicily, ruling from his father's death in 1154 to his own...
, and the subsequent repopulation by William II
William II of Sicily
William II , called the Good, was king of Sicily from 1166 to 1189. William's character is very indistinct. Lacking in military enterprise, secluded and pleasure-loving, he seldom emerged from his palace life at Palermo. Yet his reign is marked by an ambitious foreign policy and a vigorous diplomacy...
(according to other scholars, during the slightly later age of Frederick II
Frederick II, Holy Roman Emperor
Frederick II , was one of the most powerful Holy Roman Emperors of the Middle Ages and head of the House of Hohenstaufen. His political and cultural ambitions, based in Sicily and stretching through Italy to Germany, and even to Jerusalem, were enormous...
) with colonists coming from "Lombard
Lombardy
Lombardy is one of the 20 regions of Italy. The capital is Milan. One-sixth of Italy's population lives in Lombardy and about one fifth of Italy's GDP is produced in this region, making it the most populous and richest region in the country and one of the richest in the whole of Europe...
" regions of northern Italy, especially from Monferrato and Piacenza
Piacenza
Piacenza is a city and comune in the Emilia-Romagna region of northern Italy. It is the capital of the province of Piacenza...
.