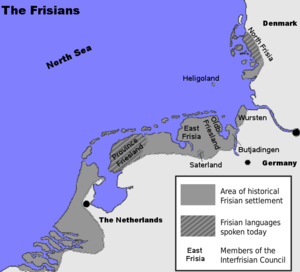 The Frisians
Frisians
The Frisians are a Germanic ethnic group native to the coastal parts of the Netherlands and Germany. They are concentrated in the Dutch provinces of Friesland and Groningen and, in Germany, East Frisia and North Frisia, that was a part of Denmark until 1864. They inhabit an area known as Frisia...
immigrated into North Frisia from the South in two waves. During the 8th century A.D. the mostly settled on the islands Heligoland
Heligoland
Heligoland is a small German archipelago in the North Sea.Formerly Danish and British possessions, the islands are located in the Heligoland Bight in the south-eastern corner of the North Sea...
, Sylt
Sylt
Sylt is an island in northern Germany, part of Nordfriesland district, Schleswig-Holstein, and well known for the distinctive shape of its shoreline. It belongs to the North Frisian Islands and is the largest island in North Frisia...
, Föhr
Föhr
Föhr is one of the North Frisian Islands on the German coast of the North Sea. It is part of the Nordfriesland district in the federal state of Schleswig-Holstein. Föhr is the second-largest North Sea island of Germany....
, Amrum
Amrum
Amrum is one of the North Frisian Islands on the German North Sea coast, south of Sylt and west of Föhr. It is part of the Nordfriesland district in the federal state of Schleswig-Holstein...
and presumably also in parts of the Eiderstedt
Eiderstedt
Eiderstedt is a peninsula in the district of Nordfriesland in the German federal state of Schleswig-Holstein.-Overview:It is approximately 30 km in length and 15 km in width and has been created through diking from three islands: Eiderstedt around Tönning, Utholm around Tating, and...
peninsula. The coastal marshlands of the mainland were settled in a second wave and after a series of storm surges the Frisians also used to settle on the higher inland geest
Geestland
Geest is a type of slightly raised landscape that occurs in the plains of in Northern Germany, the Northern Netherlands and Denmark. It is a landscape of sandy and gravelly soils, usually mantled by a heathland vegetation, comprising glacial deposits left behind after the last ice age during the...
. The Frisian Uthlande
Uthlande
Uthlande, Utlande is a term for the islands halligen and marshes off the mainland of North Frisia in modern Nordfriesland district, Germany.- History :...
region used to have its own jurisdiction, the so-called Siebenhardenbeliebung (the compact of the seven hundreds). North Frisia as a region was first recorded in 1424.

In addition to standard German
German language
German is a West Germanic language, related to and classified alongside English and Dutch. With an estimated 90 – 98 million native speakers, German is one of the world's major languages and is the most widely-spoken first language in the European Union....
, North Frisia has speakers of Low German
Low German
Low German or Low Saxon is an Ingvaeonic West Germanic language spoken mainly in northern Germany and the eastern part of the Netherlands...
, the various dialects of the North Frisian language
North Frisian language
North Frisian is a minority language of Germany, spoken by about 10,000 people in North Frisia. The language is part of the larger group of the West Germanic Frisian languages.-Classification:...
, and Danish
Danish language
Danish is a North Germanic language spoken by around six million people, principally in the country of Denmark. It is also spoken by 50,000 Germans of Danish ethnicity in the northern parts of Schleswig-Holstein, Germany, where it holds the status of minority language...
, including South Jutlandic. Today some 10,000 people still speak a dialect of North Frisian.