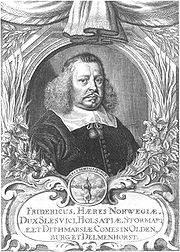 He had ambitious plans concerning the development of sea trade. With this purpose he established Friedrichstadt
Friedrichstadt
Friedrichstadt is a town in the district of Nordfriesland, in Schleswig-Holstein, Germany. It is situated on the river Eider approx. 12 km south of Husum. It was founded in 1621 by Dutch settlers...
in 1621, in sympathy with city of Glückstadt
Glückstadt
Glückstadt is a town in the Steinburg district of Schleswig-Holstein, Germany. It is located on the right bank of the Lower Elbe at the confluence of the small Rhin river, about northwest of Altona...
established in 1617 by Christian IV of Denmark
Christian IV of Denmark
Christian IV was the king of Denmark-Norway from 1588 until his death. With a reign of more than 59 years, he is the longest-reigning monarch of Denmark, and he is frequently remembered as one of the most popular, ambitious and proactive Danish kings, having initiated many reforms and projects...
. Furthermore, he attempted to find a commercial way to Russia
Russia
Russia or , officially known as both Russia and the Russian Federation , is a country in northern Eurasia. It is a federal semi-presidential republic, comprising 83 federal subjects...
and Persia that would not pass around Africa. For this reason he sent on 6 November 1633 the expedition from Hamburg
Hamburg
-History:The first historic name for the city was, according to Claudius Ptolemy's reports, Treva.But the city takes its modern name, Hamburg, from the first permanent building on the site, a castle whose construction was ordered by the Emperor Charlemagne in AD 808...
to Moscow
Moscow
Moscow is the capital, the most populous city, and the most populous federal subject of Russia. The city is a major political, economic, cultural, scientific, religious, financial, educational, and transportation centre of Russia and the continent...
under the management of a commercial agent of Otto Brüggemann and a ducal adviser, Philipp Crusius, and with Adam Olearius
Adam Olearius
Adam Olearius , born Adam Ölschläger or Oehlschlaeger, was a German scholar, mathematician, geographer and librarian...
as secretary. On 14 August 1634 the delegation arrived at Moscow. Although it was not successful in concluding a commercial agreement with Tsar Michael I of Russia, nevertheless, immediately after the return of the delegation to Gottorp
Gottorp
Gottorf Castle is a castle and estate in the city of Schleswig, Schleswig-Holstein, Germany. It is the ancestral home of the Holstein-Gottorp branch of the House of Oldenburg...
on 6 April 1635, Frederick began the preparation of the following expedition.

The difficult task of leading the country through the Thirty Years' War
Thirty Years' War
The Thirty Years' War was fought primarily in what is now Germany, and at various points involved most countries in Europe. It was one of the most destructive conflicts in European history....
confronted Frederick. He tried a policy of neutrality, which meant in practice the refusal of the union with Denmark
Denmark
Denmark is a Scandinavian country in Northern Europe. The countries of Denmark and Greenland, as well as the Faroe Islands, constitute the Kingdom of Denmark . It is the southernmost of the Nordic countries, southwest of Sweden and south of Norway, and bordered to the south by Germany. Denmark...
and inclinations toward Sweden
Sweden
Sweden , officially the Kingdom of Sweden , is a Nordic country on the Scandinavian Peninsula in Northern Europe. Sweden borders with Norway and Finland and is connected to Denmark by a bridge-tunnel across the Öresund....
. Thus, he married his daughter Hedwig Eleonore
Hedwig Eleonora of Holstein-Gottorp
Hedwig Eleonora of Holstein-Gottorp was the queen consort of King Charles X of Sweden and queen mother of King Charles XI...
to King Charles X of Sweden. Since the Swedish attempt at being the Great Power failed, Frederick's pro-Swedish policy led to the weakening of the house of Holstein-Gottorp.

Frederick as the patron of art and culture was more successful. Thus he founded on 3 September 1642 together with Duke Ludwig I of Anhalt-Köthen the Fruitbearing Society
Fruitbearing Society
The Fruitbearing Society was a German literary society founded in 1617 in Weimar by German scholars and nobility to emulate the idea of the Accademia della Crusca in Florence and similar groups already thriving in Italy, to be followed in later years also in France and Britain...
. Furthermore, he contributed to the creation of the Globe of Gottorf
Globe of Gottorf
The Globe of Gottorf is a 17th century large globe of the earth in the Kunstkammer museum in St.Petersburg in Russia. It measures 3.1 meters in diameter....
. The painter Jürgen Ovens
Jürgen Ovens
Jürgen Ovens , also known as Georg, or Jurriaen Ovens whilst in the Netherlands, was a portrait painter from North Frisia and, according to Arnold Houbraken, a pupil of Rembrandt...
worked more than 30 years for him and his successor Christian Albrecht of Holstein-Gottorp.