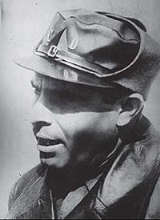 Encyclopedia
José Buenaventura Durruti Dumange (14 July 1896 – 20 November 1936) was a central figure of Spanish anarchism
Anarchism in Spain
Anarchism has historically gained more support and influence in Spain than anywhere else, especially before Francisco Franco's victory in the Spanish Civil War of 1936–1939....
during the period leading up to and including the Spanish Civil War
Spanish Civil War
The Spanish Civil WarAlso known as The Crusade among Nationalists, the Fourth Carlist War among Carlists, and The Rebellion or Uprising among Republicans. was a major conflict fought in Spain from 17 July 1936 to 1 April 1939...
.

Durruti was born in León, Spain
León, Spain
León is the capital of the province of León in the autonomous community of Castile and León, situated in the northwest of Spain. Its city population of 136,985 makes it the largest municipality in the province, accounting for more than one quarter of the province's population...
, son of Anastasia Dumangue and Santiago Durruti, a railway worker in the yard at Leon who described himself as a libertarian socialist. Buenaventura was the second of eight brothers (one was killed in the October 1934 uprising in the Asturias, another died fighting the Fascists on the Madrid front).


In the Civil War

Working closely with his comrades in the FAI and CNT Durruti helped to co-ordinate armed resistance to the military rising of Francisco Franco
Francisco Franco
Francisco Franco y Bahamonde was a Spanish general, dictator and head of state of Spain from October 1936 , and de facto regent of the nominally restored Kingdom of Spain from 1947 until his death in November, 1975...
, an effort which was to prove vital in preventing General Goded's attempt to seize control of Barcelona. During the battle for the Atarazanas Barracks, Durruti's long-time comrade and closest friend Ascaso was shot dead. Less than a week later, on 24 July 1936 Durruti led over 3,000 armed anarchists (later to become known as the Durruti Column
Durruti Column
The Durruti Column was the largest anarchist column formed during the Spanish Civil War . During the first months of the war it has come to be the most recognized and popular military organisations fighting at the republican side...
) from Barcelona
Barcelona
Barcelona is the second largest city in Spain after Madrid, and the capital of Catalonia, with a population of 1,621,537 within its administrative limits on a land area of...
to Zaragoza
Zaragoza
Zaragoza , also called Saragossa in English, is the capital city of the Zaragoza Province and of the autonomous community of Aragon, Spain...
. After a brief and bloody battle at Caspe
Caspe
Caspe or Casp is a historic town and municipality in the province of Zaragoza, in the autonomous community of Aragon, Spain. It is situated some 100 km to the east of the provincial capital, Zaragoza.-History:...
(in Aragón
Aragon
Aragon is a modern autonomous community in Spain, coextensive with the medieval Kingdom of Aragon. Located in northeastern Spain, the Aragonese autonomous community comprises three provinces : Huesca, Zaragoza, and Teruel. Its capital is Zaragoza...
), they halted at Pina de Ebro
Pina de Ebro
Pina de Ebro is a municipality located in the province of Zaragoza, Aragon, Spain. According to the 2004 census , the municipality has a population of 2,352 inhabitants....
, on the advice of a regular army officer, postponing an assault on Zaragoza.

On 12 November, having been persuaded to leave Aragón by the anarchist leader Federica Montseny
Federica Montseny
Federica Montseny i Mañé was a Spanish anarchist, intellectual and Minister of Health during the social revolution that occurred in Spain parallel to the Civil War...
on behalf of the government, Durruti led his militia to Madrid
Madrid
Madrid is the capital and largest city of Spain. The population of the city is roughly 3.3 million and the entire population of the Madrid metropolitan area is calculated to be 6.271 million. It is the third largest city in the European Union, after London and Berlin, and its metropolitan...
to aid in the defense of the city. On 19 November, he was shot while leading a counter attack in the Casa de Campo
Casa de Campo
The Casa de Campo is the largest urban park situated west of central Madrid, . It was formerly a royal hunting estate. Its area is more than ....
area. (See also Battle of Madrid.) According to author Antony Beevor
Antony Beevor
Antony James Beevor, FRSL is a British historian, educated at Winchester College and Sandhurst. He studied under the famous military historian John Keegan. Beevor is a former officer with the 11th Hussars who served in England and Germany for five years before resigning his commission...
(The Spanish Civil War, 1982
1982 in literature
The year 1982 in literature involved some significant events and new books.-Events:*La Bicyclette Bleue by Régine Deforges becomes France's best selling novel ever.-New books:...
), Durruti was killed when a companion's machine pistol
Machine pistol
A machine pistol is a handgun-style, often magazine-fed and self-loading firearm, capable of fully automatic or burst fire, and normally chambered for pistol cartridges. The term is a literal translation of Maschinenpistole, the German term for a hand-held automatic weapon...
went off by mistake. At the time, the anarchists lied and claimed he had been hit by an enemy sniper's bullet "for reasons of morale
Morale
Morale, also known as esprit de corps when discussing the morale of a group, is an intangible term used to describe the capacity of people to maintain belief in an institution or a goal, or even in oneself and others...
and propaganda
Propaganda
Propaganda is a form of communication that is aimed at influencing the attitude of a community toward some cause or position so as to benefit oneself or one's group....
".

Another account of Durruti's death, given in Durruti: The People Armed
Durruti: The People Armed
Durruti: The People Armed is a book by Abel Paz. Paz was a famous anarchist, who was active in the Spanish Civil War. The subject of the book is the Spanish anarchist Buenaventura Durruti and his life....
by Abel Paz
Abel Paz
Abel Paz was a Spanish anarchist, former combatant and historian.Abel Paz was the pen name of Diego Camacho. He was born in Almería in 1921, and moved with his family to Barcelona in 1929...
, claims that rather than being shot by a fellow soldier he was killed by distant gunfire coming from the area around the Clinical Hospital in University City (Madrid), which had been taken over by Nationalist forces. After a fight to regain control and contact was re-established with troops cut off from communications, Durruti returned temporarily to the Miguel-Angel barracks to issue orders. A message from Liberto Roig arrived informing Durruti that the Clinical Hospital was in the process of being evacuated. Alarmed, he asked his Chauffeur Julio Grave to get his car and leave immediately for the Hospital. His chauffeur gives the following testimonial:

We passed a little group of hotels which are at the bottom of this avenue (Queen Victoria Avenue) and we turned towards the right. Arriving at the big street, we saw a group of militiamen coming towards us. Durruti thought it was some young men who were leaving the front. This area was completely destroyed by the bullets coming from the Clinical Hospital, which had been taken during these days by the Moors and which dominated all the environs. Durruti had me stop the car which I parked in the angle of one of those little hotels as a precaution. Durruti got out of the auto and went towards the militiamen. He asked them where they were going. As they didn't know what to say, he ordered them to return to the front. The militiamen obeyed and Durruti returned towards the car. The rain of bullets became stronger. From the vast red heap of the clinical Hospital, the Moors and the Guardia Civil were shooting furiously. Reaching the door of the machine, Durruti collapsed, a bullet through his chest.

He died on 20 November 1936, in a makeshift operating theatre set up in what was formerly the Ritz Hotel at the age of 40. The bullet was lodged in the heart, and the diagnosis was "death caused by pleural hemorrhage". The doctors wrote a report in which the path of the bullet and the character of the wound was recorded but not the calibre of the bullet, since they hadn't removed it and there was no autopsy.

Durruti's body was transported across country to Barcelona for his funeral. Over a half million people filled the streets to accompany the cortege during its route to the Montjuïc Cemetery. It was the last large-scale public demonstration of anarchist strength of numbers during the bitter and bloody Civil War.

Hugh Thomas remarks: “the death of Durruti marked the end of the classic age of Spanish Anarchism. An Anarchist poet proclaimed that Durruti’s nobility while living would cause ‘a legion of Durrutis’ to spring up behind him.”