Encyclopedia
Brăila is a city in Muntenia
Muntenia
Muntenia is a historical province of Romania, usually considered Wallachia-proper . It is situated between the Danube , the Carpathian Mountains and Moldavia , and the Olt River to the west...
, eastern Romania
Romania
Romania is a country located at the crossroads of Central and Southeastern Europe, on the Lower Danube, within and outside the Carpathian arch, bordering on the Black Sea...
, a port on the Danube
Danube
The Danube is a river in the Central Europe and the Europe's second longest river after the Volga. It is classified as an international waterway....
and the capital of Brăila County
Braila County
Brăila is a county of Romania, in Muntenia, with the capital city at Brăila.- Demographics :In 2002, Brăila had a population of 373,174 and the population density was 78/km².*Romanians – 98%*Romas, Russians, Lipovans, Aromanians and others....
, in the close vicinity of Galaţi
Galati
Galați is a city and municipality in Romania, the capital of Galați County. Located in the historical region of Moldavia, in the close vicinity of Brăila, Galați is the largest port and sea port on the Danube River and the second largest Romanian port....
.

According to the 2002 Romanian census there were 216,292 people living within the city of Brăila, making it the 10th most populous city in Romania. 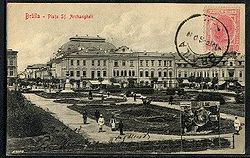 A settlement at this location on the left bank of the Danube, in Wallachia
Wallachia
Wallachia or Walachia is a historical and geographical region of Romania. It is situated north of the Danube and south of the Southern Carpathians...
, was mentioned with the name Drinago in a Spanish
Spanish language
Spanish , also known as Castilian , is a Romance language in the Ibero-Romance group that evolved from several languages and dialects in central-northern Iberia around the 9th century and gradually spread with the expansion of the Kingdom of Castile into central and southern Iberia during the...
Libro de conoscimiento ("Book of knowledge", circa 1350) and in several Catalan portolan chart
Portolan chart
Portolan charts are navigational maps based on realistic descriptions of harbours and coasts. They were first made in the 14th century in Italy, Portugal and Spain...
s (Angelino de Dalorto, 1325/1330 and Angelino Dulcert
Angelino Dulcert
Angelino Dulcert , probably also the same person known as Angelino de Dalorto , and who's real name was probably Angelino de Dulceto or Dulceti or possibly Angelí Dolcet, was an Italian-Majorcan cartographer....
, 1339). This may have been an erroneous transcription of Brillago. In Greek
Greek language
Greek is an independent branch of the Indo-European family of languages. Native to the southern Balkans, it has the longest documented history of any Indo-European language, spanning 34 centuries of written records. Its writing system has been the Greek alphabet for the majority of its history;...
documents of roughly that time, the city is referred to as Proilabum or Proilava, a Greek language adaptation of its Slavic
Slavic languages
The Slavic languages , a group of closely related languages of the Slavic peoples and a subgroup of Indo-European languages, have speakers in most of Eastern Europe, in much of the Balkans, in parts of Central Europe, and in the northern part of Asia.-Branches:Scholars traditionally divide Slavic...
name, Brailov. In German language
German language
German is a West Germanic language, related to and classified alongside English and Dutch. With an estimated 90 – 98 million native speakers, German is one of the world's major languages and is the most widely-spoken first language in the European Union....
sources, it is mentioned as Uebereyl. The origin and meaning of the name is unknown.

Brăila was attacked, plundered, and set fire to by the forces of Moldavia
Moldavia
Moldavia is a geographic and historical region and former principality in Eastern Europe, corresponding to the territory between the Eastern Carpathians and the Dniester river...
n Prince Stephen the Great
Stephen III of Moldavia
Stephen III of Moldavia was Prince of Moldavia between 1457 and 1504 and the most prominent representative of the House of Mușat.During his reign, he strengthened Moldavia and maintained its independence against the ambitions of Hungary, Poland, and the...
on February 2, 1470, during the retaliation campaign against Wallachian Prince Radu the Fair
Radu cel Frumos
Radu III the Fair, Radu III the Handsome or Radu III the Beautiful , also known by his Turkish name Radu Bey , was the younger brother of Vlad Ţepeş and voivode of the principality of Wallachia, of the four brothers he converted to Islam and entered Ottoman service...
, who had allied himself with the Ottomans. It was briefly ruled by Michael the Brave, prince of Wallachia (1595–1596).

During the 19th century, the port became one of the three most important ports on the Danube in Wallachia, the other two being Turnu and Giurgiu
Giurgiu
Giurgiu is the capital city of Giurgiu County, Romania, in the Greater Wallachia. It is situated amid mud-flats and marshes on the left bank of the Danube facing the Bulgarian city of Rousse on the opposite bank. Three small islands face the city, and a larger one shelters its port, Smarda...
. The city's greatest period of prosperity was at the end of the 19th century and in the early 20th century, when it was an important port for most of the merchandise coming in and going out of Romania.


According to the last census, from 2002, there were 216,292 people living within the city of Brăila. The ethnic makeup is as follows:

Accessible to small and medium-sized oceangoing ships, Brăila has large grain-handling and warehousing facilities. It is also an important industrial center, with metalworking, textile, food-processing, and other factories. 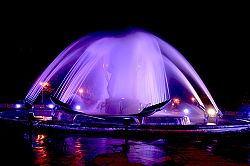 Streets radiating from near the port towards Brăila's center are crossed at symmetrical intervals by concentric streets following the geometric design of the old Ottoman fortifications.

The old center of the city has many 19th century buildings, some of them fully restored. The most important monuments are the Greek Church, erected at 1865 by the Greek community, the Sfinţii Arhangheli Church, former jāmi
Mosque
A mosque is a place of worship for followers of Islam. The word is likely to have entered the English language through French , from Portuguese , from Spanish , and from Berber , ultimately originating in — . The Arabic word masjid literally means a place of prostration...
during the Ottoman rule (until 1831), the 19th century Sfântul Nicolae Church, also from the 19th century, the Maria Filotti theatre
Maria Filotti theatre
The Maria Filotti is a theatre in Brăila, Romania.The theatre was built in 1896 as "Teatrul Rally". In 1919, it was renamed "Teatrul Comunal" , in 1949, "Teatrul del Stat Brăila - Galaţi" , and in 1969, acquired its present name, in honour of the Romanian actress, Maria Filotti .The theatre has 369...
, the Palace of Culture and its Art Museum, the History Museum, and the old Water Tower. The latter houses a restaurant and a rotation system (360° in one hour).

Another important site is the Public Garden, a park situated above the bank of the Danube with a view over the river and the Măcin Mountains
Macin Mountains
The Măcin Mountains is a mountain range in Tulcea County, Dobrogea, Romania. Part of the Northern Dobruja Massif, they are located between Danube River to the north and west, Taiţa River and Culmea Niculiţelului to the east and Casimcea Plateau to the south...
. Early in 2006 the municipality received European Union
European Union
The European Union is an economic and political union of 27 independent member states which are located primarily in Europe. The EU traces its origins from the European Coal and Steel Community and the European Economic Community , formed by six countries in 1958...
funds to renovate the old center of the city, aiming to transform Brăila into a major tourist attraction of Muntenia.

The Church of the Holy Archangels is the oldest in the city. Begun in 1667, the former mosque was transformed into an Orthodox Church in 1808.

Brăila features one of the oldest electrical tram
Tram
A tram is a passenger rail vehicle which runs on tracks along public urban streets and also sometimes on separate rights of way. It may also run between cities and/or towns , and/or partially grade separated even in the cities...
lines in Romania, inaugurated at the end of the 19th century and still in use. Brăila's bus system is operated by the town hall in cooperation with Braicar Company, with four primary bus configurations available servicing most of the city.