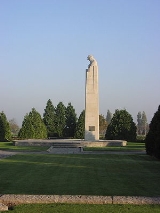 Encyclopedia
The St. Julien Memorial is a Canadian
Canada
Canada is a North American country consisting of ten provinces and three territories. Located in the northern part of the continent, it extends from the Atlantic Ocean in the east to the Pacific Ocean in the west, and northward into the Arctic Ocean...
war memorial and small commemorative park located in the village of Saint Julien , Belgium
Belgium
Belgium , officially the Kingdom of Belgium, is a federal state in Western Europe. It is a founding member of the European Union and hosts the EU's headquarters, and those of several other major international organisations such as NATO.Belgium is also a member of, or affiliated to, many...
. The memorial commemorates the Canadian First Division
1st Canadian Division
Formed in August 1914, the 1st Canadian Division was a formation of the Canadian Expeditionary Force. The division was initially made up from provisional battalions that were named after their province of origin but these titles were dropped before the division arrived in Britain on October 14,...
's participation in the Second Battle of Ypres
Second Battle of Ypres
The Second Battle of Ypres was the first time Germany used poison gas on a large scale on the Western Front in the First World War and the first time a former colonial force pushed back a major European power on European soil, which occurred in the battle of St...
of World War I
World War I
World War I , which was predominantly called the World War or the Great War from its occurrence until 1939, and the First World War or World War I thereafter, was a major war centred in Europe that began on 28 July 1914 and lasted until 11 November 1918...
which included the defence against the first poison gas attacks along the Western Front
Western Front (World War I)
Following the outbreak of World War I in 1914, the German Army opened the Western Front by first invading Luxembourg and Belgium, then gaining military control of important industrial regions in France. The tide of the advance was dramatically turned with the Battle of the Marne...
. Frederick Chapman Clemesha's sculpture, the Brooding Soldier, was selected to serve as the central feature of the monument following a design competition organized by the Canadian Battlefield Monument Commission in 1920.

The village of Saint Julien and a section of forested land called Saint Julien Wood was at a pronounced bend in the north east sector of the Ypres Salient
Ypres Salient
The Ypres Salient is the area around Ypres in Belgium which was the scene of some of the biggest battles in World War I.In military terms, a salient is a battlefield feature that projects into enemy territory. Therefore, the salient is surrounded by the enemy on three sides, making the troops...
prior to the Second Battle of Ypres. The area was also the junction between the British
British Army
The British Army is the land warfare branch of Her Majesty's Armed Forces in the United Kingdom. It came into being with the unification of the Kingdom of England and Scotland into the Kingdom of Great Britain in 1707. The new British Army incorporated Regiments that had already existed in England...
and French
French Army
The French Army, officially the Armée de Terre , is the land-based and largest component of the French Armed Forces.As of 2010, the army employs 123,100 regulars, 18,350 part-time reservists and 7,700 Legionnaires. All soldiers are professionals, following the suspension of conscription, voted in...
sectors of responsibility. The Canadian First Division was assigned the most northern section of the British line and to their left, the 45th (Algerian) Division held the southernmost end of the French line. The German Army had brought forward 168 ton
Ton
The ton is a unit of measure. It has a long history and has acquired a number of meanings and uses over the years. It is used principally as a unit of weight, and as a unit of volume. It can also be used as a measure of energy, for truck classification, or as a colloquial term.It is derived from...
s of chlorine deployed in 5,730 cylinders buried in front of their trenches, opposite Langemark-Poelkapelle
Langemark-Poelkapelle
Langemark-Poelkapelle is a municipality located in the Belgian province of West Flanders. The municipality comprises the towns of Bikschote, Langemark, and Poelkapelle. On January 1, 2006 Langemark-Poelkapelle had a total population of 7,780. The total area is 52.53 km² which gives a population...
, north of Ypres
Ypres
Ypres is a Belgian municipality located in the Flemish province of West Flanders. The municipality comprises the city of Ypres and the villages of Boezinge, Brielen, Dikkebus, Elverdinge, Hollebeke, Sint-Jan, Vlamertinge, Voormezele, Zillebeke, and Zuidschote...
. The Canadians, who had been moved into their positions only a few days earlier were manning the lines for several hundred metres along a front to the southwest of St. Julien when the German Army unleashed the first poison gas attack on the Western Front
Western Front (World War I)
Following the outbreak of World War I in 1914, the German Army opened the Western Front by first invading Luxembourg and Belgium, then gaining military control of important industrial regions in France. The tide of the advance was dramatically turned with the Battle of the Marne...
on 22 April 1915.

Pushed towards the Allied lines by a wind from the north, the initial gas attack largely drifted to the north and west of the Canadian lines, into the trenches of the French colonial troops of the French 45th (Algerian) and 87th (Territorial) Divisions, of 26th Reserve Corps.. The gas drifted across positions largely held French colonial troops who broke ranks and abandoned their trenches after witnessing the early casualties, creating an 8,000 yard (7 km) gap in the Allied line. The German infantry were also wary of the gas and, lacking reinforcements, failed to exploit the break before the First Canadian Division and assorted French troops reformed the line in scattered, hastily prepared positions 1,000 to 3,000 yards apart. In actions at Kitcheners Wood, Mauser Ridge, Pilkem Ridge and Gravenstafel Ridge the Canadians held the line and prevented a German breakthrough until they were relieved by reinforcements on the 24 April.

The memorial at Saint Julien was unveiled on 8 July 1923 by Prince Arthur, the Duke of Connaught
Prince Arthur, Duke of Connaught and Strathearn
Prince Arthur, Duke of Connaught and Strathearn was a member of the shared British and Saxe-Coburg and Gotha royal family who served as the Governor General of Canada, the 10th since Canadian Confederation.Born the seventh child and third son of Queen Victoria and Prince Albert of Saxe-Coburg and...
and the tribute was made by French Marshal Ferdinand Foch
Ferdinand Foch
Ferdinand Foch , GCB, OM, DSO was a French soldier, war hero, military theorist, and writer credited with possessing "the most original and subtle mind in the French army" in the early 20th century. He served as general in the French army during World War I and was made Marshal of France in its...
, former Supreme Commander of the Allied Powers on the Western Front
Western Front (World War I)
Following the outbreak of World War I in 1914, the German Army opened the Western Front by first invading Luxembourg and Belgium, then gaining military control of important industrial regions in France. The tide of the advance was dramatically turned with the Battle of the Marne...
. In his address, Foch stated;

After their completion in the mid-1920s, the sites became links in a chain of memorials that included 900+ Commonwealth cemeteries, making a road of remembrance or via dolorosa
Via Dolorosa
The Via Dolorosa is a street, in two parts, within the Old City of Jerusalem, held to be the path that Jesus walked, carrying his cross, on the way to his crucifixion. The current route has been established since the 18th century, replacing various earlier versions...
.

The memorial is found on the northern fringe of the village of Sint Juliaan at the intersection of the N313 road and Zonnebekestrat. During the war, the location where the memorial is located was known as Vancouver
Vancouver
Vancouver is a coastal seaport city on the mainland of British Columbia, Canada. It is the hub of Greater Vancouver, which, with over 2.3 million residents, is the third most populous metropolitan area in the country,...
Corner. Visible for miles around, the memorial stands 11 metres tall. The 'Brooding Soldier' column rises from a low circular flagstone terrace and is sculpted at its top to form the bowed head and shoulders of a Canadian soldier, his hands resting on his reversed rifle. The column and central terrace is surrounded by gardens of tall cedars trimmed into the shape of artillery shells and low cut cedars trimmed to look like shell explosions. Some of the soil that nourishes the gardens of the memorial was brought from various locations all across Canada to represent the broad spectrum of Canadian men who fought shoulder to shoulder on the battlefields of 1915.

A replica of Clemesha's St-Julien monument was incorporated into the cenotaph designed by R.W.G. Heughan which was erected in Victoria Park, Regina, Saskatchewan
Regina, Saskatchewan
Regina is the capital city of the Canadian province of Saskatchewan. The city is the second-largest in the province and a cultural and commercial centre for southern Saskatchewan. It is governed by Regina City Council. Regina is the cathedral city of the Roman Catholic and Romanian Orthodox...
, Canada
Canada
Canada is a North American country consisting of ten provinces and three territories. Located in the northern part of the continent, it extends from the Atlantic Ocean in the east to the Pacific Ocean in the west, and northward into the Arctic Ocean...
in 1926.