Encyclopedia
Boötes is a constellation
Constellation
In modern astronomy, a constellation is an internationally defined area of the celestial sphere. These areas are grouped around asterisms, patterns formed by prominent stars within apparent proximity to one another on Earth's night sky....
in the northern sky, located between 0° and +60° declination
Declination
In astronomy, declination is one of the two coordinates of the equatorial coordinate system, the other being either right ascension or hour angle. Declination in astronomy is comparable to geographic latitude, but projected onto the celestial sphere. Declination is measured in degrees north and...
, and 13 and 16 hours of right ascension
Right ascension
Right ascension is the astronomical term for one of the two coordinates of a point on the celestial sphere when using the equatorial coordinate system. The other coordinate is the declination.-Explanation:...
on the celestial sphere
Celestial sphere
In astronomy and navigation, the celestial sphere is an imaginary sphere of arbitrarily large radius, concentric with the Earth and rotating upon the same axis. All objects in the sky can be thought of as projected upon the celestial sphere. Projected upward from Earth's equator and poles are the...
. The name comes from the Greek
Greek language
Greek is an independent branch of the Indo-European family of languages. Native to the southern Balkans, it has the longest documented history of any Indo-European language, spanning 34 centuries of written records. Its writing system has been the Greek alphabet for the majority of its history;...
Βοώτης, Boōtēs, meaning herdsman
Herder
A herder is a worker who lives a possibly semi-nomadic life, caring for various domestic animals, in places where these animals wander pasture lands....
or plowman (literally, ox-driver; from boos, related to the Latin bovis, “cow”). The "ö" in the name is a diaeresis, not an umlaut
Umlaut (diacritic)
The diaeresis and the umlaut are diacritics that consist of two dots placed over a letter, most commonly a vowel. When that letter is an i or a j, the diacritic replaces the tittle: ï....
, meaning that each 'o' is to be pronounced separately.

τ Boötis
Tau Boötis
Tau Boötis is a yellow-white dwarf approximately 51 light-years away in the constellation of Boötes. The system is also a binary star system, with the secondary star being a red dwarf...
, a relatively Sun
Sun
The Sun is the star at the center of the Solar System. It is almost perfectly spherical and consists of hot plasma interwoven with magnetic fields...
-like star, is orbited by the massive hot Jupiter
Hot Jupiter
Hot Jupiters are a class of extrasolar planet whose mass is close to or exceeds that of Jupiter...
planet τ Boötis Ab
Tau Boötis Ab
Tau Boötis b, occasionally referred to as Tau Boötis Ab, is an extrasolar planet approximately 50 light-years away around the primary star of the Tau Boötis system in the constellation of Boötes. Announced in 1996 by Geoffrey Marcy and R. Paul Butler, Tau Boötis was one of the first stars...
. It was the fourth extrasolar planet
Extrasolar planet
An extrasolar planet, or exoplanet, is a planet outside the Solar System. A total of such planets have been identified as of . It is now known that a substantial fraction of stars have planets, including perhaps half of all Sun-like stars...
to be discovered and is one of the most studied. Unusually, Tau Boötis is a tidally locked to its planet. Boötes also hosts a large number of double stars suitable for viewing by amateur astronomers.

In ancient Babylon the stars of Boötes were known as SHU.PA. They were apparently depicted as the god Enlil
Enlil
Elizabeth Barrett Browning was one of the most prominent poets of the Victorian era. Her poetry was widely popular in both England and the United States during her lifetime. A collection of her last poems was published by her husband, Robert Browning, shortly after her death.-Early life:Members...
, who was the leader of the Babylonian pantheon and special patron of farmers.

Exactly whom Boötes is supposed to represent in Greek mythology
Greek mythology
Greek mythology is the body of myths and legends belonging to the ancient Greeks, concerning their gods and heroes, the nature of the world, and the origins and significance of their own cult and ritual practices. They were a part of religion in ancient Greece...
is not clear. According to one version, he was a ploughman who drove the oxen in the constellation Ursa Major
Ursa Major
Ursa Major , also known as the Great Bear, is a constellation visible throughout the year in most of the northern hemisphere. It can best be seen in April...
using his two dogs Chara and Asterion (from the constellation Canes Venatici
Canes Venatici
Canes Venatici is one of the 88 official modern constellations. It is a small northern constellation that was created by Johannes Hevelius in the 17th century. Its name is Latin for "hunting dogs", and the constellation is often depicted in illustrations as representing the dogs of Boötes the...
). The oxen were tied to the polar axis and so the action of Boötes kept the heavens in constant rotation.

Boötes was also supposed to have invented the plough
Plough
The plough or plow is a tool used in farming for initial cultivation of soil in preparation for sowing seed or planting. It has been a basic instrument for most of recorded history, and represents one of the major advances in agriculture...
. This is said to have greatly pleased Ceres, the goddess of agriculture who asked Jupiter
Jupiter (mythology)
In ancient Roman religion and myth, Jupiter or Jove is the king of the gods, and the god of the sky and thunder. He is the equivalent of Zeus in the Greek pantheon....
to give Boötes a permanent fixture in the heavens as a reward for doing this.

Another version portrays Boötes as a grape grower called Icarius
Icarius
In Greek mythology, there were two people named Icarius or Ikários .-Icarius of Sparta:One Icarius was the son of either Perieres and Gorgophone or of Oebalus and Bateia, brother of Hippocoon and Tyndareus and, through Periboea, father of Penelope, Perileos, Thoas, Damasippus, Imeusimus, Aletes...
, who one day invited the Roman god Bacchus, also called Dionysus
Dionysus
Dionysus was the god of the grape harvest, winemaking and wine, of ritual madness and ecstasy in Greek mythology. His name in Linear B tablets shows he was worshipped from c. 1500—1100 BC by Mycenean Greeks: other traces of Dionysian-type cult have been found in ancient Minoan Crete...
, to inspect his vineyards. Bacchus revealed the secret of wine making to Icarius, who was so impressed by this alcoholic beverage that he invited his friends round to sample it. Having never tasted wine before, they all drank too much and woke up the next morning with terrible hangover
Hangover
A hangover describes the sum of unpleasant physiological effects following heavy consumption of alcoholic beverages. The most commonly reported characteristics of a hangover include headache, nausea, sensitivity to light and noise, lethargy, dysphoria, diarrhea and thirst, typically after the...
s; and they made the mistaken assumption that Icarius had tried to poison them. It was decided that Icarius should pay the price with his own life, and he was swiftly murdered in his sleep. Bacchus placed Icarius in the stars to honor him.

Following another reading the constellation is identified with Arcas
Arcas
In Greek mythology, Arcas was the son of Zeus and Callisto. Callisto was a nymph in the retinue of the goddess Artemis. Zeus, being a flirtatious god, wanted Callisto for a lover. As she would not be with anyone but Artemis, Zeus cunningly disguised himself as Artemis and seduced Callisto...
, son of Zeus
Zeus
In the ancient Greek religion, Zeus was the "Father of Gods and men" who ruled the Olympians of Mount Olympus as a father ruled the family. He was the god of sky and thunder in Greek mythology. His Roman counterpart is Jupiter and his Etruscan counterpart is Tinia.Zeus was the child of Cronus...
and Callisto
Callisto (mythology)
In Greek mythology, Callisto or Kallisto was a nymph of Artemis. Transformed into a bear and set among the stars, she was the bear-mother of the Arcadians, through her son Arcas.-Origin of the myth:...
. Arcas was brought up by his maternal grandfather Lycaon, to whom one day Zeus went and had a meal. To verify that the guest was really the king of the gods, Lycaon killed his grandson and prepared a meal made from his flesh. Zeus noticed and became very angry, transforming Lycaon into a wolf and gave back life to his son. In the meantime Callisto had been transformed into a she-bear, by Zeus' wife, Hera
Hera
Hera was the wife and one of three sisters of Zeus in the Olympian pantheon of Greek mythology and religion. Her chief function was as the goddess of women and marriage. Her counterpart in the religion of ancient Rome was Juno. The cow and the peacock were sacred to her...
, who was angry at Zeus' infidelity. When he was grown up, Arcas met with the she-bear and, since obviously he didn't recognize her as his mother, he began to chase Callisto. Callisto, followed by Arcas, sheltered herself in a temple, a sacred place whose profaners were convicted to death. To avoid such fate, Zeus decided to set them in the sky, Arcas as Boötes and Callisto as Ursa Major. This is a rare version of the myth surrounding Ursa Major, as the myth usually holds that Arcas is transformed into a bear as well (becoming Ursa Minor), and in such versions Boötes has no part. Ursa Minor, and Ursa Major, are constellations whose identification only originated in later classical Greece, and in Rome, and as such Boötes kept separate associations dating from much earlier.

In Ovid's Metamorphoses VIII, Icarus is told by his father Daedalus, upon receiving the wings, to fly using the Boötes and Orion as guides. Icarus ignores the advice to run this "middle path" and subsequently drowns. 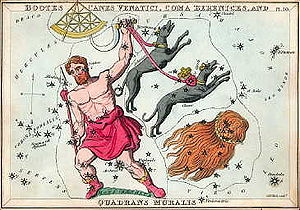 Illustrations of Boötes traditionally represent him as a herdsman with a club or staff, holding two hunting dogs on a leash and following Ursa Major
Ursa Major
Ursa Major , also known as the Great Bear, is a constellation visible throughout the year in most of the northern hemisphere. It can best be seen in April...
around the pole. 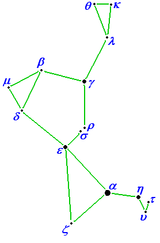 Modern diagrammatic visualizations often depict Boötes as looking like a kite
Kite
A kite is a tethered aircraft. The necessary lift that makes the kite wing fly is generated when air flows over and under the kite's wing, producing low pressure above the wing and high pressure below it. This deflection also generates horizontal drag along the direction of the wind...
.