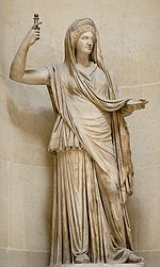 Overview
Hera was the wife and one of three sisters of Zeus
Zeus
In the ancient Greek religion, Zeus was the "Father of Gods and men" who ruled the Olympians of Mount Olympus as a father ruled the family. He was the god of sky and thunder in Greek mythology. His Roman counterpart is Jupiter and his Etruscan counterpart is Tinia.Zeus was the child of Cronus...
in the Olympian pantheon
Twelve Olympians
The Twelve Olympians, also known as the Dodekatheon , in Greek mythology, were the principal deities of the Greek pantheon, residing atop Mount Olympus. Zeus, Hera, Poseidon, Demeter, Hestia, and Hades were siblings. Ares, Hermes, Hephaestus, Athena, Apollo, and Artemis were children of Zeus...
of Greek mythology
Greek mythology
Greek mythology is the body of myths and legends belonging to the ancient Greeks, concerning their gods and heroes, the nature of the world, and the origins and significance of their own cult and ritual practices. They were a part of religion in ancient Greece...
and religion. Her chief function was as the goddess of women and marriage. Her counterpart in the religion of ancient Rome
Religion in ancient Rome
Religion in ancient Rome encompassed the religious beliefs and cult practices regarded by the Romans as indigenous and central to their identity as a people, as well as the various and many cults imported from other peoples brought under Roman rule. Romans thus offered cult to innumerable deities...
was Juno
Juno (mythology)
Juno is an ancient Roman goddess, the protector and special counselor of the state. She is a daughter of Saturn and sister of the chief god Jupiter and the mother of Mars and Vulcan. Juno also looked after the women of Rome. Her Greek equivalent is Hera...
. The cow and the peacock were sacred to her. Hera's mother was Rhea
Rhea (mythology)
Rhea was the Titaness daughter of Uranus, the sky, and Gaia, the earth, in Greek mythology. She was known as "the mother of gods". In earlier traditions, she was strongly associated with Gaia and Cybele, the Great Goddess, and was later seen by the classical Greeks as the mother of the Olympian...
and her father Cronus
Cronus
In Greek mythology, Cronus or Kronos was the leader and the youngest of the first generation of Titans, divine descendants of Gaia, the earth, and Uranus, the sky...
.

Portrayed as majestic and solemn, often enthroned, and crowned with the polos
Polos
Polos generally refers to a high cylindrical crown typically worn by mythological goddesses.Polos may also refer to:* The plural of polo* In music, the polos is one of the interlocking parts of Kotekan...
(a high cylindrical crown worn by several of the Great Goddess
Great Goddess
Great Goddess refers to the concept of an almighty goddess, or to the concept of a mother goddess, including:*Great Goddess, anglicized form of the Latin Magna Dea*Great Goddess, anglicized form of the Sanskrit Mahadevi, the Shakti sum of all goddesses...
es), Hera may bear a pomegranate
Pomegranate
The pomegranate , Punica granatum, is a fruit-bearing deciduous shrub or small tree growing between five and eight meters tall.Native to the area of modern day Iran, the pomegranate has been cultivated in the Caucasus since ancient times. From there it spread to Asian areas such as the Caucasus as...
in her hand, emblem of fertile blood and death and a substitute for the narcotic capsule of the opium
Opium
Opium is the dried latex obtained from the opium poppy . Opium contains up to 12% morphine, an alkaloid, which is frequently processed chemically to produce heroin for the illegal drug trade. The latex also includes codeine and non-narcotic alkaloids such as papaverine, thebaine and noscapine...
poppy.