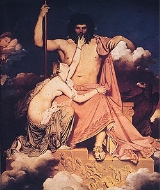 Overview
In ancient Roman religion
Religion in ancient Rome
Religion in ancient Rome encompassed the religious beliefs and cult practices regarded by the Romans as indigenous and central to their identity as a people, as well as the various and many cults imported from other peoples brought under Roman rule. Romans thus offered cult to innumerable deities...
and myth
Roman mythology
Roman mythology is the body of traditional stories pertaining to ancient Rome's legendary origins and religious system, as represented in the literature and visual arts of the Romans...
, Jupiter (Latin
Latin
Latin is an Italic language originally spoken in Latium and Ancient Rome. It, along with most European languages, is a descendant of the ancient Proto-Indo-European language. Although it is considered a dead language, a number of scholars and members of the Christian clergy speak it fluently, and...
Iuppiter) or Jove is the king of the gods
Pantheon (gods)
A pantheon is a set of all the gods of a particular polytheistic religion or mythology.Max Weber's 1922 opus, Economy and Society discusses the link between a...
, and the god of the sky
Sky
The sky is the part of the atmosphere or outer space visible from the surface of any astronomical object. It is difficult to define precisely for several reasons. During daylight, the sky of Earth has the appearance of a pale blue surface because the air scatters the sunlight. The sky is sometimes...
and thunder
Thunder
Thunder is the sound made by lightning. Depending on the nature of the lightning and distance of the listener, thunder can range from a sharp, loud crack to a long, low rumble . The sudden increase in pressure and temperature from lightning produces rapid expansion of the air surrounding and within...
. He is the equivalent
Interpretatio graeca
Interpretatio graeca is a Latin term for the common tendency of ancient Greek writers to equate foreign divinities to members of their own pantheon. Herodotus, for example, refers to the ancient Egyptian gods Amon, Osiris and Ptah as "Zeus", "Dionysus" and "Hephaestus", respectively.-Roman...
of Zeus
Zeus
In the ancient Greek religion, Zeus was the "Father of Gods and men" who ruled the Olympians of Mount Olympus as a father ruled the family. He was the god of sky and thunder in Greek mythology. His Roman counterpart is Jupiter and his Etruscan counterpart is Tinia.Zeus was the child of Cronus...
in the Greek pantheon
Twelve Olympians
The Twelve Olympians, also known as the Dodekatheon , in Greek mythology, were the principal deities of the Greek pantheon, residing atop Mount Olympus. Zeus, Hera, Poseidon, Demeter, Hestia, and Hades were siblings. Ares, Hermes, Hephaestus, Athena, Apollo, and Artemis were children of Zeus...
.

Jupiter may have begun as a sky-god, concerned mainly with wine festivals and associated with the sacred oak on the Capitol
Capitoline Hill
The Capitoline Hill , between the Forum and the Campus Martius, is one of the seven hills of Rome. It was the citadel of the earliest Romans. By the 16th century, Capitolinus had become Capitolino in Italian, with the alternative Campidoglio stemming from Capitolium. The English word capitol...
. If so, he developed a twofold character. He received the spolia opima
Spolia opima
Spolia opima refers to the armor, arms, and other effects that an ancient Roman general had stripped from the body of an opposing commander slain in single combat...
and became a god of war; as Stator he made the armies stand firm and as Victor he gave them victory.

Is it true hat Jupiter was a part of the Capitoline Triad?

Who were his parents and siblings?

So Zeus and Jupiter are not the same?

Does 'By Jove' refer to Jupiter?
More
x