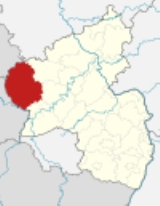 Encyclopedia
The Eifelkreis Bitburg-Prüm is a district in Rhineland-Palatinate
Rhineland-Palatinate
Rhineland-Palatinate is one of the 16 states of the Federal Republic of Germany. It has an area of and about four million inhabitants. The capital is Mainz. English speakers also commonly refer to the state by its German name, Rheinland-Pfalz ....
, Germany
Germany
Germany , officially the Federal Republic of Germany , is a federal parliamentary republic in Europe. The country consists of 16 states while the capital and largest city is Berlin. Germany covers an area of 357,021 km2 and has a largely temperate seasonal climate...
. It is bounded by (from the west and clockwise) Luxembourg
Luxembourg
Luxembourg , officially the Grand Duchy of Luxembourg , is a landlocked country in western Europe, bordered by Belgium, France, and Germany. It has two principal regions: the Oesling in the North as part of the Ardennes massif, and the Gutland in the south...
, Belgium
Belgium
Belgium , officially the Kingdom of Belgium, is a federal state in Western Europe. It is a founding member of the European Union and hosts the EU's headquarters, and those of several other major international organisations such as NATO.Belgium is also a member of, or affiliated to, many...
and the districts of Euskirchen
Euskirchen (district)
Euskirchen is a Kreis in the south-west of North Rhine-Westphalia, Germany. Neighboring districts are Aachen, Düren, Rhein-Erft-Kreis, Rhein-Sieg, Ahrweiler, Daun, Bitburg-Prüm, and the Liège province .-History:...
, Vulkaneifel, Bernkastel-Wittlich
Bernkastel-Wittlich
Bernkastel-Wittlich is a district in Rhineland-Palatinate, Germany. It is bounded by the districts of Vulkaneifel, Cochem-Zell, Rhein-Hunsrück, Birkenfeld, Trier-Saarburg and Bitburg-Prüm.- History :...
and Trier-Saarburg
Trier-Saarburg
Trier-Saarburg is a district in the west of Rhineland-Palatinate, Germany. Neighboring districts are Bitburg-Prüm, Bernkastel-Wittlich, Birkenfeld, Sankt Wendel , and Merzig-Wadern . To the west it borders Luxembourg...
.

The southwest including the town of Bitburg was a part of Luxembourg
Luxembourg
Luxembourg , officially the Grand Duchy of Luxembourg , is a landlocked country in western Europe, bordered by Belgium, France, and Germany. It has two principal regions: the Oesling in the North as part of the Ardennes massif, and the Gutland in the south...
from the 10th to the 15th century. Later it was a part of the Seventeen Provinces
Seventeen Provinces
The Seventeen Provinces were a personal union of states in the Low Countries in the 15th century and 16th century, roughly covering the current Netherlands, Belgium, Luxembourg, a good part of the North of France , and a small part of Western Germany.The Seventeen Provinces were originally held by...
and hence under Spanish
Spain
Spain , officially the Kingdom of Spain languages]] under the European Charter for Regional or Minority Languages. In each of these, Spain's official name is as follows:;;;;;;), is a country and member state of the European Union located in southwestern Europe on the Iberian Peninsula...
resp. Austria
Austria
Austria , officially the Republic of Austria , is a landlocked country of roughly 8.4 million people in Central Europe. It is bordered by the Czech Republic and Germany to the north, Slovakia and Hungary to the east, Slovenia and Italy to the south, and Switzerland and Liechtenstein to the...
n rule. After the Napoleonic Wars
Napoleonic Wars
The Napoleonic Wars were a series of wars declared against Napoleon's French Empire by opposing coalitions that ran from 1803 to 1815. As a continuation of the wars sparked by the French Revolution of 1789, they revolutionised European armies and played out on an unprecedented scale, mainly due to...
it was decided to hand this region over to Prussia
Prussia
Prussia was a German kingdom and historic state originating out of the Duchy of Prussia and the Margraviate of Brandenburg. For centuries, the House of Hohenzollern ruled Prussia, successfully expanding its size by way of an unusually well-organized and effective army. Prussia shaped the history...
.

The eastern parts of the district, including the town of Kyllburg, were property of the bishop of Trier.

On January 1 2007 the full name of the district was changed to be Eifelkreis Bitburg-Prüm instead of Landkreis.

The district covers the sparsely populated southwestern part of the Eifel
Eifel
The Eifel is a low mountain range in western Germany and eastern Belgium. It occupies parts of southwestern North Rhine-Westphalia, northwestern Rhineland-Palatinate and the south of the German-speaking Community of Belgium....
Mountains. The portions along the western borders are occupied by a common German-Belgian nature park and a German-Luxembourgian nature park. A great number of rivers rise from the Schneifel in the northwest and from the Kyllwald in the east, and runs southward to the Sauer
Sauer
The Sauer or Sûre is a river in Belgium, Luxembourg and Germany. A left tributary of the river Moselle, its total length is 173 km....
River (French Sûre), which is an affluent of the Moselle
Moselle River
The Moselle is a river flowing through France, Luxembourg, and Germany. It is a left tributary of the Rhine, joining the Rhine at Koblenz. A small part of Belgium is also drained by the Mosel through the Our....
. 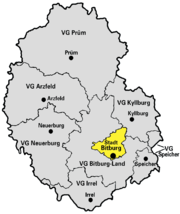