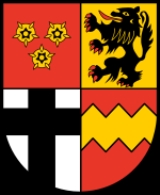 Encyclopedia
Euskirchen is a Kreis in the south-west of North Rhine-Westphalia
North Rhine-Westphalia
North Rhine-Westphalia is the most populous state of Germany, with four of the country's ten largest cities. The state was formed in 1946 as a merger of the northern Rhineland and Westphalia, both formerly part of Prussia. Its capital is Düsseldorf. The state is currently run by a coalition of the...
, Germany
Germany
Germany , officially the Federal Republic of Germany , is a federal parliamentary republic in Europe. The country consists of 16 states while the capital and largest city is Berlin. Germany covers an area of 357,021 km2 and has a largely temperate seasonal climate...
. Neighboring districts are Aachen
Aachen (district)
The district of Aachen is a district in the west of North Rhine-Westphalia, Germany. Neighboring districts are Heinsberg, Düren, Euskirchen, and also the Netherlands province of Limburg and the Belgian province of Liège.- History :...
, Düren
Düren (district)
Düren is a Kreis in the west of North Rhine-Westphalia, Germany. Neighboring districts are Heinsberg, Neuss, Rhein-Erft-Kreis, Euskirchen and Aachen.-History:...
, Rhein-Erft-Kreis
Rhein-Erft-Kreis
The Rhein-Erft-Kreis is a district in the west of North Rhine-Westphalia, Germany. Neighboring districts are Neuss, district-free Cologne, Rhein-Sieg, Euskirchen, Düren.-History:...
, Rhein-Sieg
Rhein-Sieg
The Rhein-Sieg-Kreis is a Kreis in the south of North Rhine-Westphalia, Germany. Neighboring districts are Rheinisch-Bergischer Kreis, Oberbergischer Kreis, Altenkirchen, Neuwied, Ahrweiler, Euskirchen, Rhein-Erft-Kreis, the urban district of Cologne...
, Ahrweiler
Ahrweiler
Ahrweiler is a district in the north of Rhineland-Palatinate, Germany. It is bounded by the districts Euskirchen, Rhein-Sieg and the city Bonn in the state North Rhine-Westphalia, and the districts of Neuwied, Mayen-Koblenz and Vulkaneifel.- History :The region was conquered by the Romans under...
, Daun
Daun (district)
Vulkaneifel is a district in the northwest of the state Rhineland-Palatinate, Germany. It is the least densely populated district in the state and the fourth most sparsely populated district on Germany. The administrative centre of the district is in Daun...
, Bitburg-Prüm
Bitburg-Prüm
The Eifelkreis Bitburg-Prüm is a district in Rhineland-Palatinate, Germany. It is bounded by Luxembourg, Belgium and the districts of Euskirchen, Vulkaneifel, Bernkastel-Wittlich and Trier-Saarburg.- History :...
, and the Liège province
Liège (province)
Liège is the easternmost province of Belgium and belongs to the Walloon Region. It is an area of French and German ethnicity. It borders on the Netherlands, Germany, Luxembourg, and in Belgium the provinces of Luxembourg, Namur, Walloon Brabant , and those of Flemish Brabant and Limburg . Its...
(Belgium
Belgium
Belgium , officially the Kingdom of Belgium, is a federal state in Western Europe. It is a founding member of the European Union and hosts the EU's headquarters, and those of several other major international organisations such as NATO.Belgium is also a member of, or affiliated to, many...
).

Geographically the district is inside the Eifel
Eifel
The Eifel is a low mountain range in western Germany and eastern Belgium. It occupies parts of southwestern North Rhine-Westphalia, northwestern Rhineland-Palatinate and the south of the German-speaking Community of Belgium....
hill chain. This land is hardly suitable for agriculture, and therefore in historical times the region was rather poor. The only wealth was the iron ore, but today the many forests there make the area interesting for tourists.