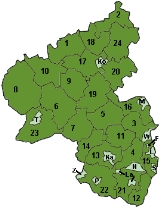 Encyclopedia
A Verbandsgemeinde is an administrative unit in the German
Germany
Germany , officially the Federal Republic of Germany , is a federal parliamentary republic in Europe. The country consists of 16 states while the capital and largest city is Berlin. Germany covers an area of 357,021 km2 and has a largely temperate seasonal climate...
Bundesländer
States of Germany
Germany is made up of sixteen which are partly sovereign constituent states of the Federal Republic of Germany. Land literally translates as "country", and constitutionally speaking, they are constituent countries...
(federal states) of Rhineland-Palatinate
Rhineland-Palatinate
Rhineland-Palatinate is one of the 16 states of the Federal Republic of Germany. It has an area of and about four million inhabitants. The capital is Mainz. English speakers also commonly refer to the state by its German name, Rheinland-Pfalz ....
and Saxony-Anhalt
Saxony-Anhalt
Saxony-Anhalt is a landlocked state of Germany. Its capital is Magdeburg and it is surrounded by the German states of Lower Saxony, Brandenburg, Saxony, and Thuringia.Saxony-Anhalt covers an area of...
.

There are 163 Verbandsgemeinden in Rhineland-Palatinate, which are grouped into the 24 districts
Districts of Germany
The districts of Germany are known as , except in the states of North Rhine-Westphalia and Schleswig-Holstein where they are known simply as ....
and subdivided into nearly 2200 Ortsgemeinden.

Most of the Verbandsgemeinden were established in 1969. Formerly the name of the administrative units was Amt. Most of the functions of municipal government for several municipalities are consolidated and administered centrally from a larger or more central town or municipality among the group, while the individual municipalities (Ortsgemeinden) still maintain a limited degree of local autonomy.