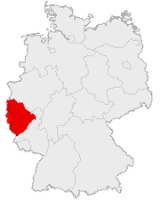 Encyclopedia
The Eifel is a low mountain range in western Germany
Germany
Germany , officially the Federal Republic of Germany , is a federal parliamentary republic in Europe. The country consists of 16 states while the capital and largest city is Berlin. Germany covers an area of 357,021 km2 and has a largely temperate seasonal climate...
and eastern Belgium
Belgium
Belgium , officially the Kingdom of Belgium, is a federal state in Western Europe. It is a founding member of the European Union and hosts the EU's headquarters, and those of several other major international organisations such as NATO.Belgium is also a member of, or affiliated to, many...
. It occupies parts of southwestern North Rhine-Westphalia
North Rhine-Westphalia
North Rhine-Westphalia is the most populous state of Germany, with four of the country's ten largest cities. The state was formed in 1946 as a merger of the northern Rhineland and Westphalia, both formerly part of Prussia. Its capital is Düsseldorf. The state is currently run by a coalition of the...
, northwestern Rhineland-Palatinate
Rhineland-Palatinate
Rhineland-Palatinate is one of the 16 states of the Federal Republic of Germany. It has an area of and about four million inhabitants. The capital is Mainz. English speakers also commonly refer to the state by its German name, Rheinland-Pfalz ....
and the south of the German-speaking Community of Belgium
German-speaking Community of Belgium
The German-speaking Community of Belgium is one of the three federal communities of Belgium. Covering an area of 854 km² within the province of Liège in Wallonia, it includes nine of the eleven municipalities of the so-called East Cantons...
. 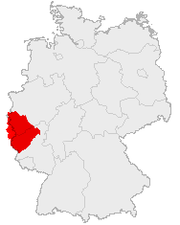 The Eifel is bordered by the river Moselle
Moselle River
The Moselle is a river flowing through France, Luxembourg, and Germany. It is a left tributary of the Rhine, joining the Rhine at Koblenz. A small part of Belgium is also drained by the Mosel through the Our....
in the south and the Rhine in the east. In the north it is limited by the hills of the High Fens
High Fens
The High Fens , which were declared a nature reserve in 1957, are an upland area, a plateau region in the province of Liège, in the east of Belgium and nearby parts of Germany, lying between the Ardennes and the Eifel highlands. It is the largest nature reserve or park in Belgium, with an area of ;...
(Hohes Venn), in the west by the Ardennes
Ardennes
The Ardennes is a region of extensive forests, rolling hills and ridges formed within the Givetian Ardennes mountain range, primarily in Belgium and Luxembourg, but stretching into France , and geologically into the Eifel...
of Belgium
Belgium
Belgium , officially the Kingdom of Belgium, is a federal state in Western Europe. It is a founding member of the European Union and hosts the EU's headquarters, and those of several other major international organisations such as NATO.Belgium is also a member of, or affiliated to, many...
and Luxembourg
Luxembourg
Luxembourg , officially the Grand Duchy of Luxembourg , is a landlocked country in western Europe, bordered by Belgium, France, and Germany. It has two principal regions: the Oesling in the North as part of the Ardennes massif, and the Gutland in the south...
.

There are several distinct chains within the Eifel.

The Eifel and its western continuation into Belgium, the Ardennes, are a part of the Variscan mountain belt
Variscan orogeny
The Variscan orogeny is a geologic mountain-building event caused by Late Paleozoic continental collision between Euramerica and Gondwana to form the supercontinent of Pangaea.-Naming:...
and belong to the Rhenish Massif (Rheinisches Schiefergebirge).

The Eifel consists mainly of Devonian
Devonian
The Devonian is a geologic period and system of the Paleozoic Era spanning from the end of the Silurian Period, about 416.0 ± 2.8 Mya , to the beginning of the Carboniferous Period, about 359.2 ± 2.5 Mya...
slate
Slate
Slate is a fine-grained, foliated, homogeneous metamorphic rock derived from an original shale-type sedimentary rock composed of clay or volcanic ash through low-grade regional metamorphism. The result is a foliated rock in which the foliation may not correspond to the original sedimentary layering...
s, sandstone
Sandstone
Sandstone is a sedimentary rock composed mainly of sand-sized minerals or rock grains.Most sandstone is composed of quartz and/or feldspar because these are the most common minerals in the Earth's crust. Like sand, sandstone may be any colour, but the most common colours are tan, brown, yellow,...
s and limestone
Limestone
Limestone is a sedimentary rock composed largely of the minerals calcite and aragonite, which are different crystal forms of calcium carbonate . Many limestones are composed from skeletal fragments of marine organisms such as coral or foraminifera....
s, laid down in an ocean south of the Old Red Continent
Euramerica
Euramerica was a minor supercontinent created in the Devonian as the result of a collision between the Laurentian, Baltica, and Avalonia cratons .300 million years ago in the Late Carboniferous tropical rainforests lay over the equator of Euramerica...
and folded and overthrust in the Variscan orogeny. The Eifel geological structures like main folds
Fold (geology)
The term fold is used in geology when one or a stack of originally flat and planar surfaces, such as sedimentary strata, are bent or curved as a result of permanent deformation. Synsedimentary folds are those due to slumping of sedimentary material before it is lithified. Folds in rocks vary in...
and overthrusts
Thrust fault
A thrust fault is a type of fault, or break in the Earth's crust across which there has been relative movement, in which rocks of lower stratigraphic position are pushed up and over higher strata. They are often recognized because they place older rocks above younger...
can be traced in a SW-NE direction far beyond the Rhine valley.

In the Tertiary
Tertiary
The Tertiary is a deprecated term for a geologic period 65 million to 2.6 million years ago. The Tertiary covered the time span between the superseded Secondary period and the Quaternary...
and Quaternary
Quaternary
The Quaternary Period is the most recent of the three periods of the Cenozoic Era in the geologic time scale of the ICS. It follows the Neogene Period, spanning 2.588 ± 0.005 million years ago to the present...
geological era, the Eifel was a site of extensive volcanic
Volcano
2. Bedrock3. Conduit 4. Base5. Sill6. Dike7. Layers of ash emitted by the volcano8. Flank| 9. Layers of lava emitted by the volcano10. Throat11. Parasitic cone12. Lava flow13. Vent14. Crater15...
activity. Some of the hills are volcanic vents. The peculiar circle-shaped lakes (maar
Maar
A maar is a broad, low-relief volcanic crater that is caused by a phreatomagmatic eruption, an explosion caused by groundwater coming into contact with hot lava or magma. A maar characteristically fills with water to form a relatively shallow crater lake. The name comes from the local Moselle...
) of the volcanic regions formed in volcanic craters. The last volcanic eruptions in the Laacher See
Laacher See
' or Laach Lake is a caldera lake and a potentially active volcano, in Rhineland-Palatinate, Germany, situated close to the cities of Koblenz , and Bonn , and closest to the towns Andernach , and Mayen . The caldera lake lies just 8 km from the river Rhine at Andernach...
volcanic site took place around 10,000 years ago and generated a huge volume of volcanic ash, now found in thin ash layers in contemporaneous sediment
Sediment
Sediment is naturally occurring material that is broken down by processes of weathering and erosion, and is subsequently transported by the action of fluids such as wind, water, or ice, and/or by the force of gravity acting on the particle itself....
s throughout Europe. The volcanism of the Eifel is thought to be partly caused by the Eifel hotspot
Eifel hotspot
The Eifel hotspot is a volcanic hotspot which is responsible for the volcanic activity which forms the volcanoes in Western Germany of northwestern Europe. It is thought to have formed the Eifel volcanic field....
, a place where hot material from deep in the mantle
Mantle (geology)
The mantle is a part of a terrestrial planet or other rocky body large enough to have differentiation by density. The interior of the Earth, similar to the other terrestrial planets, is chemically divided into layers. The mantle is a highly viscous layer between the crust and the outer core....
rises to the surface, and partly by melt-ascent at deep fracture
Fracture
A fracture is the separation of an object or material into two, or more, pieces under the action of stress.The word fracture is often applied to bones of living creatures , or to crystals or crystalline materials, such as gemstones or metal...
s in the Earth's crust. Research has shown that the volcanism is still active; the Eifel region is rising by 1–2 mm per year.
Historically, the Eifel volcanoes had inactive phases of 10,000 to 20,000 years between active phases, suggesting there is a possibility of future eruptions. 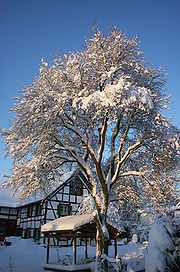