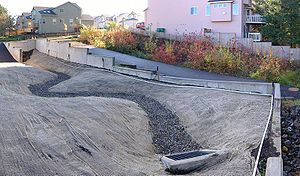 Bioswales are landscape
Landscape architecture
Landscape architecture is the design of outdoor and public spaces to achieve environmental, socio-behavioral, or aesthetic outcomes. It involves the systematic investigation of existing social, ecological, and geological conditions and processes in the landscape, and the design of interventions...
elements designed to remove silt
Silt
Silt is granular material of a size somewhere between sand and clay whose mineral origin is quartz and feldspar. Silt may occur as a soil or as suspended sediment in a surface water body...
and pollution
Pollution
Pollution is the introduction of contaminants into a natural environment that causes instability, disorder, harm or discomfort to the ecosystem i.e. physical systems or living organisms. Pollution can take the form of chemical substances or energy, such as noise, heat or light...
from surface runoff
Surface runoff
Surface runoff is the water flow that occurs when soil is infiltrated to full capacity and excess water from rain, meltwater, or other sources flows over the land. This is a major component of the water cycle. Runoff that occurs on surfaces before reaching a channel is also called a nonpoint source...
water. They consist of a swaled drainage course with gently sloped sides (less than six percent) and filled with vegetation
Vegetation
Vegetation is a general term for the plant life of a region; it refers to the ground cover provided by plants. It is a general term, without specific reference to particular taxa, life forms, structure, spatial extent, or any other specific botanical or geographic characteristics. It is broader...
, compost
Compost
Compost is organic matter that has been decomposed and recycled as a fertilizer and soil amendment. Compost is a key ingredient in organic farming. At its most essential, the process of composting requires simply piling up waste outdoors and waiting for the materials to break down from anywhere...
and/or riprap
Riprap
Riprap — also known as rip rap, rubble, shot rock or rock armour or "Rip-rap" — is rock or other material used to armor shorelines, streambeds, bridge abutments, pilings and other shoreline structures against scour, water or ice erosion.It is made from a variety of rock types, commonly granite or...
. The water's flow path, along with the wide and shallow ditch, is designed to maximize the time water spends in the swale
Swale (geographical feature)
A swale is a low tract of land, especially one that is moist or marshy. The term can refer to a natural landscape feature or a human-created one...
, which aids the trapping of pollutants and silt. Depending upon the geometry of land available, a bioswale may have a meandering or almost straight channel alignment. Biological factors also contribute to the breakdown of certain pollutants.

A common application is around parking lot
Parking lot
A parking lot , also known as car lot, is a cleared area that is intended for parking vehicles. Usually, the term refers to a dedicated area that has been provided with a durable or semi-durable surface....
s, where substantial automotive pollution is collected by the paving and then flushed by rain. The bioswale, or other type of biofilter
Biofilter
Biofiltration is a pollution control technique using living material to capture and biologically degrade process pollutants. Common uses include processing waste water, capturing harmful chemicals or silt from surface runoff, and microbiotic oxidation of contaminants in air...
, wraps around the parking lot and treats the runoff before releasing it to the watershed
Drainage basin
A drainage basin is an extent or an area of land where surface water from rain and melting snow or ice converges to a single point, usually the exit of the basin, where the waters join another waterbody, such as a river, lake, reservoir, estuary, wetland, sea, or ocean...
or storm sewer.

There are several classes of water pollutants that may be arrested with bioswales. These fall into the categories of silt, inorganic contaminants, organic chemicals and pathogen
Pathogen
A pathogen gignomai "I give birth to") or infectious agent — colloquially, a germ — is a microbe or microorganism such as a virus, bacterium, prion, or fungus that causes disease in its animal or plant host...
s. In the case of silt, these effects are resultant turbidity
Turbidity
Turbidity is the cloudiness or haziness of a fluid caused by individual particles that are generally invisible to the naked eye, similar to smoke in air. The measurement of turbidity is a key test of water quality....
to receiving waters. Inorganic compounds may be metallic compounds such as lead
Lead
Lead is a main-group element in the carbon group with the symbol Pb and atomic number 82. Lead is a soft, malleable poor metal. It is also counted as one of the heavy metals. Metallic lead has a bluish-white color after being freshly cut, but it soon tarnishes to a dull grayish color when exposed...
, chromium
Chromium
Chromium is a chemical element which has the symbol Cr and atomic number 24. It is the first element in Group 6. It is a steely-gray, lustrous, hard metal that takes a high polish and has a high melting point. It is also odorless, tasteless, and malleable...
, cadmium
Cadmium
Cadmium is a chemical element with the symbol Cd and atomic number 48. This soft, bluish-white metal is chemically similar to the two other stable metals in group 12, zinc and mercury. Similar to zinc, it prefers oxidation state +2 in most of its compounds and similar to mercury it shows a low...
and other heavy metals. Lead is the most prevalent chemical of this class, deriving from automotive residue (e.g. surface spillage of leaded gasoline). Other common inorganic compounds are macronutrients such as phosphate
Phosphate
A phosphate, an inorganic chemical, is a salt of phosphoric acid. In organic chemistry, a phosphate, or organophosphate, is an ester of phosphoric acid. Organic phosphates are important in biochemistry and biogeochemistry or ecology. Inorganic phosphates are mined to obtain phosphorus for use in...
s and nitrate
Nitrate
The nitrate ion is a polyatomic ion with the molecular formula NO and a molecular mass of 62.0049 g/mol. It is the conjugate base of nitric acid, consisting of one central nitrogen atom surrounded by three identically-bonded oxygen atoms in a trigonal planar arrangement. The nitrate ion carries a...
s. Principal sources of these nutrients are excess fertilization, which can cause eutrophication
Eutrophication
Eutrophication or more precisely hypertrophication, is the movement of a body of water′s trophic status in the direction of increasing plant biomass, by the addition of artificial or natural substances, such as nitrates and phosphates, through fertilizers or sewage, to an aquatic system...
in receiving waters. Chief organic chemicals are pesticide
Pesticide
Pesticides are substances or mixture of substances intended for preventing, destroying, repelling or mitigating any pest.A pesticide may be a chemical unicycle, biological agent , antimicrobial, disinfectant or device used against any pest...
s, frequently over-dosed in agricultural and urban
Urban area
An urban area is characterized by higher population density and vast human features in comparison to areas surrounding it. Urban areas may be cities, towns or conurbations, but the term is not commonly extended to rural settlements such as villages and hamlets.Urban areas are created and further...
landscaping. These chemicals can lead to a variety of organism
Organism
In biology, an organism is any contiguous living system . In at least some form, all organisms are capable of response to stimuli, reproduction, growth and development, and maintenance of homoeostasis as a stable whole.An organism may either be unicellular or, as in the case of humans, comprise...
poisoning and aquatic ecosystem
Aquatic ecosystem
An aquatic ecosystem is an ecosystem in a body of water. Communities of organisms that are dependent on each other and on their environment live in aquatic ecosystems. The two main types of aquatic ecosystems are marine ecosystems and freshwater ecosystems....
disturbance. Pathogens typically derive from surface runoff containing animal wastes and can lead to a variety of disease
Disease
A disease is an abnormal condition affecting the body of an organism. It is often construed to be a medical condition associated with specific symptoms and signs. It may be caused by external factors, such as infectious disease, or it may be caused by internal dysfunctions, such as autoimmune...
s in humans and aquatic organisms.

Two early examples of scientifically designed bioswales for large scale applications are found in the western United States. In 1996 for Willamette River Park in Portland, Oregon
Portland, Oregon
Portland is a city located in the Pacific Northwest, near the confluence of the Willamette and Columbia rivers in the U.S. state of Oregon. As of the 2010 Census, it had a population of 583,776, making it the 29th most populous city in the United States...
a total of 2330 lineal feet of bioswale was designed and installed to capture and prevent pollutant runoff from entering the Willamette River
Willamette River
The Willamette River is a major tributary of the Columbia River, accounting for 12 to 15 percent of the Columbia's flow. The Willamette's main stem is long, lying entirely in northwestern Oregon in the United States...
. Intermittent check dam
Check dam
A check dam is a small dam, which can be either temporary or permanent, built across a minor channel, swale, bioswale, or drainage ditch. Similar to drop structures in purpose, they reduce erosion and gullying in the channel and allow sediments and pollutants to settle. They also lower the speed of...
s were installed to further abet silt capture, with the outcome of reducing 50 percent of all suspended solids entering the river system.

A second example of a large scale designed bioswale is at the Carneros Business Park, Sonoma County, California
Sonoma County, California
Sonoma County, located on the northern coast of the U.S. state of California, is the largest and northernmost of the nine San Francisco Bay Area counties. Its population at the 2010 census was 483,878. Its largest city and county seat is Santa Rosa....
. Starting in 1997 the project design team worked with the California Department of Fish and Game
California Department of Fish and Game
The California Department of Fish and Game is a department within the government of California, falling under its parent California Natural Resources Agency. The Department of Fish and Game manages and protects the state's diverse fish, wildlife, plant resources, and native habitats...
and County of Sonoma to produce a detailed design to channel surface runoff at the perimeter of a large parking area. Surface runoff
Surface runoff
Surface runoff is the water flow that occurs when soil is infiltrated to full capacity and excess water from rain, meltwater, or other sources flows over the land. This is a major component of the water cycle. Runoff that occurs on surfaces before reaching a channel is also called a nonpoint source...
consists of building roof runoff, parking lot runoff and overland flow from properties to the north of the project site. A total of two lineal miles of bioswale was designed into the project. The purpose of the bioswale was to minimize runoff contaminants from entering Sonoma Creek
Sonoma Creek
Sonoma Creek is a stream in northern California. It is one of two principal drainages of southern Sonoma County, California, with headwaters rising in the rugged hills of Sugarloaf Ridge State Park and discharging to San Pablo Bay, the northern arm of San Francisco Bay. The watershed drained by...
. The designed bioswale channel is grass-lined, but almost linear in form. Downslope gradient is approximately four percent and cross-slope gradient is approximately six percent.