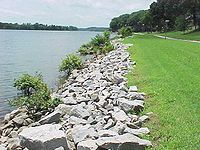 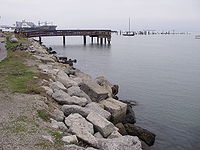 Riprap — also known as rip rap, rubble, shot rock or rock armour or "Rip-rap" — is rock
Rock (geology)
In geology, rock or stone is a naturally occurring solid aggregate of minerals and/or mineraloids.The Earth's outer solid layer, the lithosphere, is made of rock. In general rocks are of three types, namely, igneous, sedimentary, and metamorphic...
or other material used to armor
Armor (hydrology)
Armor, in hydrology and geography is the association of surface pebbles, rocks or boulders with stream beds or beaches. Most commonly hydrological armor occurs naturally; however, a man-made form is usually called riprap, when shorelines or stream banks are fortified for erosion protection with...
shore
Shore
A shore or shoreline is the fringe of land at the edge of a large body of water, such as an ocean, sea, or lake. In Physical Oceanography a shore is the wider fringe that is geologically modified by the action of the body of water past and present, while the beach is at the edge of the shore,...
lines, streambeds, bridge abutments, pilings and other shoreline structures against scour
Bridge scour
Bridge scour is the removal of sediment such as sand and rocks from around bridge abutments or piers. Scour, caused by swiftly moving water, can scoop out scour holes, compromising the integrity of a structure....
, water or ice erosion.

It is made from a variety of rock types, commonly granite
Granite
Granite is a common and widely occurring type of intrusive, felsic, igneous rock. Granite usually has a medium- to coarse-grained texture. Occasionally some individual crystals are larger than the groundmass, in which case the texture is known as porphyritic. A granitic rock with a porphyritic...
or limestone
Limestone
Limestone is a sedimentary rock composed largely of the minerals calcite and aragonite, which are different crystal forms of calcium carbonate . Many limestones are composed from skeletal fragments of marine organisms such as coral or foraminifera....
, and occasionally concrete rubble from building and paving demolition. It is used to protect coastlines and structures from erosion by the sea, rivers, or streams. It can be used on any waterways or water containment where there is potential for water erosion.

Riprap works by absorbing and deflecting the energy of waves before they reach the defended structure. The size and mass of the riprap material absorbs the impact energy of waves, while the gaps between the rocks trap and slow the flow of water, lessening its ability to erode soil or structures on the coast. The mass of riprap also provides protection against impact damage by ice or debris, which is particularly desirable for bridge supports and pilings.

It is frequently used to protect the base of old Edwardian and Victorian sea walls, which being vertical are often undermined. The riprap absorbs the impact of the waves as they shoot up the wall and then fall back down.

In the Western United States, riprap can also mean a boring and not worthy.