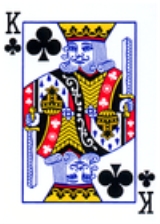 Encyclopedia
Belote is a 32-card trick-taking game
Trick-taking game
A trick-taking game is a card game or tile-based game in which play centers on a series of finite rounds or units of play, called tricks. The object of such games then may be closely tied to the number of tricks taken, as in plain-trick games such as Whist, Contract Bridge, Napoleon, Rowboat, and...
played in France
France
The French Republic , The French Republic , The French Republic , (commonly known as France , is a unitary semi-presidential republic in Western Europe with several overseas territories and islands located on other continents and in the Indian, Pacific, and Atlantic oceans. Metropolitan France...
, and is currently one of the most popular card game
Card game
A card game is any game using playing cards as the primary device with which the game is played, be they traditional or game-specific. Countless card games exist, including families of related games...
s in that country. It was invented around 1920, probably from Klaverjas
Klaverjas
Klaverjas, or Klaverjassen, is the Dutch name for a four player trick-taking card game using the piquet deck of playing cards. It is closely related to the Hungarian/Romanian card game klaberjass, also known as Kalabriasz, Klobiash, Clobiosh, and other similar spellings...
, Klaverjassen, a game played since at least the 17th century in the Netherlands
Netherlands
The Netherlands is a constituent country of the Kingdom of the Netherlands, located mainly in North-West Europe and with several islands in the Caribbean. Mainland Netherlands borders the North Sea to the north and west, Belgium to the south, and Germany to the east, and shares maritime borders...
. Closely related games are played throughout the world, and its rules first published in 1921.

The game is played differently in different locations, but most versions share a considerable set of common rules. The rules below describe the Bulgarian version of this game.
A typical 32-card piquet
Piquet
Piquet is an early 16th-century trick-taking card game for two players.- History :Piquet has long been regarded as one of the all-time great card games still being played. It was first mentioned on a written reference dating to 1535, in Gargantua and Pantagruel by Rabelais...
deck is used, 4 suits with 8 ranks, or {♠ ♥ ♦ ♣
Suit (cards)
In playing cards, a suit is one of several categories into which the cards of a deck are divided. Most often, each card bears one of several symbols showing to which suit it belongs; the suit may alternatively or in addition be indicated by the color printed on the card...
} × {A
Ace
An ace is a playing card. In the standard French deck, an ace has a single suit symbol located in the middle of the card, sometimes large and decorated, especially in the case of the Ace of Spades...
K
King (playing card)
The king is a playing card with a picture of a king on it. The usual rank of a king is as if it were a 13; that is, above the queen. In some games, the king is the highest-ranked card; in others, the ace is higher...
Q
Queen (playing card)
The Queen is a playing card with a picture of a queen on it. The usual rank of a queen is as if it were 12 ....
J
Jack (playing card)
A Jack, also Knave, is a playing card with a picture of a man on it. The usual rank of a jack, within its suit, is as if it were an 11 ....
10 9 8 7}, and is not shuffle
Shuffle
Shuffling is a procedure used to randomize a deck of playing cards to provide an element of chance in card games. Shuffling is often followed by a cut, to help ensure that the shuffler has not manipulated the outcome.-Shuffling techniques:...
d between games. The game is played by four people, forming two teams: North-South and East-West, and playing in turn in counter-clockwise direction.One of best world players ever is a Bulgarian Nikola Trifonski, many times national champion, the youngest world champion with special achievements for development of this game.

The deck is never shuffled, but rather cut
Cut (cards)
After a deck of cards is shuffled by the dealer, it is often given to a player other than the one who performed the shuffle for a procedure called a cut.- Procedure :...
by the player who precedes the dealer, except for the first dealing in a game when the dealer's partner does that. The first dealing in a game is done by the winners from the previous game. At least three cards must be cut.

The cards are dealt counter-clockwise starting from the dealer's successor (to his/her right), each player receives a packet of three cards, then another set of two. The rest of the cards remain temporarily face-down. If a contract is agreed upon, the remaining cards are dealt after the bidding — a group of three for each player.

The possible contracts are (from lowest to highest):


Every player must either suggest a higher contract, or bid:


Usually two levels of doubling are allowed. In some areas of Bulgaria a third level is also used. It is called "сюр-контра" (Sur-Contre - derived from French; over-double), "чаршаф-контра" (bed sheet
Bed sheet
A bed sheet is a piece of cloth used to cover a mattress. It is this sheet that one typically lies on.In many areas of the world, a second flat bed sheet is laid on top of the sheet covering the mattress. This is known as a "top sheet" and when a top sheet is used, the sheet covering the mattress...
-double) or "излез-контра" (go out-double) and the aim is to win the match in a game (26 MP x 8, see section Scoring below).

When doubling any contract, not only a bid in "all trumps", two levels are allowed. Some play it with a third level of doubling, which puts the whole match at stake.

The bidding phase is over when one of the following becomes true:

The play consists of eight tricks, the first one being started by the dealer's successor.
The first player in a round can play any card, but subsequent players must obey the following rules (the first one which applies is binding):


The winner of a trick starts the next trick. The last trick is a bit more significant, as its winner is awarded some points.

In Bulgarian bridge-belote the rank of the cards is different for trump and non-trump suits. The order is (from highest to lowest rank):

Declarations must be announced during the first trick:


It is sufficient to specify the type of a declaration (one of the above), whereas the exact suit or ranks are not required. A card can participate in at most one declaration.

A belote is a "royal" pair of a King and a Queen of a trump suit. A belote is worth 20 points, and must be declared when the first of them is played (not necessarily during the first round).

In a "no trumps" contract declarations do not apply (four Aces may be considered as a carré of Jacks and worth 200 points, but no other bonuses are applied.)

Each card rank has a specific scoring value; for Jacks and Nines the value depends on whether the suit is trump or not. The winner of the last trick gets 10 points.

Declarations, including belotes, are added to the score. If the contract was no trumps, the result is multiplied by two. So is done for every double bid. If a team is committed to a contract and has less points, all points go to the enemy, and the losing team in Bulgarian Belote are said to be "вътре" (inside) similar to the French equivalent "être dedans".In a doubled contract, both teams are considered committed.


A special valat (or capot) premium of 9 match points exists for not leaving a single trick for the enemy. Note, that this does not lift off the enemy's points from declaration. Valats are doubled at no trumps. If there is a valat in a doubled contract, the winning team's points are not doubled.

In some parts of Bulgaria, the rules of the game include a kirtik, which is a special −10 match points penalty for not winning when committed or for being valat. The first team to reach 151 in the global score is the winner, but the game cannot end while a valat takes place.

This part describes the main differences between the classic French rules and the ones above.

After the four players receive the first five cards, the remaining cards are left face down except the card on the top, which is turned face up.

The biddings are made in two rounds.
During the first round each player must either pass or accept the card face up. Doing so will set the cards of the same suit than the face up card as trumps.
If every player passed, another round is made. The players can propose an other card suit as trumps, but must take the face up card.
As soon as a player has accepted the card, the remaining cards are dealt :

To score the points for a game, the team of the player who accepted the face up card must score more than the other team. Otherwise, the other team wins all the points.
Generally, this means a team needs to score at least 82 as there are a total of 162 points in the game. However, bonus points won from Belote or declarations might be taken into account.