Encyclopedia
Baloot is a popular trick card game
Trick-taking game
A trick-taking game is a card game or tile-based game in which play centers on a series of finite rounds or units of play, called tricks. The object of such games then may be closely tied to the number of tricks taken, as in plain-trick games such as Whist, Contract Bridge, Napoleon, Rowboat, and...
played in Saudi Arabia
Saudi Arabia
The Kingdom of Saudi Arabia , commonly known in British English as Saudi Arabia and in Arabic as as-Sa‘ūdiyyah , is the largest state in Western Asia by land area, constituting the bulk of the Arabian Peninsula, and the second-largest in the Arab World...
, which is similar to the French game Belote
Belote
Belote is a 32-card trick-taking game played in France, and is currently one of the most popular card games in that country. It was invented around 1920, probably from Klaverjas, Klaverjassen, a game played since at least the 17th century in the Netherlands...
.


History of the game

The game is related to the French Belote. The similarity between the game rules strongly suggests that Baloot was originally Belote. It may have reached Saudi Arabia
Saudi Arabia
The Kingdom of Saudi Arabia , commonly known in British English as Saudi Arabia and in Arabic as as-Sa‘ūdiyyah , is the largest state in Western Asia by land area, constituting the bulk of the Arabian Peninsula, and the second-largest in the Arab World...
through the French minority in the country. The few differences between the two games are because of the bad translations and the heavy French tongue. Today the game is played in every city in Saudi Arabia by young and old people.

There are four players in partnerships of two teams. A standard 32-card
Playing card
A playing card is a piece of specially prepared heavy paper, thin cardboard, plastic-coated paper, cotton-paper blend, or thin plastic, marked with distinguishing motifs and used as one of a set for playing card games...
set is used. 8 for each player. There are two ways of playing "Judges suit, " and the other way call "Sǔn ". the suits
Suit (cards)
In playing cards, a suit is one of several categories into which the cards of a deck are divided. Most often, each card bears one of several symbols showing to which suit it belongs; the suit may alternatively or in addition be indicated by the color printed on the card...
ranking are :

Assume the Hokom suit is the Sherya (Clubs) ♣ (for example) 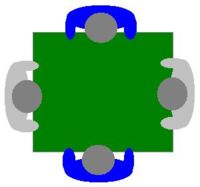 The two members of each team are seated across each other at a table in such a way that no player can see the cards of other players .

The first dealer is chosen at random and after each hand the turn to deal passes to the right.
The cards are shuffled by the dealer, and cut by the player on the left.
The player on the left of the dealer can either say "go" without cutting the deck, shuffling it (just once), take the first card as the public card, or can give the bottom three cards to the teammate. If the dealer gives a player a card and was mistakenly flipped, the player has no right to refuse it, unless it is an Ace, then the shuffling starts again from the same dealer.

If someone takes the card, as (for example) Hokom, any player has the right to refuse and take it as Sun. But if the person took the public card as Sun, then only the person with the higher priority can take the card.

"Ashkal", it is said when a player doesn't want the public card, but wants it for their teammate, just to receive 3 cards instead of 2. note: only the dealer and the player to the left of the dealer have the right to call Ashkal. If a player calls Ashkal where they do not have the privilege, the player is forced to take the public card as Sun. If the card was an ace, the player has no right to say Ashkal, if they do, they are forced to buy it as Sun.

If a player has only zero cards - 7, 8 or 9 of any suit, he may choose to force everyone to abandon this turn with no points to any team (Kawesh/Saneen), where he buys the public card as Sun, and lies his cards face up (If he feels he has an advantage he may still buy the card normally). However, in "Second" the player may not ask for this turn to be abandoned.

If all the players choose to not take the card, then the dealer calls, "Second", which means there is another chance in taking the card. If someone takes it as Sun, then no one else can buy it over him even if they were of a higher priority. That is a significant advantage of buying Sun in the second round over the first; that no one else can take it from you even if they were of a higher priority. They lose that right by saying no in the second round. But if someone takes it as Hokom, then the Hokom must be something different from the suit of the public card because it is on the second mode. Other players can take the card as Sun. The player that takes it as Hokom, has the option to choose between three suits before lifting up the two cards that the dealer just gave. Or it is Sun if the player lifts up the two cards before naming a suit for Hokom. There is not "Ashkal" in the second round.

The Player on the right side of the Dealer starts the round. Players counterclockwise must follow suit if they can; a player who has no cards of the suit led can play any card. Or he/she should play one of the Judges cards in case of Hokom rounds. each trick score should be added to the total scores until one of the team reaches the 152 points and win the game. (see Scores section below)

In case of Hokom, if the first leading card played Hokom, other players should throw the Hokom card, if or example the card played was a King of hearts and the Hokom is hearts, the next player should surrender a card that is bigger in value of the King.

Once a round is over, the score of each team should be added to the total score .Each card has a score rank as the following:

Note: The team that takes the last trick always add 10 to their score before calculating round score.


In case of Sǔn rounds

In case of Hokom rounds

Bonuses are free extra points one of the two teams can earn during a Round. Bonuses also called Projects (Arabic: مشروع). Projects (except for Baloot) are always declared in the first turn and shown in the second turn.

There are several types of bonuses in Baloot. The following list describes each of them starting from the minimum .

A player declaration Sira, means that he has a 3 serial cards, according to Global cards sorting (A,K,Q,J,10,9,8,7). for example: or
or any other 3 serial cards.

A player declaration 100, means one of the three positions:

or any other 5 serial cards.

, this is only in case of Hokom because in Sǔn rounds 4 aces means 400.

A player declaration Baloot, means that he has the King and the Queen cards of the Judges suit, for example:

The Judges cards of Hokom round are Clubs and a player has:
Bonus:

2- If players from different teams has the same level project (e.g.: Two Sira's) Only the one with the highest card can show the project and get points for it.

5- In Double, Three and Four, Projects are calculated X2, X3, X4 receptively. (See "Multiple scores" below.) (Except for "Baloot", which is always 2).

6- If one player of a team gets to show his project that entitles his team mate to show his/her project too. That is why if many projects are declared, it is wise to wait for everyone to say what is his highest card, and see if you can show your project or not.

7- If a player has higher project than the player before him/her, but forgets to show it, the other player has the right to show his/her project before he/she plays his/her third card.

While naming the round by one of the teams, The other team may keep silence or say Double (locked or open), The one who bought the card (and only him/her) can raise to Triple. Then the one who said double (and only him/her) can raise it further Four. Here the buyer can raise it to the limit by saying Gahwa. (Sun can only go up to double, and only when only 1 team has more than 100 points. If both teams are above 100 or below it, Sun can not be doubled).

By saying Double, the competition will be harder because the round scores will be twice as much as the normal round. The Three means 3 times as much as the normal round and Four means four. The main purposes of saying "Double or Four" is to change the way of playing and increase points, since when the game is doubled (or more) points aren't divided, the team with most points takes all. If you were playing in "locked" "Double or Four", the one who says "Double" or "Four" has the option of locking or opening the Hokom. In case its locked you cant use the Judged suit as a first card in any trick, you can only use them when you don't have the suit that the other player has played, or don't have any other suit to play as a first card in the trick. Otherwise, "if its Three or Gahwa" you can use any suit you want, even if it was the Judged suit.

The Gahwa challenege will end the whole game at once for the round winner.