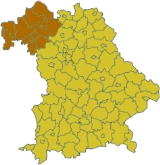 Encyclopedia
Lower Franconia is one of the three administrative region
Regierungsbezirk
In Germany, a Government District, in German: Regierungsbezirk – is a subdivision of certain federal states .They are above the Kreise, Landkreise, and kreisfreie Städte...
s of Franconia
Franconia
Franconia is a region of Germany comprising the northern parts of the modern state of Bavaria, a small part of southern Thuringia, and a region in northeastern Baden-Württemberg called Tauberfranken...
in Bavaria
Bavaria
Bavaria, formally the Free State of Bavaria is a state of Germany, located in the southeast of Germany. With an area of , it is the largest state by area, forming almost 20% of the total land area of Germany...
(seven regions), Germany
Germany
Germany , officially the Federal Republic of Germany , is a federal parliamentary republic in Europe. The country consists of 16 states while the capital and largest city is Berlin. Germany covers an area of 357,021 km2 and has a largely temperate seasonal climate...
(22 regions in five Federal States, 11 Federal States are not subdivided into regions).

The district was formed in 1817 under the name of Untermainkreis (Lower Main District) and renamed in 1837 as Unterfranken und Aschaffenburg (Lower Franconia and Aschaffenburg). In 1933 the regional Nazi Gauleiter
Gauleiter
A Gauleiter was the party leader of a regional branch of the NSDAP or the head of a Gau or of a Reichsgau.-Creation and Early Usage:...
Otto Hellmuth
Otto Hellmuth
Otto Hellmuth was a member of the Nazi Party.Born at Markt Einersheim, he was Gauleiter of the German region of Lower Franconia from 1928 to 1945. His home and office were in Würzburg, the capital of the Gau Mainfranken. By 1935, Hellmuth had his Gau renamed as Mainfranken...
insisted on renaming the district Mainfranken, but after 1945 the name Unterfranken was resurrected.

Unterfranken is the north-west part of Franconia and consists of three district-free cities ("Kreisfreie Städte") and nine country districts ("Landkreise").

The major portion of the Franconian wine region
Franconia (wine region)
Franconia is a region for quality wine in Germany situated in the north west of Bavaria in the district of Franconia, and is the only wine region in the federal state of Bavaria...
is situated in Lower Franconia.

The Coat of Arms includes the Arms of Duchy of Franconia
Duchy of Franconia
The Duchy of Franconia was one of the stem duchies of Germany during the formative period of the Holy Roman Empire in the 10th century, part of former Frankish Austrasia.But unlike the others Franconia did not evolve into a stable political entity...
in the upper portion, the “Rennfähnlein,” a banner, quarterly argent (silver) and gules (red), on a lance or (gold), in bend, on an azure (blue) field, associated with Würzburg
Bishopric of Würzburg
The Bishopric of Würzburg was a prince-bishopric in the Holy Roman Empire, located in Lower Franconia, around the city of Würzburg, Germany. Würzburg was a diocese from 743. In the 18th century, its bishop was often also Bishop of Bamberg...
in the lower left quadrant, and a white/silver wheel on a red field symbolizing the clerical state of Mainz
Archbishopric of Mainz
The Archbishopric of Mainz or Electorate of Mainz was an influential ecclesiastic and secular prince-bishopric in the Holy Roman Empire between 780–82 and 1802. In the Roman Catholic Church hierarchy, the Archbishop of Mainz was the primas Germaniae, the substitute of the Pope north of the Alps...
, in the lower right quadrant.

Until the municipal reform ( "Kreisreform" ) in June 1972 Lower Franconia had 22 country districts,
16 of them were attached to the other six existing country districts
Aschaffenburg, Bad Kissingen, Kitzingen, Miltenberg, Schweinfurt, Würzburg
or united to one of the three new country districts Haßberge, Main-Spessart, Rhön-Grabfeld.