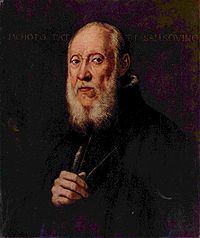 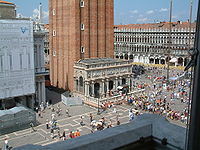 Jacopo d'Antonio Sansovino (July 2, 1486 – November 27, 1570) was an Italian
Italy
Italy , officially the Italian Republic languages]] under the European Charter for Regional or Minority Languages. In each of these, Italy's official name is as follows:;;;;;;;;), is a unitary parliamentary republic in South-Central Europe. To the north it borders France, Switzerland, Austria and...
sculptor and architect, known best for his works around the Piazza San Marco
Piazza San Marco
Piazza San Marco , is the principal public square of Venice, Italy, where it is generally known just as "the Piazza". All other urban spaces in the city are called "campi"...
in Venice. Andrea Palladio
Andrea Palladio
Andrea Palladio was an architect active in the Republic of Venice. Palladio, influenced by Roman and Greek architecture, primarily by Vitruvius, is widely considered the most influential individual in the history of Western architecture...
, in the Preface to his Quattro Libri was of the opinion that Sansovino's Biblioteca Marciana
Biblioteca Marciana
The Biblioteca Nazionale Marciana is a library and Renaissance building in Venice, northern Italy; it is one of the earliest surviving public manuscript depositories in the country, holding one of the greatest classical texts collections in the world. The library is named after St. Mark, the...
was the best building erected since Antiquity. Giorgio Vasari
Giorgio Vasari
Giorgio Vasari was an Italian painter, writer, historian, and architect, who is famous today for his biographies of Italian artists, considered the ideological foundation of art-historical writing.-Biography:...
uniquely printed his Vita
Lives of the Most Excellent Painters, Sculptors, and Architects
The Lives of the Most Excellent Italian Painters, Sculptors, and Architects, from Cimabue to Our Times, or Le Vite de' più eccellenti pittori, scultori, e architettori da Cimabue insino a' tempi nostri, as it was originally known in Italian, is a series of artist biographies written by 16th century...
of Sansovino separately.

He was born in Florence
Florence
Florence is the capital city of the Italian region of Tuscany and of the province of Florence. It is the most populous city in Tuscany, with approximately 370,000 inhabitants, expanding to over 1.5 million in the metropolitan area....
and apprenticed with Andrea Sansovino
Andrea Sansovino
Andrea dal Monte Sansovino or Andrea Contucci del Monte San Savino was an Italian sculptor active during the High Renaissance...
whose name he subsequently adopted, changing his name from Jacopo Tatti.

In Rome
Rome
Rome is the capital of Italy and the country's largest and most populated city and comune, with over 2.7 million residents in . The city is located in the central-western portion of the Italian Peninsula, on the Tiber River within the Lazio region of Italy.Rome's history spans two and a half...
he attracted the notice of Bramante
Donato Bramante
Donato Bramante was an Italian architect, who introduced the Early Renaissance style to Milan and the High Renaissance style to Rome, where his most famous design was St...
and Raphael and made a wax
Wax
thumb|right|[[Cetyl palmitate]], a typical wax ester.Wax refers to a class of chemical compounds that are plastic near ambient temperatures. Characteristically, they melt above 45 °C to give a low viscosity liquid. Waxes are insoluble in water but soluble in organic, nonpolar solvents...
model of the Deposition of Christ for Perugino to use.
He returned to Florence
Florence
Florence is the capital city of the Italian region of Tuscany and of the province of Florence. It is the most populous city in Tuscany, with approximately 370,000 inhabitants, expanding to over 1.5 million in the metropolitan area....
in 1511 where he received commissions for marble sculpture
Marble sculpture
Marble sculpture is the art of creating three-dimensional forms from marble. Sculpture is among the oldest of the arts. Even before painting cave walls, early humans fashioned shapes from stone. From these beginnings, artifacts have evolved to their current complexity...
s of St. James
Saint James the Great
James, son of Zebedee was one of the Twelve Apostles of Jesus. He was a son of Zebedee and Salome, and brother of John the Apostle...
for the Duomo
Santa Maria del Fiore
The Basilica di Santa Maria del Fiore is the cathedral church of Florence, Italy. The Duomo, as it is ordinarily called, was begun in 1296 in the Gothic style to the design of Arnolfo di Cambio and completed structurally in 1436 with the dome engineered by Filippo Brunelleschi...
and a Bacchus
Dionysus
Dionysus was the god of the grape harvest, winemaking and wine, of ritual madness and ecstasy in Greek mythology. His name in Linear B tablets shows he was worshipped from c. 1500—1100 BC by Mycenean Greeks: other traces of Dionysian-type cult have been found in ancient Minoan Crete...
, now in the Bargello
Bargello
The Bargello, also known as the Bargello Palace or Palazzo del Popolo is a former barracks and prison, now an art museum, in Florence, Italy.-Terminology:...
. His proposals for sculpture to adorn the façade
Facade
A facade or façade is generally one exterior side of a building, usually, but not always, the front. The word comes from the French language, literally meaning "frontage" or "face"....
of the Church of San Lorenzo
Basilica di San Lorenzo di Firenze
The Basilica di San Lorenzo is one of the largest churches of Florence, Italy, situated at the centre of the city’s main market district, and the burial place of all the principal members of the Medici family from Cosimo il Vecchio to Cosimo III...
, however, were rejected by Michelangelo
Michelangelo
Michelangelo di Lodovico Buonarroti Simoni , commonly known as Michelangelo, was an Italian Renaissance painter, sculptor, architect, poet, and engineer who exerted an unparalleled influence on the development of Western art...
, who was in charge of the scheme, to whom he wrote a bitter letter of protest in 1518.

In the period of 1510-17 he shared a studio with the painter Andrea del Sarto
Andrea del Sarto
Andrea del Sarto was an Italian painter from Florence, whose career flourished during the High Renaissance and early Mannerism. Though highly regarded during his lifetime as an artist senza errori , his renown was eclipsed after his death by that of his contemporaries, Leonardo da Vinci,...
, with whom he shared models. Like all sixteenth-century Italian architects, Sansovino devoted considerable energy to elaborate but temporary structures related to courtly ritual. The triumphant entry of Pope Leo X
Pope Leo X
Pope Leo X , born Giovanni di Lorenzo de' Medici, was the Pope from 1513 to his death in 1521. He was the last non-priest to be elected Pope. He is known for granting indulgences for those who donated to reconstruct St. Peter's Basilica and his challenging of Martin Luther's 95 Theses...
into Florence in 1515 was a highpoint of this genre. He subsequently returned to Rome where he stayed for nine years, leaving for Venice
Venice
Venice is a city in northern Italy which is renowned for the beauty of its setting, its architecture and its artworks. It is the capital of the Veneto region...
in the year of the Sack of Rome
Sack of Rome
The city of Rome has been sacked on several occasions. Among the most famous:*Battle of the Allia – Rome is sacked by the Gauls after the Battle of the Allia*Sack of Rome – Rome is sacked by Alaric, King of the Visigoths...
.

In 1529, Sansovino became chief architect and superintendent of properties (Protomaestro or Proto) to the Procurators of San Marco, making him one of the most influential artists in Venice. The appointment came with a salary of 80 ducats and an apartment near the clocktower in San Marco. Within a year his salary was raised to 180 ducats per year. His masterworks embody prominent structures and buildings in central Venice found near Piazza San Marco
Piazza San Marco
Piazza San Marco , is the principal public square of Venice, Italy, where it is generally known just as "the Piazza". All other urban spaces in the city are called "campi"...
, specifically the rusticated Zecca
Zecca
Zecca, Italian for "mint" , may refer to:* The historical Papal mint located in Vatican City.* The mint of the Italian Republic, Istituto Poligrafico e Zecca dello Stato, which is still active....
(public mint), the highly decorated Loggetta and its sculptures adjoining the Campanile
St Mark's Campanile
St Mark's Campanile is the bell tower of St Mark's Basilica in Venice, Italy, located in the Piazza San Marco. It is one of the most recognizable symbols of the city....
, and various statues and relief
Relief
Relief is a sculptural technique. The term relief is from the Latin verb levo, to raise. To create a sculpture in relief is thus to give the impression that the sculpted material has been raised above the background plane...
s for the Basilica of San Marco. He also helped rebuild a number of buildings, churches, palaces, and institutional buildings including the churches of San Zulian
San Zulian
The Chiesa di San Giuliano , commonly called San Zulian in the Venetian dialect, is a church in Venice.It is situated on the Merceria, the main shopping street of the city. Originally a structure from the 9th century; it underwent a number of reconstructions, including likely after the 1105 fire of...
, San Francesco della Vigna, San Martino, San Geminiano (now destroyed), Santo Spirito in Isola, and the church of the Incurabili. Among palaces and buildings are the Scuola Grande della Misericordia (early plans), Ca' de Dio, Palazzo Dolfin, Palazzo Corner, Palazzo Moro, and the Fabbriche Nuove di Rialto
Rialto
The Rialto is and has been for many centuries the financial and commercial centre of Venice. It is an area of the San Polo sestiere of Venice, Italy, also known for its markets and for the Rialto Bridge across the Grand Canal....
.

His masterpiece is the Library of Saint Mark's, the Biblioteca Marciana
Biblioteca Marciana
The Biblioteca Nazionale Marciana is a library and Renaissance building in Venice, northern Italy; it is one of the earliest surviving public manuscript depositories in the country, holding one of the greatest classical texts collections in the world. The library is named after St. Mark, the...
, one of Venice's most richly decorated Renaissance structures, which stands in front of the Doge's palace, across the piazzetta. Construction spanned fifty years and cost over 30,000 ducats. In it he successfully made the architectural language of classicism
Classicism
Classicism, in the arts, refers generally to a high regard for classical antiquity, as setting standards for taste which the classicists seek to emulate. The art of classicism typically seeks to be formal and restrained: of the Discobolus Sir Kenneth Clark observed, "if we object to his restraint...
, traditionally associated with severity and restraint, palatable to the Venetians with their love of surface decoration. This paved the way for the graceful architecture of Andrea Palladio
Andrea Palladio
Andrea Palladio was an architect active in the Republic of Venice. Palladio, influenced by Roman and Greek architecture, primarily by Vitruvius, is widely considered the most influential individual in the history of Western architecture...
.