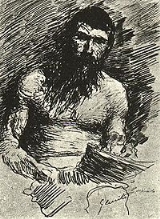 Encyclopedia
Vincenzo Gemito (July 16, 1852 - March 1, 1929) was an Italian
Italy
Italy , officially the Italian Republic languages]] under the European Charter for Regional or Minority Languages. In each of these, Italy's official name is as follows:;;;;;;;;), is a unitary parliamentary republic in South-Central Europe. To the north it borders France, Switzerland, Austria and...
sculptor and artist.

Although he worked in various studios of well known artists in his native Naples
Naples
Naples is a city in Southern Italy, situated on the country's west coast by the Gulf of Naples. Lying between two notable volcanic regions, Mount Vesuvius and the Phlegraean Fields, it is the capital of the region of Campania and of the province of Naples...
, Rome
Rome
Rome is the capital of Italy and the country's largest and most populated city and comune, with over 2.7 million residents in . The city is located in the central-western portion of the Italian Peninsula, on the Tiber River within the Lazio region of Italy.Rome's history spans two and a half...
and Paris
Paris
Paris is the capital and largest city in France, situated on the river Seine, in northern France, at the heart of the Île-de-France region...
, he is considered to have largely been self-taught, the reason he produced such distinctive works for that time, replacing sentiment with outstanding realism.

Gemito was born in Naples to a poor woodcutter's family. The day after his birth, his mother left him on the steps of the dell'Annunziata orphanage and he was taken in to live with the other foundlings. He was given the surname Genito, but this somehow became Gemito in orphanage records.

On July 30, 1852 he was adopted by a young family that had recently lost a child. The father was an artisan, and as a young child Gemito was probably encouraged to use his hands. He was working as an apprentice in painter and sculptor Emanuele Caggiano's studio before he was 10-years-old, demonstrating a dexterity and inventiveness which he eventually became famous for. He also worked in Stanislao Lista
Stanislao Lista
Stanislao Lista was an Italian sculptor active in Naples.He was teacher at the academy of fine arts in Naples where he was teacher of artists likeVincenzo Gemito, Francesco Jerace, Ettore Ximenes,Costantino Barbella,Antonio Mancini....
's studio. As a 12-year-old he was enrolled at the Naples Academy of Fine Art (where he became a lifelong friend of artist Antonio Mancini
Antonio Mancini
Antonio Mancini was an Italian painter.-Biography:Mancini was born in Rome and showed precocious ability as an artist...
), and also attended the Domenico Maggiore Academy for night classes.

He moulded the terracotta piece, The Player, (Il Giocatore), one of his most famous works, when only 16-years-old. It created excitement when exhibited at the Promotrice in Naples, so much so that King Victor Emmanuel II purchased it and presented it to the Museo di Capodimonte
Museo di Capodimonte
The National Museum of Capodimonte is located in the Palace of Capodimonte, a grand Bourbon palazzo in Naples, Italy. The museum is the prime repository of Neapolitan painting and decorative art, with several important works from other Italian schools of painting, and some important Ancient Roman...
for permanent display.

Gemito moved to Paris in 1877 where he found a great friend in noted French artist Jean-Louis-Ernest Meissonier
Jean-Louis-Ernest Meissonier
Jean-Louis Ernest Meissonier was a French Classicist painter and sculptor famous for his depictions of Napoleon, his armies and military themes. He documented sieges and manoeuvres and was the teacher of Édouard Detaille.-Biography:Ernest Meissonier was born at Lyon...
. As he was creating new works in various media in Paris, he also exhibited his works in noted salons and galleries, and at the Universal Exposition of 1878. It was at the Paris Salon
Paris Salon
The Salon , or rarely Paris Salon , beginning in 1725 was the official art exhibition of the Académie des Beaux-Arts in Paris, France. Between 1748–1890 it was the greatest annual or biannual art event in the Western world...
the previous year where he experienced a singular triumph, with the showing of his Neapolitan Fisherboy, which he had worked on for some years to perfect. The acclaim surrounding that work alone brought him widespread fame, and lucrative commissions for portraits. He remained in Paris three years before returning to Naples (1880) after his partner died. He went to Capri
Capri
Capri is an Italian island in the Tyrrhenian Sea off the Sorrentine Peninsula, on the south side of the Gulf of Naples, in the Campania region of Southern Italy...
for a short time, where he married Anna Cutolo.

In 1883 he once again demonstrated his determination to work outside the norm when he constructed his own foundry on the via Mergellina in Naples. He did so to revive the lost-wax process for bronze casting, which had been used during the Renaissance
Renaissance
The Renaissance was a cultural movement that spanned roughly the 14th to the 17th century, beginning in Italy in the Late Middle Ages and later spreading to the rest of Europe. The term is also used more loosely to refer to the historical era, but since the changes of the Renaissance were not...
.

In 1887, Gemito was commissioned to create a marble statue of the Holy Roman Emperor, Charles V
Charles V, Holy Roman Emperor
Charles V was ruler of the Holy Roman Empire from 1519 and, as Charles I, of the Spanish Empire from 1516 until his voluntary retirement and abdication in favor of his younger brother Ferdinand I and his son Philip II in 1556.As...
, to be erected outside the Royal Palace. Marble was the least liked medium for Gemito, and he fretted that this work was below his capabilities. He suffered a mental breakdown and withdrew to a one-room apartment, and spent periods in a mental hospital. For the next 21 years he worked on drawing but remained a recluse, and it wasn't until 1909 that he resumed sculpting to once again produce masterful works.

In his later years, Gemito turned to gold and silver smithing, and his intricate and delicate works are much admired today.

In 1952, a postage stamp was issued in Italy to celebrate the 100 years since Gemito's birth.