Encyclopedia
Badajoz is the capital of the Province of Badajoz in the autonomous community
Autonomous communities of Spain
An autonomous community In other languages of Spain:*Catalan/Valencian .*Galician .*Basque . The second article of the constitution recognizes the rights of "nationalities and regions" to self-government and declares the "indissoluble unity of the Spanish nation".Political power in Spain is...
of Extremadura
Extremadura
Extremadura is an autonomous community of western Spain whose capital city is Mérida. Its component provinces are Cáceres and Badajoz. It is bordered by Portugal to the west...
, Spain
Spain
Spain , officially the Kingdom of Spain languages]] under the European Charter for Regional or Minority Languages. In each of these, Spain's official name is as follows:;;;;;;), is a country and member state of the European Union located in southwestern Europe on the Iberian Peninsula...
, situated close to the Portuguese
Portugal
Portugal , officially the Portuguese Republic is a country situated in southwestern Europe on the Iberian Peninsula. Portugal is the westernmost country of Europe, and is bordered by the Atlantic Ocean to the West and South and by Spain to the North and East. The Atlantic archipelagos of the...
border, on the left bank of the river Guadiana
Guadiana
The Guadiana , or Odiana, is an international river located on the Portuguese–Spanish border, separating Extremadura and Andalucia from Alentejo and Algarve...
, and the Madrid
Madrid
Madrid is the capital and largest city of Spain. The population of the city is roughly 3.3 million and the entire population of the Madrid metropolitan area is calculated to be 6.271 million. It is the third largest city in the European Union, after London and Berlin, and its metropolitan...
–Lisbon
Lisbon
Lisbon is the capital city and largest city of Portugal with a population of 545,245 within its administrative limits on a land area of . The urban area of Lisbon extends beyond the administrative city limits with a population of 3 million on an area of , making it the 9th most populous urban...
railway. The population in 2007 was 145,257.

Badajoz is the see of a bishopric
Diocese
A diocese is the district or see under the supervision of a bishop. It is divided into parishes.An archdiocese is more significant than a diocese. An archdiocese is presided over by an archbishop whose see may have or had importance due to size or historical significance...
. It occupies a slight eminence, crowned by the ruins of a Moorish castle, and overlooking the Guadiana. A strong wall and bastions, with a broad moat and outworks, and forts on the surrounding heights, give the city an appearance of great strength. The river, which flows between the castle-hill and the powerfully armed fort of San Cristobal, is crossed by a magnificent granite bridge, originally built in 1460, repaired in 1597 and rebuilt in 1833. The whole aspect of Badajoz recalls its stormy history; even the cathedral, built in 1238, resembles a fortress, with massive walls.

Owing to its position, the city enjoys a considerable transit trade with Portugal; its other industries include the manufacture of linen, woollen and leather goods, and of pottery.

It is not mentioned by any Roman historian, although Roman villas have been discovered in the area, as well as of constructions from the Visigothic age. It was founded (or founded again, if the theories it was already existing and was even the seat of a Christian bishopric) by the Muslim nobleman Ibn Marwan
Ibn Marwan
Ibn Marwân , was a Muladi Sufi whose family had come from northern Portugal and settled near Mérida....
around 875, after he had been expelled from Mèrida
Merida
Places of the world named Mérida or Merida include:*Mérida, Spain, capital city of the Spanish Community of Extremadura*Mérida, Yucatán, capital city of the Mexican state of Yucatán*Merida, Leyte, a municipality in Leyte province in the Philippines...
. Under Ibn Marwan the city was the seat of an effectively autonomous rebel state which was quenched only in the 10th century. After 1022 it became the capital of a small Muslim kingdom, the Taifa of Badajoz
Taifa of Badajoz
The Taifa of Badajoz was a medieval Muslim kingdom in what is now parts of Portugal and Spain and centred on the city of Badajoz which exists today as the first city of Extremadura, in Spain....
; at the time Badajoz has some 25,000 inhabitants. It was captured by Alfonso IX of León
Alfonso IX of Leon
Alfonso IX was king of León and Galicia from the death of his father Ferdinand II in 1188 until his own death...
in 1230. It was known as Batlabus and Batalyos during Muslim rule.

As a frontier fortress it underwent many sieges. It was beleaguered by the Portuguese in 1660, and in 1705 by the Allies in the War of the Spanish Succession
War of the Spanish Succession
The War of the Spanish Succession was fought among several European powers, including a divided Spain, over the possible unification of the Kingdoms of Spain and France under one Bourbon monarch. As France and Spain were among the most powerful states of Europe, such a unification would have...
. During the Peninsular War
Peninsular War
The Peninsular War was a war between France and the allied powers of Spain, the United Kingdom, and Portugal for control of the Iberian Peninsula during the Napoleonic Wars. The war began when French and Spanish armies crossed Spain and invaded Portugal in 1807. Then, in 1808, France turned on its...
Badajoz was unsuccessfully attacked by the French in 1808 and 1809; but on March 10, 1811, the Spanish commander, José Imaz, was bribed into surrendering to a French force under Marshal Soult. A British and Portuguese army, commanded by Marshal Beresford
William Beresford, 1st Viscount Beresford
General William Carr Beresford, 1st Viscount Beresford, 1st Marquis of Campo Maior, GCB, GCH, GCTE, PC , was a British soldier and politician...
, endeavoured to retake it, and on May 16, 1811 defeated a relieving force at Albuera
Battle of Albuera
The Battle of Albuera was an indecisive battle during the Peninsular War. A mixed British, Spanish and Portuguese corps engaged elements of the French Armée du Midi at the small Spanish village of Albuera, about 20 kilometres south of the frontier fortress-town of Badajoz, Spain.From...
, but the siege was abandoned in June. 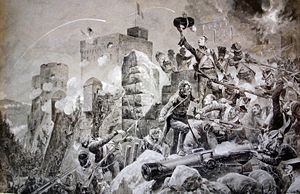 The attacks were pressed with great gallantry for five hours, but repeatedly beaten back with heavy loss. Meanwhile the castle, and another section of undamaged wall, had been attacked by escalade and successfully taken by the British. At the cost of some 5,000 British Army casualties, Wellington had succeeded in taking Badajoz. He wrote to Lord Liverpool,
"The capture of Badajos affords as strong an instance of the gallantry of our troops as has ever been displayed, but I anxiously hope that I shall never again be the instrument of putting them to such a test as that to which they were put last night"
(However, the storming of San Sebastián
San Sebastián
Donostia-San Sebastián is a city and municipality located in the north of Spain, in the coast of the Bay of Biscay and 20 km away from the French border. The city is the capital of Gipuzkoa, in the autonomous community of the Basque Country. The municipality’s population is 186,122 , and its...
in 1813 was much like Badajoz)
In the Siege
Siege
A siege is a military blockade of a city or fortress with the intent of conquering by attrition or assault. The term derives from sedere, Latin for "to sit". Generally speaking, siege warfare is a form of constant, low intensity conflict characterized by one party holding a strong, static...
of Badajoz, a detachment of the 45th Regiment of Foot
45th (Nottinghamshire) Regiment of Foot
The 45th Regiment of Foot was a British Army line infantry regiment. During the Childers Reforms it was united with the 95th Regiment of Foot to form the The Sherwood Foresters ....
(later amalgamated with the 95th
95th (Derbyshire) Regiment of Foot
The 95th Regiment of Foot was formed when the 95th Rifles were redesignated as The Rifle Brigade . In 1881, during the Childers Reforms, it was united with the 45th Regiment of Foot to form the Sherwood Foresters .-History:...
to form Sherwood Foresters
Sherwood Foresters
The Sherwood Foresters was formed during the Childers Reforms in 1881 from the amalgamation of the 45th Regiment of Foot and the 95th Regiment of Foot...
Regiment) succeeded in getting into the castle first and the red coatee of Lt. James MacPherson of the 45th was hoisted in place of the French flag to indicate the fall of the castle
Castle
A castle is a type of fortified structure built in Europe and the Middle East during the Middle Ages by European nobility. Scholars debate the scope of the word castle, but usually consider it to be the private fortified residence of a lord or noble...
. This feat is commemorated on April 6 each year when red jackets are flown on Regimental flag staffs and at Nottingham Castle
Nottingham Castle
Nottingham Castle is a castle in Nottingham, England. It is located in a commanding position on a natural promontory known as "'Castle Rock'", with cliffs high to the south and west. In the Middle Ages it was a major royal fortress and occasional royal residence...
.

With the town taken, military discipline largely disappeared, and the town was subjected to two days of pillage, murder, rape and drunkenness by the British survivors. The only way to restore order was to erect the gallows, which however were evidently not used, and flog many soldiers.

(Sir Harry Smith
Harry Smith (army)
Lieutenant General Sir Henry George Wakelyn Smith, 1st Baronet of Aliwal GCB , known as Sir Harry Smith, was a notable English soldier and military commander in the British Army of the early 19th century...
undertook to protect two young ladies from any insult during the sack of Badajos, one of whom he married. In consequence Ladysmith is named after a former inhabitant of Badajoz, Juana Maria Smith)

A military and republican rising took place here in August 1883, but failed.

The climate of Badajoz has drastic changes between the summer and winter as seen in the chart below.

Badajoz is the birthplace of the statesman Manuel de Godoy
Manuel de Godoy
Don Manuel Francisco Domingo de Godoy y Álvarez de Faria, de los Ríos y Sánchez-Zarzosa, also Manuel de Godoy y Álvarez de Faria de los Ríos Sánchez Zarzosa , was Prime Minister of Spain from 1792 to 1797 and from 1801 to 1808...
, the Duke of Alcudia (1767–1851), and of the painter Luis de Morales
Luis de Morales
Luis de Morales was a Spanish painter born in Badajoz, Extremadura. Known as "El Divino", most of his work was of religious subjects, including many representations of the Madonna and Child and the Passion....
. Five pictures by Morales are preserved in the cathedral. The conqueror Pedro de Alvarado
Pedro de Alvarado
Pedro de Alvarado y Contreras was a Spanish conquistador and governor of Guatemala. He participated in the conquest of Cuba, in Juan de Grijalva's exploration of the coasts of Yucatan and the Gulf of Mexico, and in the conquest of Mexico led by Hernan Cortes...
(c. 1495–1541) was also born in Badajoz. Cristóbal Oudrid (1825–1877), one of the founding fathers of Spanish musical nationalism, was born here, son of the resident military bandmaster.

Alburquerque is a small village in the province of Badajoz. Its name was given (with a minor spelling change) by the Spanish conquerors to the city now known as Albuquerque, New Mexico
Albuquerque, New Mexico
Albuquerque is the largest city in the state of New Mexico, United States. It is the county seat of Bernalillo County and is situated in the central part of the state, straddling the Rio Grande. The city population was 545,852 as of the 2010 Census and ranks as the 32nd-largest city in the U.S. As...
in the United States
United States
The United States of America is a federal constitutional republic comprising fifty states and a federal district...
.