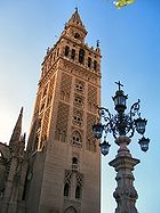 Encyclopedia
The Giralda is a former minaret
Minaret
A minaret مناره , sometimes مئذنه) is a distinctive architectural feature of Islamic mosques, generally a tall spire with an onion-shaped or conical crown, usually either free standing or taller than any associated support structure. The basic form of a minaret includes a base, shaft, and gallery....
that was converted to a bell tower
Bell tower
A bell tower is a tower which contains one or more bells, or which is designed to hold bells, even if it has none. In the European tradition, such a tower most commonly serves as part of a church and contains church bells. When attached to a city hall or other civic building, especially in...
for the Cathedral of Seville in Seville
Seville
Seville is the artistic, historic, cultural, and financial capital of southern Spain. It is the capital of the autonomous community of Andalusia and of the province of Seville. It is situated on the plain of the River Guadalquivir, with an average elevation of above sea level...
. The tower is 104.5 m (343 ft) in height and it was one of the most important symbols in the medieval city.

The tower was begun under the architect Ahmad Ben Baso in 1184. After Ben Baso's death, other architects continued work on the tower. An architect named Jabir (or Geber) is also often credited with the tower's design. The tower was completed March 10, 1198 with the installation of copper spheres on the tower's top. Architects designed similar towers in what are now Spain and Morocco
Morocco
Morocco , officially the Kingdom of Morocco , is a country located in North Africa. It has a population of more than 32 million and an area of 710,850 km², and also primarily administers the disputed region of the Western Sahara...
during this period. The tower of the Koutoubia Mosque in Marrakesh served as a model for the Giralda and its sister, the Hassan Tower
Hassan Tower
Hassan Tower or Tour Hassan is the minaret of an incomplete mosque in Rabat, Morocco. Begun in 1195, the tower was intended to be the largest minaret in the world along with the mosque, also intended to be the world's largest. In 1199, Sultan Yacoub al-Mansour died and construction on the mosque...
in Rabat
Rabat
Rabat , is the capital and third largest city of the Kingdom of Morocco with a population of approximately 650,000...
.

The tower's first two-thirds is a former minaret from the Berber
Berber people
Berbers are the indigenous peoples of North Africa west of the Nile Valley. They are continuously distributed from the Atlantic to the Siwa oasis, in Egypt, and from the Mediterranean to the Niger River. Historically they spoke the Berber language or varieties of it, which together form a branch...
Almohad
Almohad
The Almohad Dynasty , was a Moroccan Berber-Muslim dynasty founded in the 12th century that established a Berber state in Tinmel in the Atlas Mountains in roughly 1120.The movement was started by Ibn Tumart in the Masmuda tribe, followed by Abd al-Mu'min al-Gumi between 1130 and his...
period of Seville, the upper third Spanish Renaissance
Spanish Renaissance
The Spanish Renaissance refers to a movement in Spain, emerging from the Italian Renaissance in Italy during the 14th century, that spread to Spain during the 15th and 16th centuries...
architecture. After Seville was taken by the Christians (1248) in the Reconquista
Reconquista
The Reconquista was a period of almost 800 years in the Middle Ages during which several Christian kingdoms succeeded in retaking the Muslim-controlled areas of the Iberian Peninsula broadly known as Al-Andalus...
, the city's mosque was converted to a church. This structure was badly damaged in a 1356 earthquake, and by 1401 the city began building the current cathedral, one of the largest churches in the world and an outstanding example of the Gothic
Gothic architecture
Gothic architecture is a style of architecture that flourished during the high and late medieval period. It evolved from Romanesque architecture and was succeeded by Renaissance architecture....
and Baroque
Baroque
The Baroque is a period and the style that used exaggerated motion and clear, easily interpreted detail to produce drama, tension, exuberance, and grandeur in sculpture, painting, literature, dance, and music...
architectural styles. The tower survived the earthquake, but the copper spheres that originally topped the tower fell during a 1365 earthquake, and the spheres were replaced with a cross and bell. The new cathedral incorporated the tower as a bell tower and eventually built it higher during the Renaissance
Renaissance
The Renaissance was a cultural movement that spanned roughly the 14th to the 17th century, beginning in Italy in the Late Middle Ages and later spreading to the rest of Europe. The term is also used more loosely to refer to the historical era, but since the changes of the Renaissance were not...
under architect Hernán Ruiz, who was commissioned to work on the tower in 1568. This newer section of the tower contains a large inscription of Seville's motto, NO8DO, meaning "[Seville] has not abandoned me." Alfonso X of Castile
Alfonso X of Castile
Alfonso X was a Castilian monarch who ruled as the King of Castile, León and Galicia from 1252 until his death...
gave the motto to the city when it continued to support his rule during an insurrection. Covering the top of the tower is the "Lily section" which surrounds the enclosure with the bell. The statue stands 4 m (13 feet) in height – 7 m (23 ft) with the pedestal – and sat on top of the tower from its installation in 1568 until 1997, when it was replaced with a copy.

These towers, most notably those in Lebrija
Lebrija
Lebrija is a city in the province of Seville, Andalusia , near the left bank of the Guadalquivir river, and on the eastern edge of the marshes known as Las Marismas....
and Carmona
Carmona, Spain
Carmona is a town of south-western Spain, in the province of Seville; 33 km north-east of Seville.Carmona is built on a ridge overlooking the central plain of Andalusia, to the north is the Sierra Morena, to the south is the of peak of San Cristobal. The city is known for its thriving trade...
, are popularly known as Giraldillas.
Many towers have borrowed from the Giralda's design throughout history. Several church towers in the province of Seville
Seville (province)
Seville is a province of southern Spain, in the western part of the autonomous community of Andalusia. It is bordered by the provinces of Málaga, Cádiz, Huelva, Badajoz, and Córdoba.Its area is 14,042 km²...
also bear a resemblance to the tower, and may have been inspired by the Giralda. Numerous replicas of the Giralda have been built in the United States: one, now destroyed, in the second Madison Square Garden
Madison Square Garden (1890)
Madison Square Garden was an indoor arena in New York City, the second by that name, and the second to be located at 26th Street and Madison Avenue in Manhattan...
in New York City
New York City
New York is the most populous city in the United States and the center of the New York Metropolitan Area, one of the most populous metropolitan areas in the world. New York exerts a significant impact upon global commerce, finance, media, art, fashion, research, technology, education, and...
, designed by Stanford White
Stanford White
Stanford White was an American architect and partner in the architectural firm of McKim, Mead & White, the frontrunner among Beaux-Arts firms. He designed a long series of houses for the rich and the very rich, and various public, institutional, and religious buildings, some of which can be found...
, and another in Kansas City
Country Club Plaza
The Country Club Plaza is an upscale shopping district and residential neighborhood in Kansas City, Missouri, USA. It was the first shopping center in the world designed to accommodate shoppers arriving by automobile...
. The clock tower of the Ferry Building
Ferry Building
The San Francisco Ferry Building is a terminal for ferries that travel across the San Francisco Bay and a shopping center located on The Embarcadero in San Francisco, California. On top of the building is a large clock tower, which can be seen from Market Street, a main thoroughfare of the city...
in San Francisco is also based on the Giralda. The clock tower at the University of Puerto Rico
University of Puerto Rico
The University of Puerto Rico is the state university system of Puerto Rico. The system consists of 11 campuses and has approximately 64,511 students and 5,300 faculty members...
's Río Piedras campus was also inspired by the Giralda, as was the clock tower of the Railroad Depot
Chicago, Milwaukee, St. Paul and Pacific Depot Freight House and Train Shed
The Chicago, Milwaukee, St. Paul and Pacific Depot Freight House and Train Shed , now officially named The Depot, is a historic railroad depot in downtown Minneapolis, Minnesota. The Chicago, Milwaukee, St...
in Minneapolis, destroyed by wind in 1941. The Biltmore Hotel
Biltmore Hotel
Bowman-Biltmore Hotels was a chain created by hotel magnate John McEntee Bowman.The name evokes the Vanderbilt family's Biltmore Estate, whose buildings and gardens within are privately owned historical landmarks and tourist attractions in Asheville, North Carolina, United States. The name has...
in Miami, Florida, in the Coral Gables suburb, built in 1926, is a close replica of the Giralda. The Wrigley Building
Wrigley Building
The Wrigley Building is a skyscraper located directly across Michigan Avenue from the Tribune Tower on the Magnificent Mile...
in Chicago
Chicago
Chicago is the largest city in the US state of Illinois. With nearly 2.7 million residents, it is the most populous city in the Midwestern United States and the third most populous in the US, after New York City and Los Angeles...
is based on the tower as well.

In popular literature, the Giralda plays a significant role in the 1998 Dan Brown
Dan Brown
Dan Brown is an American author of thriller fiction, best known for the 2003 bestselling novel, The Da Vinci Code. Brown's novels, which are treasure hunts set in a 24-hour time period, feature the recurring themes of cryptography, keys, symbols, codes, and conspiracy theories...
novel Digital Fortress
Digital Fortress
Digital Fortress is a techno-thriller novel written by American author Dan Brown and published in 1998 by St. Martin's Press. The book explores the theme of government surveillance of electronically stored information on the private lives of citizens, and the possible civil liberties and ethical...
.