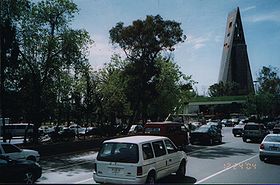 Avenida de los Insurgentes (Insurgents' Avenue), sometimes known simply as Insurgentes, is the longest avenue
Street name
A street name or odonym is an identifying name given to a street. The street name usually forms part of the address...
in Mexico City
Mexico City
Mexico City is the Federal District , capital of Mexico and seat of the federal powers of the Mexican Union. It is a federal entity within Mexico which is not part of any one of the 31 Mexican states but belongs to the federation as a whole...
and said to be the longest in the world with a length of 28.8 km (17.9 mi) on a north-south axis across the city. Insurgentes has its origins in what was during the early 20th century known as the Via del Centenario which ran from city centre to the southern suburbs.

Many decades later, after it was paved
Pavement (material)
Road surface or pavement is the durable surface material laid down on an area intended to sustain vehicular or foot traffic, such as a road or walkway. In the past cobblestones and granite setts were extensively used, but these surfaces have mostly been replaced by asphalt or concrete. Such...
and widened, its name was changed to Avenida de los Insurgentes, apparently happening during the administration of President
President of Mexico
The President of the United Mexican States is the head of state and government of Mexico. Under the Constitution, the president is also the Supreme Commander of the Mexican armed forces...
Miguel Alemán
Miguel Alemán Valdés
Miguel Alemán Valdés served as the President of Mexico from 1946 to 1952.-Life:Alemán was born in Sayula in the state of Veracruz as the son of General Miguel Alemán González and Tomasa Valdés Ledezma...
, when the area attracted wealthy urbanites for sophisticated, modern housing.
The avenue was named after the Insurgent Army (Ejército de los Insurgentes) that fought for Mexican independence from Spain
Spain
Spain , officially the Kingdom of Spain languages]] under the European Charter for Regional or Minority Languages. In each of these, Spain's official name is as follows:;;;;;;), is a country and member state of the European Union located in southwestern Europe on the Iberian Peninsula...
during the Mexican War of Independence
Mexican War of Independence
The Mexican War of Independence was an armed conflict between the people of Mexico and the Spanish colonial authorities which started on 16 September 1810. The movement, which became known as the Mexican War of Independence, was led by Mexican-born Spaniards, Mestizos and Amerindians who sought...
from 1810 to 1821.

The avenue's southern terminus is located near Volcán Ajusco in the intersection with the Viaducto Tlalpan avenue, where it becomes Highway 95
Mexican Federal Highway 95
Mexican Federal Highway 95 connects Mexico City to Acapulco, Guerrero.The highway is the main road that leads to the Lagunas de Zempoala National Park...
in direction to Cuernavaca
Cuernavaca
Cuernavaca is the capital and largest city of the state of Morelos in Mexico. It was established at the archeological site of Gualupita I by the Olmec, "the mother culture" of Mesoamerica, approximately 3200 years ago...
. The northern terminus is located in the intersection with Avenida Acueducto where it becomes the highway to Pachuca
Pachuca
Pachuca, formally Pachuca de Soto is the capital of the Mexican state of Hidalgo. It is located in the south-central part of the state. Pachuca de Soto is also the name of the municipality of which the city serves as municipal seat...
.

It was the ancient village of the Cuicuilcas who used to live in what is today southern part of the city, just 1 km away from the campus. Xitle Volcano destroyed the city circa 1100BC. It remains the Imán pyramid
Pyramid
A pyramid is a structure whose outer surfaces are triangular and converge at a single point. The base of a pyramid can be trilateral, quadrilateral, or any polygon shape, meaning that a pyramid has at least three triangular surfaces...
.

There are several shopping malls located along the avenue, including Perisur
Perisur
Perisur is a shopping mall located in the Coyoacán borough in southern Mexico City at the intersection of Insurgentes Avenue South and the Anillo Periférico, next to the UNAM main campus in Ciudad Universitaria and to the upscale Jardines del Pedregal neighbourhood...
, Galerias Insurgentes
Colonia del Valle
Colonia del Valle is a neighborhood in the Benito Juarez borough of Mexico City. The city includes "...a great number of parks, vast and tree-lined streets, prestigious shopping malls, and some city landmarks..."...
and Centro Insurgentes.

Throughout its span, Insurgentes crosses several ejes viales as well as the Circuito Interior and Anillo Periférico
Anillo Periférico
The Anillo Periférico is the name given to the outer beltway of Mexico City. The beltway gained major media attention when the Mexico City mayor, Andrés Manuel López Obrador, started a project to turn a southern section of the ring into a two-story highway...
highway rings twice.