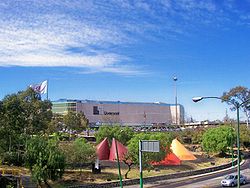 Perisur is a shopping mall
Shopping mall
A shopping mall, shopping centre, shopping arcade, shopping precinct or simply mall is one or more buildings forming a complex of shops representing merchandisers, with interconnecting walkways enabling visitors to easily walk from unit to unit, along with a parking area — a modern, indoor version...
located in the Coyoacán
Coyoacán
Coyoacán refers to one of the sixteen boroughs of the Federal District of Mexico City as well as the former village which is now the borough’s “historic center.” The name comes from Nahuatl and most likely means “place of coyotes,” when the Aztecs named a pre-Hispanic village on the southern shore...
borough in southern Mexico City
Mexico City
Mexico City is the Federal District , capital of Mexico and seat of the federal powers of the Mexican Union. It is a federal entity within Mexico which is not part of any one of the 31 Mexican states but belongs to the federation as a whole...
at the intersection of Insurgentes Avenue South and the Anillo Periférico
Anillo Periférico
The Anillo Periférico is the name given to the outer beltway of Mexico City. The beltway gained major media attention when the Mexico City mayor, Andrés Manuel López Obrador, started a project to turn a southern section of the ring into a two-story highway...
, next to the UNAM
Unam
UNAM or UNaM may refer to:* National University of Misiones, a National University in Posadas, Argentina*National Autonomous University of Mexico , the large public autonomous university based in Mexico City...
main campus in Ciudad Universitaria
Ciudad Universitaria
Ciudad Universitaria , Mexico, is UNAM's main campus, located in Coyoacán borough in the southern part of Mexico City. Designed by architects Mario Pani and Enrique del Moral, it encloses the Olympic Stadium, about 40 faculties and institutes, the Cultural Center, an ecological reserve, the Central...
and to the upscale Jardines del Pedregal
Jardines del Pedregal
Jardines del Pedregal or simply El Pedregal is an upscale residential colonia in southern Mexico City. Its borders are San Jerónimo Avenue and Ciudad Universitaria at the north, Insurgentes Avenue at the east and Periférico at south and west. Its were the major real estate project undertaken by...
neighbourhood. It takes its name from being on the south side of Periférico (Perisur being short for Periférico Sur).

The shopping centre became the first and largest shopping mall in total area in Mexico when it opened in 1980.