Encyclopedia
Decimius Magnus Ausonius (ca. 310–395) was a Latin
Latin literature
Latin literature includes the essays, histories, poems, plays, and other writings of the ancient Romans. In many ways, it seems to be a continuation of Greek literature, using many of the same forms...
poet
Poet
A poet is a person who writes poetry. A poet's work can be literal, meaning that his work is derived from a specific event, or metaphorical, meaning that his work can take on many meanings and forms. Poets have existed since antiquity, in nearly all languages, and have produced works that vary...
and rhetoric
Rhetoric
Rhetoric is the art of discourse, an art that aims to improve the facility of speakers or writers who attempt to inform, persuade, or motivate particular audiences in specific situations. As a subject of formal study and a productive civic practice, rhetoric has played a central role in the Western...
ian, born at Burdigala (Bordeaux
Bordeaux
Bordeaux is a port city on the Garonne River in the Gironde department in southwestern France.The Bordeaux-Arcachon-Libourne metropolitan area, has a population of 1,010,000 and constitutes the sixth-largest urban area in France. It is the capital of the Aquitaine region, as well as the prefecture...
).

Decimius Magnus Ausonius was born in Bordeaux
Bordeaux
Bordeaux is a port city on the Garonne River in the Gironde department in southwestern France.The Bordeaux-Arcachon-Libourne metropolitan area, has a population of 1,010,000 and constitutes the sixth-largest urban area in France. It is the capital of the Aquitaine region, as well as the prefecture...
in ca. 310. His father was a noted physician of Greek
Greeks
The Greeks, also known as the Hellenes , are a nation and ethnic group native to Greece, Cyprus and neighboring regions. They also form a significant diaspora, with Greek communities established around the world....
ancestry and his mother was descended on both sides from long-established aristocratic
Aristocracy (class)
The aristocracy are people considered to be in the highest social class in a society which has or once had a political system of Aristocracy. Aristocrats possess hereditary titles granted by a monarch, which once granted them feudal or legal privileges, or deriving, as in Ancient Greece and India,...
Gallo-Roman families of southwestern Gaul
Gaul
Gaul was a region of Western Europe during the Iron Age and Roman era, encompassing present day France, Luxembourg and Belgium, most of Switzerland, the western part of Northern Italy, as well as the parts of the Netherlands and Germany on the left bank of the Rhine. The Gauls were the speakers of...
. Ausonius was given a strict upbringing by his aunt and grandmother, both named Aemilia. He received an excellent education, especially in grammar and rhetoric, but professed that his progress in Greek was unsatisfactory. Having completed his studies, he trained for some time as an advocate, but he preferred teaching. In 334, he established a school of rhetoric in Bordeaux, which was very popular. His most famous pupil was St. Paulinus of Nola, who later became Bishop of Nola
Bishop of Nola
The Diocese of Nola is a Roman Catholic diocese in Italy, with its seat in the ancient city Nola. The diocese is a suffragan diocese of the Archdiocese of Naples....
.

After the murder of Gratian in 383, Ausonius retired to his estates near Burdigala (now Bordeaux) in Gaul. These supposedly included the land now owned by Château Ausone
Château Ausone
Château Ausone is a Bordeaux wine from Saint-Émilion appellation, one of only two wines, along with Château Cheval Blanc, to be ranked Premier Grand Cru Classé in the Classification of Saint-Émilion wine...
, which takes its name from him. He appears to have been a late and perhaps not very enthusiastic convert to Christianity
Christianity
Christianity is a monotheistic religion based on the life and teachings of Jesus as presented in canonical gospels and other New Testament writings...
. He died about 395.

Although much admired by his contemporaries, the writings of Ausonius have not since been ranked among Latin literature
Latin literature
Latin literature includes the essays, histories, poems, plays, and other writings of the ancient Romans. In many ways, it seems to be a continuation of Greek literature, using many of the same forms...
's finest. His style is easy and fluent, and his Mosella is still widely appreciated for its description of life and scenery along the River Moselle. Overall, however, he is generally considered derivative and unoriginal. Edward Gibbon
Edward Gibbon
Edward Gibbon was an English historian and Member of Parliament...
observed in the third volume of his Decline and Fall of the Roman Empire that "the poetical fame of Ausonius condemns the taste of his age." However, he is frequently cited by historians of wine
Wine
Wine is an alcoholic beverage, made of fermented fruit juice, usually from grapes. The natural chemical balance of grapes lets them ferment without the addition of sugars, acids, enzymes, or other nutrients. Grape wine is produced by fermenting crushed grapes using various types of yeast. Yeast...
making, as his works give early evidence of large-scale viniculture in the now-famous wine country around his native Bordeaux
Bordeaux
Bordeaux is a port city on the Garonne River in the Gironde department in southwestern France.The Bordeaux-Arcachon-Libourne metropolitan area, has a population of 1,010,000 and constitutes the sixth-largest urban area in France. It is the capital of the Aquitaine region, as well as the prefecture...
.

An interesting little work of his is the Cento Nuptialis, translated as A Nuptial Cento by H.G. Evelyn-White for Loeb Classical Library
Loeb Classical Library
The Loeb Classical Library is a series of books, today published by Harvard University Press, which presents important works of ancient Greek and Latin Literature in a way designed to make the text accessible to the broadest possible audience, by presenting the original Greek or Latin text on each...
. Composed entirely of quotations from Virgil
Virgil
Publius Vergilius Maro, usually called Virgil or Vergil in English , was an ancient Roman poet of the Augustan period. He is known for three major works of Latin literature, the Eclogues , the Georgics, and the epic Aeneid...
, the poem celebrates a wedding culminating in a defloration of great virtuosity and obscenity:

Back and forth he plies his path and, the cavity reverberating,
thrusts between the bones, and strikes with ivory quill.
And now, their journey covered, wearily they neared
their very goal: then rapid breathing shakes his limbs
and parched mouth, his sweat in rivers flows;
down he slumps bloodless; the fluid drips from his groin.

His writings are also remarkable for mentioning, in passing, the working of a water mill sawing marble on a tributary of the Moselle
Moselle
Moselle is a department in the east of France named after the river Moselle.- History :Moselle is one of the original 83 departments created during the French Revolution on March 4, 1790...
: 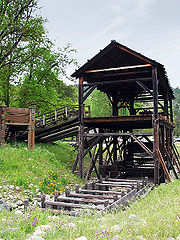 The excerpt sheds new light on the development of Roman technology
Roman technology
Roman technology is the engineering practice which supported Roman civilization and made the expansion of Roman commerce and Roman military possible over nearly a thousand years....
in using water power for different applications. It is one of the rare references in Roman literature of water mills used to cut stone, but is a logical consequence of the application of water power to mechanical sawing of stone (and presumably wood also). Earlier references to the widespread use of mills occur in Vitruvius
Vitruvius
Marcus Vitruvius Pollio was a Roman writer, architect and engineer, active in the 1st century BC. He is best known as the author of the multi-volume work De Architectura ....
in his De Architectura
De architectura
' is a treatise on architecture written by the Roman architect Vitruvius and dedicated to his patron, the emperor Caesar Augustus, as a guide for building projects...
of circa 25 BC, and the Naturalis Historia
Naturalis Historia
The Natural History is an encyclopedia published circa AD 77–79 by Pliny the Elder. It is one of the largest single works to have survived from the Roman Empire to the modern day and purports to cover the entire field of ancient knowledge, based on the best authorities available to Pliny...
of Pliny the Elder
Pliny the Elder
Gaius Plinius Secundus , better known as Pliny the Elder, was a Roman author, naturalist, and natural philosopher, as well as naval and army commander of the early Roman Empire, and personal friend of the emperor Vespasian...
published in 77 AD. Such applications of mills were to multiply again after the fall of the Empire through the Dark Ages into the modern era. The mills at Barbegal in southern France
France
The French Republic , The French Republic , The French Republic , (commonly known as France , is a unitary semi-presidential republic in Western Europe with several overseas territories and islands located on other continents and in the Indian, Pacific, and Atlantic oceans. Metropolitan France...
are famous for their application of water power to grinding grain to make flour and were built in the 1st century AD. They consisted of 16 mills in a parallel sequence on a hill near Arles
Arles
Arles is a city and commune in the south of France, in the Bouches-du-Rhône department, of which it is a subprefecture, in the former province of Provence....
.

The construction of a saw mill is even simpler than a flour or grinding mill, since no gearing is needed, and the rotary saw blade can be driven direct from the water wheel axle, as the example of Sutter's Mill
Sutter's Mill
Sutter's Mill was a sawmill owned by 19th century pioneer John Sutter in partnership with James W. Marshall. It was located in Coloma, California, at the bank of the South Fork American River...
in California shows. However, a different mechanism is shown by the sawmill at Hieropolis involving a frame saw operated through a crank and connecting rod.