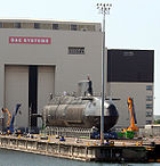 Encyclopedia
The Astute-class is the latest class of nuclear-powered
Nuclear marine propulsion
Nuclear marine propulsion is propulsion of a ship by a nuclear reactor. Naval nuclear propulsion is propulsion that specifically refers to naval warships...
fleet submarine
Submarine
A submarine is a watercraft capable of independent operation below the surface of the water. It differs from a submersible, which has more limited underwater capability...
s (SSN
Hull classification symbol
The United States Navy, United States Coast Guard, and United States National Oceanic and Atmospheric Administration use hull classification symbols to identify their ship types and each individual ship within each type...
) in service with the Royal Navy
Royal Navy
The Royal Navy is the naval warfare service branch of the British Armed Forces. Founded in the 16th century, it is the oldest service branch and is known as the Senior Service...
. The class sets a new standard for the Royal Navy in terms of weapons load, communication facilities and stealth. The boats are being constructed by BAE Systems Submarine Solutions at Barrow-in-Furness
Barrow-in-Furness
Barrow-in-Furness is an industrial town and seaport which forms about half the territory of the wider Borough of Barrow-in-Furness in the county of Cumbria, England. It lies north of Liverpool, northwest of Manchester and southwest from the county town of Carlisle...
.

Seven boats will be constructed. The first of class, Astute
HMS Astute (S119)
HMS Astute is a nuclear-powered submarine in the Royal Navy, the lead ship of her class. Builders BAE Systems describe her as "the largest and most able attack submarine that the Royal Navy has operated, with a performance to rival any in the world"....
, was launched in 2007 and commissioned in 2010, and the second, Ambush
HMS Ambush (S120)
HMS Ambush is an Astute-class nuclear fleet submarine of the Royal Navy, the second boat of her class, and is currently fitting out. Ambush was ordered from GEC's Marconi Marine on 17 March 1997...
, was launched on 6 January 2011, and successfully completed its initial dive test on 30 September 2011.

The Royal Navy
Royal Navy
The Royal Navy is the naval warfare service branch of the British Armed Forces. Founded in the 16th century, it is the oldest service branch and is known as the Senior Service...
has changed its submarine-employment strategy from the Cold War
Cold War
The Cold War was the continuing state from roughly 1946 to 1991 of political conflict, military tension, proxy wars, and economic competition between the Communist World—primarily the Soviet Union and its satellite states and allies—and the powers of the Western world, primarily the United States...
emphasis on anti-submarine warfare to the concept of "Maritime Contributions to Joint Operations."

Approval for studies to define the "Batch 2 Trafalgar class" (what would become the Astute class) was given in June 1991. In July 1994 risk reduction studies were authorised in parallel with the formal bid phase of the project.

On 17 March 1997, the Ministry of Defence
Ministry of Defence (United Kingdom)
The Ministry of Defence is the United Kingdom government department responsible for implementation of government defence policy and is the headquarters of the British Armed Forces....
announced that it would place a £2 billion order for three submarines and that they would be called the Astute class. On 26 March 1997 the contract was signed with GEC-Marconi for the first three boats: Astute
HMS Astute (S119)
HMS Astute is a nuclear-powered submarine in the Royal Navy, the lead ship of her class. Builders BAE Systems describe her as "the largest and most able attack submarine that the Royal Navy has operated, with a performance to rival any in the world"....
, Ambush
HMS Ambush (S120)
HMS Ambush is an Astute-class nuclear fleet submarine of the Royal Navy, the second boat of her class, and is currently fitting out. Ambush was ordered from GEC's Marconi Marine on 17 March 1997...
and Artful
HMS Artful (S121)
HMS Artful is the third Astute-class nuclear-powered fleet submarine of the Royal Navy. Artful was ordered from GEC's Marconi Marine on 17 March 1997, and is under construction at Barrow in Furness....
. These names were last given to Amphion-class
Amphion class submarine
|-See also:- External links :**...
submarines that entered service towards the end of World War II
World War II
World War II, or the Second World War , was a global conflict lasting from 1939 to 1945, involving most of the world's nations—including all of the great powers—eventually forming two opposing military alliances: the Allies and the Axis...
. GEC would build the submarines at its VSEL
Vickers Shipbuilding and Engineering Ltd
In 1994 VSEL was subject to two takeover proposals, one from GEC and another from British Aerospace . VSEL was willing to participate in a merger with a larger company to reduce its exposure to cycles in warship production, particularly following the "Options for Change" defence review after the...
subsidiary (now BAE Systems Submarine Solutions).

An estimated 5,900 people are employed directly as a result of the project; 3,500 BAE Systems staff at Barrow and 2,400 other people around the UK.

Astute-class boats are powered by a Rolls-Royce PWR
Rolls-Royce PWR
The Rolls-Royce pressurised water reactor series has powered British nuclear submarines since the Valiant class, commissioned in 1966. The first British nuclear submarine, HMS Dreadnought, was powered by a Westinghouse S5W reactor.- PWR1 :...
2 (Core H) reactor and fitted with a pump-jet
Pump-jet
A pump-jet, hydrojet, or water jet, is a marine system that creates a jet of water for propulsion. The mechanical arrangement may be a ducted propeller with nozzle, or a centrifugal pump and nozzle...
propulsor. The PWR2 reactor was developed for the Vanguard-class
Vanguard class submarine
The Vanguard class are the Royal Navy's current nuclear ballistic missile submarines , each armed with up to 16 Trident II Submarine-launched ballistic missiles...
ballistic missile submarines. As a result Astute-class boats are about 30 per cent larger than previous British attack submarines, which were powered by smaller diameter reactors.

Like all Royal Navy submarines, the bridge fin of the Astute-class boats is specially reinforced to allow surfacing through ice caps. They can fire Tomahawk cruise missiles from their launch tubes, including the new "tactical Tomahawk" currently under development. More than 39,000 acoustic tiles
Anechoic tile
Anechoic tiles are rubber or synthetic polymer tiles containing thousands of tiny voids, applied to the outer hulls of military ships and submarines, as well as anechoic chambers...
mask the vessel's sonar signature, giving the Astute class a better stealth quality than any other submarine previously operated by the Royal Navy. The vessel is equipped with the advanced Sonar 2076
Sonar 2076
Sonar 2076 is a submarine sonar detection system designed by Thales for the Royal Navy.The system comprises an integrated suite of active and passive sonar systems including bow, fin, flank and towed arrays...
, which is an integrated passive/active search and attack sonar suite with bow, intercept, flank and towed arrays.

The Astute Combat Management System is an evolved version of the Submarine Command System
SMCS
SMCS, the Submarine Command System, was first created for the Royal Navy of the United Kingdom's Vanguard class submarines as a tactical information system and a torpedo weapon control system...
used on other classes of submarine. The system receives data from the boat's sensors and displays real time imagery on all command consoles. The submarines also have DESO 25 high-precision echosounders, two CM010 non-hull-penetrating optronic masts
Photonics mast
A photonics mast is a sensor similar in concept to a submarine periscope, except that it doesn't require a periscope tube thus freeing design space duringconstruction and limiting risks of water leakage in the event of damage...
which carry thermal imaging and low-light TV and colour CCD TV sensors.

The Astute-class submarines can be fitted with a dry deck shelter
Dry Deck Shelter
A Dry Deck Shelter is a removable module that can be attached to a submarine to allow divers easy exit and entrance while the boat is submerged...
which allows special forces (e.g. SBS
Special Boat Service
The Special Boat Service is the special forces unit of the British Royal Navy. Together with the Special Air Service, Special Reconnaissance Regiment and the Special Forces Support Group they form the United Kingdom Special Forces and come under joint control of the same Director Special...
and SAS
Special Air Service
Special Air Service or SAS is a corps of the British Army constituted on 31 May 1950. They are part of the United Kingdom Special Forces and have served as a model for the special forces of many other countries all over the world...
) to deploy whilst the submarine is submerged.

Astute is the first Royal Navy submarine class to have a bunk for each member of the ship's company, ending the practice of 'hot bunking
Hot Racking
Hot racking is the sanctioned practice within military organizations of assigning more than one crew member to a bed or "rack" to reduce berthing space. The practice dates back at least to the sixteenth century, and today is particularly applied aboard submarines, where maximization of space is...
', whereby two sailors on opposite watches shared the same bunk. However in other respects studies found the Astute human factors design inferior to earlier submarines, such as having less mess-deck space than the built 45 years earlier.

BAE Systems issued a profit warning on 11 December 2002 as a result of the cost overruns and delays it was experiencing with the Astute class and also the Nimrod MRA4
BAE Systems Nimrod MRA4
The BAE Systems Nimrod MRA4 was a maritime patrol and attack aircraft intended to replace the Hawker Siddeley Nimrod MR2. The rebuilt aircraft would have extended the operating life of the Nimrod fleet by several decades and have significantly improved the aircraft by almost doubling the flight...
maritime reconnaissance/attack aircraft. The delay was caused primarily by the problems of using 3D CAD; Armed Forces Minister Adam Ingram said in 2006 that "due to the complexity of the programme, the benefits that CAD was envisaged to provide were more difficult to realise than either MoD or the contractor had assumed." Other issues were the insufficient capabilities within GEC-Marconi which became evident after contract-award and poor programme management. BAE and the Ministry of Defence reached an agreement in February 2003 whereby they would invest £250 million and £430 million respectively to address the programme's difficulties.

Work on the second and third submarines, Ambush and Artful, proceeded well with major milestones such as the closure of Ambushs reactor compartment, demonstrating significant schedule advance compared with Astute. BAE Systems and the MoD have made efforts to reduce costs and achieved significant cost-cutting and productivity gains. A £580 million cost increase was agreed in 2007 due to maturing of the design requiring more materials, inflationary costs, and "some programme throughput assumptions at the Barrow site not being borne out."

First-of-class HMS Astute was launched by Camilla, Duchess of Cornwall on 8 June 2007.


Submarines of the class

As of August 2006 BAE Systems was negotiating for a contract to build another four Astute-class submarines (boats 4 to 7). The fourth boat was ordered on 21 May 2007, to be called Audacious, and the names of boats 5, 6, and 7 have been agreed as Agamemnon, Anson, and Ajax. On 15 September 2011 it was announced that boat 5 would now be named Anson.

Upon the beginning of sea trials of Astute in November 2009, it was reported that long-lead items for boats 5 and 6 have been ordered, including their nuclear reactor cores, and that the stated intention of the MoD was for a total of seven Astute-class submarines.

On 25 March 2010, BAE Systems were given the go-ahead by the government to begin construction on boats 5 and 6, being given a £300 million contract for the "initial build" of boat 5 and "long lead procurement activities" for boat 6. In the same week the government re-affirmed their commitment to the construction of seven Astute-class submarines.