In telecommunications, identification, friend or foe (IFF) is an identification system
System
System is a set of interacting or interdependent components forming an integrated whole....
designed for command and control. It is a system that enables military and national (civilian-located ATC) interrogation systems to identify aircraft, vehicles, or forces as friendly and to determine their bearing and range from the interrogator.

IFF was first developed during World War II
World War II
World War II, or the Second World War , was a global conflict lasting from 1939 to 1945, involving most of the world's nations—including all of the great powers—eventually forming two opposing military alliances: the Allies and the Axis...
. The term is somewhat of a misnomer, as IFF can only positively identify friendly targets but not hostile ones. If an IFF interrogation receives no reply or an invalid reply, the object cannot be identified as friendly, but is not positively identified as a foe.

There are many reasons for friendly aircraft not to reply to IFF, such as battle damage or equipment failure, loss of encryption keys, and wrong encryption keys. Terrain-hugging aircraft are very often poor candidates for microwave line-of-sight systems such as the IFF system. Microwaves cannot penetrate terrain, and very often atmosphere effects (referred to as anomalous propagation
Anomalous propagation
Anomalous propagation includes different forms of electromagnetic wave propagation that are not encountered in a standard atmosphere. While technically the term includes propagation with larger losses than in standard atmosphere, in practical applications it is most often meant to refer to cases...
) cause timing, range, and azimuth issues. 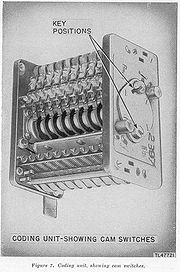 The world's first IFF, FuG-25a "Erstling" (English: "Debut"), was developed in Germany in 1940. It received the radar frequencies on 125 MHz (Freya radar
Freya radar
Freya was an early warning radar deployed by Germany during World War II, named after the Norse Goddess Freyja. During the war over a thousand stations were built. A naval version operating on a slightly different wavelength was also developed as Seetakt...
) and 550-580 MHz (Würzburg radar
Würzburg radar
The Würzburg radar was the primary ground-based gun laying radar for both the Luftwaffe and the German Army during World War II. Initial development took place before the war, entering service in 1940. Eventually over 4,000 Würzburgs of various models were produced...
). To start the identification procedure, the ground operator switched the pulse frequency of his radar from 3,750 Hz to 5,000 Hz. The airborne receiver decoded that and started to transmit its code. Before departure, 2 mechanical keys of 10 bits each were inserted into the shown reader. The IFF transmitter worked on 168 MHz with a power of 400 Watt (PEP). Unfortunately for the Germans, British intelligence were able to build their own IFF transmitter, called "Perfectos". When mounted into a RAF Mosquito
De Havilland Mosquito
The de Havilland DH.98 Mosquito was a British multi-role combat aircraft that served during the Second World War and the postwar era. It was known affectionately as the "Mossie" to its crews and was also nicknamed "The Wooden Wonder"...
, it could trigger the FuG-25 and therefore betrayed the position of the nightfighters. To avoid that, the FuG-25 had to be switched off very often.

IFF is used by both military and civilian aircraft. Modes 1, 2, 4 and 5 are for military use only. Modes 1, 2 and 3 are collectively known as Selective Identification Feature (SIF) modes. Civilian aircraft use modes A, C and S. Mode C which includes barometric pressure altitude information is often used in conjunction with mode A. Mode A is often referred to as mode 3/A due to the similarity to the military mode 3. Mode S is a new civilian mode developed to replace both mode A and C.

IFF is also called secondary radar, with primary radar bouncing an RF pulse off of the aircraft to determine position. Position with IFF is determined by comparing antenna dish angle and the delay from the interrogator (1,030 MHz) pulse to the received IFF pulses on (1,090 MHz).

The IFF of World War II
World War II
World War II, or the Second World War , was a global conflict lasting from 1939 to 1945, involving most of the world's nations—including all of the great powers—eventually forming two opposing military alliances: the Allies and the Axis...
and Soviet military systems (1946 to 1991) used coded radar
Radar
Radar is an object-detection system which uses radio waves to determine the range, altitude, direction, or speed of objects. It can be used to detect aircraft, ships, spacecraft, guided missiles, motor vehicles, weather formations, and terrain. The radar dish or antenna transmits pulses of radio...
signals (called Cross-Band Interrogation, or CBI) to automatically trigger the aircraft's transponder in an aircraft illuminated by the radar. Modern IFF systems use a separate specialized transponder beacon which can operate without radar. They are referred to as cross-band beacon or transponders.

An IFF transponder
Transponder
In telecommunication, the term transponder has the following meanings:...
responds:

In an IFF network both the interrogation and the reply are verified as friendly.

An IFF transponder receives interrogation pulses at one frequency (1,030 MHz), and sends the reply pulses at a different frequency (1,090 MHz). Just the opposite of a SIF interrogation, which is composed of two pulses spaced apart by a different amount for each mode, with the transponder reply being a long series of bits; the IFF interrogation is instead a long series of bits that contains the encrypted message and parity, and the reply is just three pulses.

The IFF message is encrypted with a secret key. IFF transponders with the same secret key will be able to decode the IFF message. Once decoded, the IFF transponder will execute the message and send back a 3 pulse reply. The interrogator then compares each reply to the challenge messages, and marks these targets friendly while also storing their azimuth and range.

A second possibility is a target being marked as a spoof target. That is, the target replies, but fails to process the IFF message correctly on a significant number of challenges. Targets marked as a spoofer can be declared hostile and, inside a battle-space, are often destroyed when able.

If no reply is received from the IFF transponder, the target continues to be an unknown. The IFF system is not used to declare a target hostile if they do not reply. Very often the pilot can have the wrong code (encryption key) selected, or the code is expired, and they will have an audible and visual alarm every time they are interrogated by IFF. If they can't clear the alarm they follow the pre-briefed safe passage procedures.

Mode 2 – provides 4-digit octal unit code. (military only – set on ground for fighters, can be changed in flight by transport aircraft)

Mode 3/A – provides a 4-digit octal identification code for the aircraft, assigned by the air traffic controller. (military and civilian)

Mode 5 – provides a cryptographically secured version of Mode S and ADS-B GPS position. (military only) Mode 5 is divided into two levels. Both are crypto-secure with Enhanced encryption, Spread Spectrum Modulation, and Time of Day Authentication. Level 1 is similar to Mode 4 information but enhanced with an Aircraft Unique PIN. Level 2 is the same as Mode 5 level one but includes additional information such as Aircraft Position and Other Attributes.

Mode S – provides multiple information formats to a selective interrogation. Typically aircraft are assigned a unique 24-bit Mode S address. The Mode S address is partitioned and a group of address ranges are allocated to each country. Some countries change the assigned address for security reasons, and thus it might not be a unique address. (military and civilian)

Notes
Modes 4 and 5 are designated for use by NATO forces.