Encyclopedia
The Strategic Defence and Security Review was announced by the newly formed Conservative-Liberal Democrat coalition
United Kingdom coalition government (2010–present)
The ConservativeLiberal Democrat coalition is the present Government of the United Kingdom, formed after the 2010 general election. The Conservative Party and the Liberal Democrats entered into discussions which culminated in the 2010 coalition agreement, setting out a programme for government...
government of the United Kingdom in May 2010, and published on 19 October 2010. The last review of United Kingdom defence posture was the Strategic Defence Review
Strategic Defence Review
The Strategic Defence Review was a British policy document produced by the Labour Government that came to power in 1997. Then Secretary of State for Defence, George Robertson, set out the initial defence policy of the new government, with a series of key decisions designed to enhance the United...
, published in 1998, and updated in 2003 by the Delivering Security in a Changing World
Delivering Security in a Changing World
The 2003 Defence White Paper, titled Delivering Security in a Changing World, set out the future structure of the British military, and was preceded by the 1998 Strategic Defence Review and the 2002 SDR New Chapter, which responded to the immediate challenges to security in the aftermath of the...
white paper
White paper
A white paper is an authoritative report or guide that helps solve a problem. White papers are used to educate readers and help people make decisions, and are often requested and used in politics, policy, business, and technical fields. In commercial use, the term has also come to refer to...
.

As well as wishing to see an updated security policy, both the Conservative and Liberal Democrat parties wanted the £38 billion overspend in the Ministry of Defence's (MOD) procurement budget addressed. Given that this coincided with the new government being committed to deficit reduction, the Treasury asked the MOD to prepare options for a 10–20% real terms reduction in its budget. However, the final figure was an 7.7% reduction over four years.

All three services will take cuts in manpower (see below). Overall, this will mean the largest overseas deployment possible will be 30,000 troops. This compares to the 45,000 involved in the invasion of Iraq
2003 invasion of Iraq
The 2003 invasion of Iraq , was the start of the conflict known as the Iraq War, or Operation Iraqi Freedom, in which a combined force of troops from the United States, the United Kingdom, Australia and Poland invaded Iraq and toppled the regime of Saddam Hussein in 21 days of major combat operations...
. 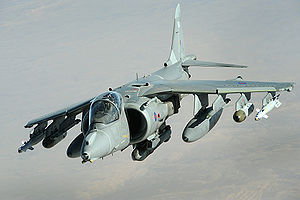