Encyclopedia
The Trafalgar class is a class of nuclear-powered
Nuclear marine propulsion
Nuclear marine propulsion is propulsion of a ship by a nuclear reactor. Naval nuclear propulsion is propulsion that specifically refers to naval warships...
fleet submarine
Submarine
A submarine is a watercraft capable of independent operation below the surface of the water. It differs from a submersible, which has more limited underwater capability...
s (SSN
Hull classification symbol
The United States Navy, United States Coast Guard, and United States National Oceanic and Atmospheric Administration use hull classification symbols to identify their ship types and each individual ship within each type...
) in service with the Royal Navy
Royal Navy
The Royal Navy is the naval warfare service branch of the British Armed Forces. Founded in the 16th century, it is the oldest service branch and is known as the Senior Service...
. They are a direct follow on from the Swiftsure class
Swiftsure class submarine
The Swiftsure class were a class of nuclear-powered fleet submarines in service with the Royal Navy from the early 1970s until 2010....
and were, until the introduction of the Astute class
Astute class submarine
The Astute-class is the latest class of nuclear-powered fleet submarines in service with the Royal Navy. The class sets a new standard for the Royal Navy in terms of weapons load, communication facilities and stealth. The boats are being constructed by BAE Systems Submarine Solutions at...
, the Royal Navy's most advanced nuclear fleet submarines.

Seven boats were built and commissioned, six remaining in service, having decommissioned in 2009.

Torbay, Trenchant, Talent, and Triumph have been fitted with the Sonar 2076
Sonar 2076
Sonar 2076 is a submarine sonar detection system designed by Thales for the Royal Navy.The system comprises an integrated suite of active and passive sonar systems including bow, fin, flank and towed arrays...
system, which the Royal Navy describes as the most advanced sonar in service with any navy in the world.

The Trafalgar class is a refinement of the Swiftsure class and designed six years later than its predecessor. The design included a new reactor core and Type 2020 sonar
Sonar
Sonar is a technique that uses sound propagation to navigate, communicate with or detect other vessels...
. Internal layout is almost identical to the Swiftsure, and it is only 2.5 metres longer. The Trafalgar class have strengthened fins and retractable hydroplanes, allowing them to surface through thick ice. The hull is also covered in anechoic tiles which are designed to absorb sound rather than reflect it, making the boats more difficult to detect with active sonar.

In 1993 Triumph sailed to Australia, covering a distance of 41,000 miles whilst submerged and without any forward support. This marked the longest solo deployment by any British nuclear submarine.

In 1982, Jane's Fighting Ships recorded: "Estimated cost of fourth submarine £175 million including equipment and weapon system when fitted." In 1986, Jane's recorded that the average cost for this class was £200 million at 1984-5 prices.

The entire class is based at HMNB Devonport
HMNB Devonport
Her Majesty's Naval Base Devonport , is one of three operating bases in the United Kingdom for the Royal Navy . HMNB Devonport is located in Devonport, in the west of the city of Plymouth in Devon, England...
, which is located in Devonport
Devonport, Devon
Devonport, formerly named Plymouth Dock or just Dock, is a district of Plymouth in the English county of Devon, although it was, at one time, the more important settlement. It became a county borough in 1889...
, in the west of the city of Plymouth
Plymouth
Plymouth is a city and unitary authority area on the coast of Devon, England, about south-west of London. It is built between the mouths of the rivers Plym to the east and Tamar to the west, where they join Plymouth Sound...
in Devon
Devon
Devon is a large county in southwestern England. The county is sometimes referred to as Devonshire, although the term is rarely used inside the county itself as the county has never been officially "shired", it often indicates a traditional or historical context.The county shares borders with...
, England
England
England is a country that is part of the United Kingdom. It shares land borders with Scotland to the north and Wales to the west; the Irish Sea is to the north west, the Celtic Sea to the south west, with the North Sea to the east and the English Channel to the south separating it from continental...
.

In 2001 took part in Operation Veritas
Operation Veritas
Operation Veritas was the codename used for British military operations against the Taliban government of Afghanistan in 2001. British forces played a supporting role to the American Operation Enduring Freedom. In addition, the British contribution was an important part of the overall forces deployed...
, the attack on Al-Qaeda and Taliban forces following the 9/11 attacks in the United States, becoming the first Royal Navy submarine to launch Tomahawk cruise missiles against Afghanistan
Afghanistan
Afghanistan , officially the Islamic Republic of Afghanistan, is a landlocked country located in the centre of Asia, forming South Asia, Central Asia and the Middle East. With a population of about 29 million, it has an area of , making it the 42nd most populous and 41st largest nation in the world...
.

On 16 April 2003, was the first Royal Navy vessel to return home from the invasion against Iraq, Operation Telic
Operation Telic
Operation TELIC was the codename under which all British military operations in Iraq were conducted between the start of the Invasion of Iraq on 19 March 2003 and the withdrawal of the last remaining British forces on 22 May 2011...
. She arrived in Plymouth flying the Jolly Roger
Jolly Roger
The Jolly Roger is any of various flags flown to identify a ship's crew as pirates. The flag most commonly identified as the Jolly Roger today is the skull and crossbones, a flag consisting of a human skull above two long bones set in an x-mark arrangement on a black field. This design was used by...
after having launched Tomahawk cruise missiles.

In March 2011, participated in Operation Ellamy
Operation Ellamy
Operation Ellamy was the codename for the United Kingdom participation in the 2011 military intervention in Libya. The operation was part of an international coalition aimed at enforcing a Libyan no-fly zone in accordance with the United Nations Security Council Resolution 1973 which stipulated...
, firing Tomahawk cruise missiles on 19 March and again on 20 March at Libyan air defence targets. The MOD
Ministry of Defence (United Kingdom)
The Ministry of Defence is the United Kingdom government department responsible for implementation of government defence policy and is the headquarters of the British Armed Forces....
also confirmed that on 24 March a further series of missiles were fired into Libya by a Trafalgar-class submarine at air defence targets around the city of Sabha. The boat involved this attack was again later revealed to be Triumph. The boat returned to Devonport on the 3 April 2011 flying a Jolly Roger adorned with six small Tomahawk axes to indicate the missiles fired by the submarine in the operation.

The Trafalgar class have suffered from a number of technical difficulties. In 1998, Trenchant experienced a steam leak, forcing the crew to shut down the nuclear reactor. In 2000, a leak in the reactor primary cooling circuit was discovered on Tireless, forcing her to proceed to Gibraltar
Gibraltar
Gibraltar is a British overseas territory located on the southern end of the Iberian Peninsula at the entrance of the Mediterranean. A peninsula with an area of , it has a northern border with Andalusia, Spain. The Rock of Gibraltar is the major landmark of the region...
on diesel power. The fault was found to be due to thermal fatigue cracks, requiring the other Trafalgar-class boats, and some of the remaining Swiftsure-class boats, to be urgently inspected and if necessary modified. In August 2000 it was revealed that with Tireless still at Gibraltar, Torbay, Turbulent, Trenchant and Talent were at Devonport
HMNB Devonport
Her Majesty's Naval Base Devonport , is one of three operating bases in the United Kingdom for the Royal Navy . HMNB Devonport is located in Devonport, in the west of the city of Plymouth in Devon, England...
for refit or repair and with Trafalgar undergoing sea trials, only one boat, Triumph, was fully operational. By 2005, refits had reportedly corrected these problems.

In 2002, Trafalgar ran aground off Skye during Operation Cockfight. 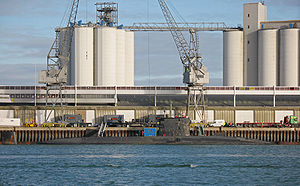 In 2007, a small explosion aboard Tireless
HMS Tireless (S88)
HMS Tireless is a nuclear submarine of the Royal Navy and is the third vessel of her class. She is the second submarine of the Royal Navy to bear this name...
resulted in the death of two sailors and injury of another. The accident took place while the submarine was submerged under the Arctic icecap during a joint British-American exercise. An oxygen candle in the forward section of the submarine was thought to be responsible for the accident.

The first of the submarines to be taken out of active service was Trafalgar, which was decommissioned on 4 December 2009.