The airline was originally founded as Asian Spirit, the first airline in the Philippines to be run as a cooperative
Cooperative
A cooperative is a business organization owned and operated by a group of individuals for their mutual benefit...
. 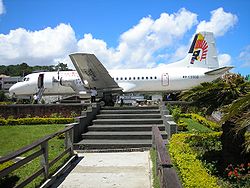 Asian Spirit was sold to AMY Holdings, a holding company controlled by businessman Alfredo M. Yao, in March 2008. After the success of the takeover, Yao expressed interest in merging Asian Spirit with South East Asian Airlines
South East Asian Airlines
Southeast Asian Airlines , Inc. operating as SEAir is an airline based in Pampanga, the Philippines. It operates domestic services and its main base is Ninoy Aquino International Airport, Manila, with hubs at Godofredo P. Ramos Airport, Malay, Aklan.- History :The airline was established in 1995...
(SEAIR). The two airlines have been in merger talks and were expected to make a decision soon. Yao was supposed to purchase a sixty percent stake in SEAIR, although the deal fell through because of a stolid response from SEAIR management. The merger talks failed and both airlines are operating independent.

The airline wants to fly to three international points to Sandakan
Sandakan
Sandakan is the second-largest city in Sabah, East Malaysia, on the north-eastern coast of Borneo. It is located on the east coast of the island and it is the administrative centre of Sandakan Division and was the former capital of British North Borneo...
( - already stopped), Malaysia from Zamboanga
Zamboanga City
The City of Zamboanga : is a highly urbanized, independent and a chartered city located in Mindanao, Philippines....
, to Seoul
Seoul
Seoul , officially the Seoul Special City, is the capital and largest metropolis of South Korea. A megacity with a population of over 10 million, it is the largest city proper in the OECD developed world...
from Kalibo
Kalibo, Aklan
Kalibo is the capital of the province of Aklan, in the northwest of Panay Island, Philippines. It is a First Class Municipality in the Western Visayas Region practically located at the center of all coastal municipalities of Aklan province...
, Laoag
Laoag City
The City of Laoag is a 1st class city in the province of Ilocos Norte, Philippines. It is the capital city of Ilocos Norte, and the province's political, commercial, and industrial hub. It is the location of the Ilocos region's only commercial airport...
, and Davao
Davao City
The City of Davao is the largest city in the island of Mindanao in the Philippines. Its international airport and seaports are among the busiest cargo hubs in the Philippines....
, and Macau
Macau
Macau , also spelled Macao , is, along with Hong Kong, one of the two special administrative regions of the People's Republic of China...
from Angeles City. However these international routings never took off. It intends to commence international expansion to Bangkok
Bangkok
Bangkok is the capital and largest urban area city in Thailand. It is known in Thai as Krung Thep Maha Nakhon or simply Krung Thep , meaning "city of angels." The full name of Bangkok is Krung Thep Mahanakhon Amon Rattanakosin Mahintharayutthaya Mahadilok Phop Noppharat Ratchathani Burirom...
and Singapore
Singapore
Singapore , officially the Republic of Singapore, is a Southeast Asian city-state off the southern tip of the Malay Peninsula, north of the equator. An island country made up of 63 islands, it is separated from Malaysia by the Straits of Johor to its north and from Indonesia's Riau Islands by the...
from Manila
Manila
Manila is the capital of the Philippines. It is one of the sixteen cities forming Metro Manila.Manila is located on the eastern shores of Manila Bay and is bordered by Navotas and Caloocan to the north, Quezon City to the northeast, San Juan and Mandaluyong to the east, Makati on the southeast,...
sometime in 2009.

On October 3, 2011, Manila Bulletin
Manila Bulletin
The Manila Bulletin , is the Philippines' largest broadsheet newspaper by circulation, followed by the Philippine Daily Inquirer. It bills itself as "The Nation's Leading Newspaper", which is its official slogan...
, a newspaper of national circulation in the Philippines, reported the signing of memorandum of understanding between Zest Air owner Alfredo Yao and his counterpart from private Chinese airline Hainan Airlines
Hainan Airlines
Hainan Airlines Company Limited is an airline headquartered in the HNA Development Building in Haikou, Hainan, People's Republic of China. It is the largest privately-owned air transport company and the fourth-largest airline in terms of fleet size in the People's Republic of China...
but the share of ownership by the HNA group under the agreement was not disclosed. The signing coincided with the visit of President Aquino
Benigno Aquino III
Benigno Simeon Cojuangco Aquino III , also known as Noynoy Aquino or PNoy, is a Filipino politician who has been the 15th and current President of the Philippines since June 2010....
to China in September 2011. The constitution of the Philippines
Philippines
The Philippines , officially known as the Republic of the Philippines , is a country in Southeast Asia in the western Pacific Ocean. To its north across the Luzon Strait lies Taiwan. West across the South China Sea sits Vietnam...
allows only up to 40% foreign ownership in any business registered in the Philippines. Zest Airways is majority-owned by the Zest-O group.
Updated October 10, 2011 (The Philippine Star) a newspaper of national circulation in the Philippines, reports that Zest Air denies buy-in of China's Hainan Airlines

MANILA, Philippines - A top official of Zest Airways denied newspaper reports that they have signed an agreement with a Chinese airline during President Aquino’s state visit to China and that the latter bought a 40 percent stake in their company.

In a statement, Arturo M. Alejandrino, Zest Air spokesman and member of its board of directors, said “Zest Air wishes to clarify that no memorandum of understanding has been signed between Hainan Airlines and ZestAir. Further, Hainan Airlines has no investment in Zest Air.”


Zest Airways has acquired both the Airbus A320
Airbus A320
The Airbus A320 family is a family of short- to medium-range, narrow-body, commercial passenger jet airliners manufactured by Airbus Industrie.Airbus was originally a consortium of European aerospace companies, and is now fully owned by EADS. Airbus's name has been Airbus SAS since 2001...
and the Xian MA60
Xian MA60
|-See also:-References:* Jackson, Paul. Jane's All The World's Aircraft 2003–2004. Coulsdon, UK: Jane's Information Group, 2003. ISBN 0-7106-2537-5.-External links:* * *...
, the only Philippine airline to do so, as part of its refleeting strategy.

The Airbus A320 aircraft were originally delivered to JetBlue Airways in 2003. They were purchased in September 2008 and delivered in December 2008 and January 2009. The aircraft were than repainted in Pinal Airpark in Arizona into Zest Airways livery and the seat configuration has been changed from Y 150 to Y 162.

On June 3, 2009, the airliner ordered 6 more Xian MA60's to be delivered starting October. but the delivery has been delayed for unknown reasons.

On July 11, 2009 RP-C 8989 arrived at Diosdao Macapagal International Airport. The A320 MSN 3621 made its first flight on September 12, 2008 under a French registration F-WWIK as was originally ordered by Kingfisher Airlines but was not accepted. The aircraft was subsequently sold to Asiawide Airways Inc. the holding company for all aircraft of Zest Airways owned by AMY Holding.

On August 2, 2009, the airline revealed that it would be able to mount international flights with the starting delivery of two brand new Airbus 320 in October this year. This is in addition to the first A320 it purchased earlier. The company was eyeing to buy 2 Boeing 767-300 aircraft to bring its total fleet to 11 aircraft by year end, flying to major tourist destinations in the country. This is part of the $150 million second wave of capital expansion. In 2008, the company invested $170 million. This additional fleet expansion never happened.