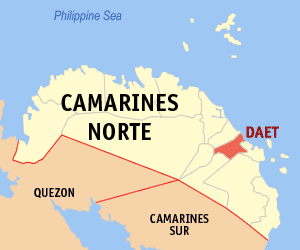 Daet, also known as the "Gateway to Bicolandia". A 1st class municipality in the province of Camarines Norte, Philippines
Philippines
The Philippines , officially known as the Republic of the Philippines , is a country in Southeast Asia in the western Pacific Ocean. To its north across the Luzon Strait lies Taiwan. West across the South China Sea sits Vietnam...
. It is the capital municipality of Camarines Norte. According to the 2007 census, it has a population of 94,184 or 18.33% of Camarines Norte's population. The current mayor of Daet is Tito Sarte Sarion. The first monument in honor of first Malayan hero Dr. Jose Rizal can also be found here in Daet.

The municipality is a popular surfing spot among surfers worldwide. Aside from that, it is home to a virgin group of islands, the Calaguas.

In 1948, the town of Mercedes
Mercedes, Camarines Norte
Mercedes is a 4th class municipality in the province of Camarines Norte, Philippines. According to the 2000 census, it has a population of 41,713 people in 7,932 households.-History:...
, Camarines Norte
Camarines Norte
Camarines Norte is a province of the Philippines located in the Bicol Region in Luzon. Its capital is Daet and the province borders Quezon to the west and Camarines Sur to the south.-Demographics:...
, was created from the barri.os of Babatnon, Lanot, Lalawigan, Pinagdamhan, Hamoraon, Culasi, Tarum, Pambuhan, Masalong-salong, Hinipaan, Matoogtoog, Cayucyucan, Mambongalon, Manguisoc, Gaboc, Cariñgo Island, Quinapaquian Island, Apwao Island, Mercedes, Tanayagan, Tagontong and Catandonganon, which all belonged to this town, by virtue of Republic Act No. 341, approved on July 26, 1948.

Daet is politically subdivided into 25 barangay
Barangay
A barangay is the smallest administrative division in the Philippines and is the native Filipino term for a village, district or ward...
s.

Aside from being a spot for surfing and kiteboarding, the Calaguas group of islands to its north has garnered attention from local and foreign tourists alike. The islands can be considered virgin since no resorts have been created there yet.

The Pineapple Festival (or "Pinyasan" as it is called by the locals) is considered to be the most colorful festival in Camarines Norte. The festival started in 1992, and is about the province's prime agricultural product, which is the "Queen of Formosa" pineapple. Noted for its sweetness and flavor, this kind of pineapple is produced only in Camarines Norte, thereby making it a specialty in the province. The festival goes on for about 10 days, and several events are held in the municipality. The festival aims to promote the culture of Daet and its citizens. The Pineapple Festival is held every 15–24 June annually initiated by Mayor Tito Sarte Sarion

The Bantayog Festival celebrates the founding of Camarines Norte. As of 2009, it has been 89 years since the province has become independent, since March 3, 1919, when Ambos Camarines (At that time Camarines Norte and Camarines Sur were one province) was split int two. This festival promotes the province as one which has unnoticed potential in the fields of tourism and commerce, and also the rich culture and hospitality of the people of Camarines Norte. The Bantayog Festival is held every March or April annually. It was launched on April 2005, the BANTAYOG FESTIVAL was named by John Carlo M. Peraz, former staff of the Tourism Office of the province.

• DIATOMACEOUS EARTH
(White Clay)The municipality is rich in mineral resources such as diatomaceous earth (DE) or commonly called white clay. This is one of the income generating industries of the municipality. This non-metallic mineral has a total approximate reserve of 1,289,600 metric tons.

• GRAVEL AND SAND
The municipality has a viable source of sand and gravel. It is being extracted by mining concessionaires.

• TRANSPORTATION
Land transportation is the primary means of transporting people, goods and services from the barangay to the town proper of Daet.

• WATER SUPPLY
The different barangays of the municipality is being served by levels I, II and III water supply. To cope with the consumption demand especially during summer, the CNWD has constructed an elevated water tank with a capacity of 200 cubic meters and implementing the “Tubig ng Buhay, Hatid sa Barangay” program.

Other barangays are being served by shallow wells, deep wells or dug wells.

• POWER SUPPLY
Daet has been served by electric power, formerly by the defunct Hidalgo Electric Enterprise, now by the National Power Corporation through the Camarines Norte Electric Cooperative (CANORECO). After the establishment of this cooperative, there was a great improvement in terms of power supply condition in the municipality.

• COMMUNICATION
Daet has a telecommunication system that is being run by one personnel of the Department of Transportation and Communication (DOTC). There are three satellites of Smart, Globe and Sun Cellular. There is postal office and has a staff of one mail carriers serving all barangays in the municipality. These personnel cannot adequately serve the entire from the lack of personnel; another problem is the difficulty in the delivery of mails in the remote and far-flung barangays.