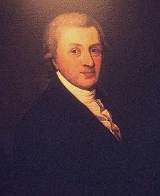 Encyclopedia
Arthur Guinness was an Irish
Irish people
The Irish people are an ethnic group who originate in Ireland, an island in northwestern Europe. Ireland has been populated for around 9,000 years , with the Irish people's earliest ancestors recorded having legends of being descended from groups such as the Nemedians, Fomorians, Fir Bolg, Tuatha...
brewer and the founder of the Guinness
Guinness
Guinness is a popular Irish dry stout that originated in the brewery of Arthur Guinness at St. James's Gate, Dublin. Guinness is directly descended from the porter style that originated in London in the early 18th century and is one of the most successful beer brands worldwide, brewed in almost...
brewery business and family
Guinness family
The Guinness family is an extensive aristocratic Irish Protestant family noted for their accomplishments in brewing, banking, politics and religious ministry...
.
He was also an entrepreneur, visionary and philanthropist.

At 27, in 1752, Guinness's godfather Arthur Price, the Church of Ireland
Church of Ireland
The Church of Ireland is an autonomous province of the Anglican Communion. The church operates in all parts of Ireland and is the second largest religious body on the island after the Roman Catholic Church...
Archbishop of Cashel, bequeathed him £100 in his will. Guinness invested the money and in 1755 had a brewery at Leixlip
Leixlip
-Politics:Since 1988 Leixlip has had a nine member Town Council , headed by a Cathaoirleach , which has control over many local matters, although it is limited in that it is not also a planning authority...
, just 17 km from Dublin. In 1759, Guinness went to the city and set up his own business. He took a 9,000 year lease on the 4 acres (16,187.4 m²) brewery at St. James's Gate from Mark Rainsford for an annual rent of £45.

Arthur Guinness was born into the Irish Protestant Guinness family
Guinness family
The Guinness family is an extensive aristocratic Irish Protestant family noted for their accomplishments in brewing, banking, politics and religious ministry...
, claimed to descend from the Gaelic Magennis
Magennis
Magennis is an Irish surname, derived from or the Sons of Angus, sometimes also spelt as Maginnis. The most famous branch controlled west County Down, particularly the Iveagh baronies, and occasionally Dundrum Castle to the east. The Magennis, Lords of Iveagh, are descendants of the Uí Echach Cobo...
clan of County Down
County Down
-Cities:*Belfast *Newry -Large towns:*Dundonald*Newtownards*Bangor-Medium towns:...
. Recent DNA
DNA
Deoxyribonucleic acid is a nucleic acid that contains the genetic instructions used in the development and functioning of all known living organisms . The DNA segments that carry this genetic information are called genes, but other DNA sequences have structural purposes, or are involved in...
evidence however suggests descent from the McCartan
McCartan
McCartan is a surname of Irish origins. Derived from Mac Artáin, which denotes the son of Artán, the surname was taken by chiefs of Kinelarty in County Down. The surname was thought to have lost its prefix to become Carton, Cartin, Carten and Cartan...
s, another County Down
County Down
-Cities:*Belfast *Newry -Large towns:*Dundonald*Newtownards*Bangor-Medium towns:...
clan, whose spiritual home lay in the townland of Guiness near Ballynahinch, County Down.

Guinness's place and date of birth are the subject of speculation. His gravestone in Oughterard, County Kildare says he died on 23 January 1803, at age 78, indicating that he was born sometime in 1724 or very early in 1725. This contradicts the date of 28 September 1725 chosen by the Guinness company in 1991, apparently to end speculation about his birthdate. The place of birth was perhaps his mother's home at Read homestead at Ardclough
Ardclough
Ardclough, officially Ardclogh , is a village and community in the parish of Kill County Kildare, Ireland, two miles off the N7 national primary road. Amongst its buildings today are a national school, a church, Ardclough GAA Club, and one shop "Buggys". Ardclough also contains the historic round...
County Kildare
County Kildare
County Kildare is a county in Ireland. It is part of the Mid-East Region and is also located in the province of Leinster. It is named after the town of Kildare. Kildare County Council is the local authority for the county...
.

In 2009 it was claimed he was born in nearby Celbridge
Celbridge
Celbridge is a town and townland on the River Liffey in County Kildare, Ireland. It is west of Dublin. As a town within the Dublin Metropolitan Area and the Greater Dublin Area, it is located at the intersection of the R403 and R405 regional roads....
where his parents lived in 1725 and where his father later became land steward for the Archbishop of Cashel
Archbishop of Cashel
The Archbishop of Cashel is an archiepiscopal title which takes its name after the town of Cashel, County Tipperary in Ireland. The title is still in use in the Roman Catholic Church, but in the Church of Ireland it was downgraded to a bishopric in 1838....
, Dr. Arthur Price, and may have brewed beer for the other workers on the estate. In his will, Dr. Price left £100 each to Arthur and his father in 1752.

In 1761 he married Olivia Whitmore in St. Mary's Church, Dublin
St. Mary's Church, Dublin
St. Mary's Church, Dublin is a former Church of Ireland building in Mary Street, Dublin.-The Church:Dating from the 17th century, the building was designed by Sir William Robinson, and is notable as the first Dublin church to be built with galleries....
, and they had 21 children, 10 of whom lived to adulthood. From 1764 they lived at Beaumont House, which he had built on a 51 acres (206,389.9 m²) farm, which is now a part of Beaumont Convalescent Home, behind the main part of Beaumont Hospital, between Santry
Santry
Santry is a suburb on the Northside of Dublin, Ireland, bordering Coolock, Glasnevin and Ballymun. Today it straddles the boundary of Dublin City and Fingal County Council area....
and Raheny
Raheny
Raheny is a northern suburb of Dublin, the capital city of Ireland. It is an old area, centred around an old village, and is referenced back to 570 AD but after years of light settlement, with a main village and a coastal hamlet, grew rapidly in the 20th century, and is now a mid-density...
in north County Dublin
County Dublin
County Dublin is a county in Ireland. It is part of the Dublin Region and is also located in the province of Leinster. It is named after the city of Dublin which is the capital of Ireland. County Dublin was one of the first of the parts of Ireland to be shired by King John of England following the...
. Beaumont
Beaumont, Dublin
Beaumont is a suburb of Dublin, located on the Northside. It lies within the postal district Dublin 9, sometimes known as D9. The name derives from the French for "beautiful mount".-History:...
(meaning beautiful hill) was named by him and the later Beaumont parish copied his original name. In his latter years he lived at Mountjoy Square in Dublin, which was then in the process of being built in the style of elegant Georgian architecture
Georgian architecture
Georgian architecture is the name given in most English-speaking countries to the set of architectural styles current between 1720 and 1840. It is eponymous for the first four British monarchs of the House of Hanover—George I of Great Britain, George II of Great Britain, George III of the United...
. Three of his sons were also brewers, and his other descendants eventually included missionaries, politicians and authors.

He was buried in his mother's family plot at Oughterard, County Kildare in January 1803.

Guinness supported Henry Grattan
Henry Grattan
Henry Grattan was an Irish politician and member of the Irish House of Commons and a campaigner for legislative freedom for the Irish Parliament in the late 18th century. He opposed the Act of Union 1800 that merged the Kingdoms of Ireland and Great Britain.-Early life:Grattan was born at...
in the 1780s and 1790s, not least because Grattan wanted to reduce the tax on beer. He was one of the four brewers' guild representatives on Dublin Corporation
Dublin Corporation
Dublin Corporation , known by generations of Dubliners simply as The Corpo, is the former name given to the city government and its administrative organisation in Dublin between 1661 and 1 January 2002...
from the 1760s until his death. Like Grattan, Guinness was publicly in favour of Catholic Emancipation
Catholic Emancipation
Catholic emancipation or Catholic relief was a process in Great Britain and Ireland in the late 18th century and early 19th century which involved reducing and removing many of the restrictions on Roman Catholics which had been introduced by the Act of Uniformity, the Test Acts and the penal laws...
from 1793. However, he was not a supporter of the United Irishmen during the 1798 rebellion. In general, the Guinness family became Irish Unionists and Arthur Guinness accepted the system, with Arthur "directly opposed to any movement toward Irish independence" and wanting "Ireland to remain under English control". The reality for a 18th century Dublin merchant was more complex, as Irish politics changed markedly after the closure of the Dublin parliament in 1801. Grattan's policy
Irish Patriot Party
The Irish Patriot Party was the name of a number of different political groupings in Ireland throughout the 18th century. They were primarily supportive of Whig concepts of personal liberty combined with an Irish identity that rejected full independence, but advocated strong self-government within...
from 1780 had secured a technically-independent Irish parliament by 1782 under the British crown, but this operated imperfectly; in 1800 Grattan led the opposition to the Act of Union
Act of Union 1800
The Acts of Union 1800 describe two complementary Acts, namely:* the Union with Ireland Act 1800 , an Act of the Parliament of Great Britain, and...
with Britain.

Guinness leased a brewery in Leixlip
Leixlip
-Politics:Since 1988 Leixlip has had a nine member Town Council , headed by a Cathaoirleach , which has control over many local matters, although it is limited in that it is not also a planning authority...
in 1755, brewing ale
Ale
Ale is a type of beer brewed from malted barley using a warm fermentation with a strain of brewers' yeast. The yeast will ferment the beer quickly, giving it a sweet, full bodied and fruity taste...
. Five years later he left his younger brother in charge of that enterprise and moved on to another in St. James' Gate
St. James's Gate Brewery
St. James's Gate Brewery is a brewery founded in 1759 in Dublin, Ireland by Arthur Guinness. The company is now a part of Diageo, a company formed via the merger of Guinness and Grand Metropolitan in 1997. The main product produced at the brewery is Guinness Draft.Leased for 9,000 years in 1759 by...
, Dublin, at the end of 1759. Visitors to the brewery can see the 9,000 year lease he signed for it, effective from 31 December 1759. By 1767 he was the master of the Dublin Corporation of Brewers. His first actual sales of porter
Porter (beer)
Porter is a dark-coloured style of beer. The history and development of stout and porter are intertwined. The name was first used in the 18th century from its popularity with the street and river porters of London. It is generally brewed with dark malts...
were listed on tax (excise) data from 1778, and it seems that other Dublin brewers had experimented in brewing porter beer from the 1760s. His major achievement was in expanding his brewery in 1797–99. Thereafter he brewed only porter and employed members of the Purser family who had brewed porter in London from the 1770s. The Pursers became partners in the brewery for most of the 19th century. By his death in 1803 the annual brewery output was over 20,000 barrels. Subsequently Arthur and/or his beer was nicknamed "Uncle Arthur
Guinness
Guinness is a popular Irish dry stout that originated in the brewery of Arthur Guinness at St. James's Gate, Dublin. Guinness is directly descended from the porter style that originated in London in the early 18th century and is one of the most successful beer brands worldwide, brewed in almost...
" in Dublin.