Encyclopedia
Magennis is an Irish
Irish people
The Irish people are an ethnic group who originate in Ireland, an island in northwestern Europe. Ireland has been populated for around 9,000 years , with the Irish people's earliest ancestors recorded having legends of being descended from groups such as the Nemedians, Fomorians, Fir Bolg, Tuatha...
surname
Family name
A family name is a type of surname and part of a person's name indicating the family to which the person belongs. The use of family names is widespread in cultures around the world...
, derived from or the Sons of Angus, sometimes also spelt as Maginnis. The most famous branch controlled west County Down
County Down
-Cities:*Belfast *Newry -Large towns:*Dundonald*Newtownards*Bangor-Medium towns:...
, particularly the Iveagh baronies, and occasionally Dundrum Castle
Dundrum Castle
Dundrum Castle is a castle, situated above the town of Dundrum, County Down, Northern Ireland. It was constructed by John de Courcy, sometime near the beginning of the 13th century, following his invasion of Ulster...
to the east. The Magennis, Lords of Iveagh, are descendants of the Uí Echach Cobo
Uí Echach Cobo
Uí Echach Cobo were a branch of the Dál nAraidi in Ulster . They gave their name to the early medieval Kingdom of Coba located in the baronies of Upper and Lower Iveagh in modern County Down...
branch of the Dál nAraidi
Dál nAraidi
Dál nAraidi was a kingdom of the Cruthin in the north-east of Ireland in the first millennium. The lands of the Dál nAraidi appear to correspond with the Robogdii of Ptolemy's Geographia, a region shared with Dál Riata...
dynasty of the Cruthin
Cruthin
The Cruthin were a people of early Ireland, who occupied parts of Counties Down, Antrim and Londonderry in the early medieval period....
.http://www.rootsweb.ancestry.com/~irlkik/ihm/ulster.htm "Iveagh" derives from "Uibh Eachach", the genitive of Uí Echach.

Their closest kin were the McCartan
McCartan
McCartan is a surname of Irish origins. Derived from Mac Artáin, which denotes the son of Artán, the surname was taken by chiefs of Kinelarty in County Down. The surname was thought to have lost its prefix to become Carton, Cartin, Carten and Cartan...
s of Kinelarty.http://www.electricscotland.com/webclans/cairney/53.htm John O'Hart
John O'Hart
John O'Hart was an Irish genealogist. He was born in Crossmolina, Co. Mayo, Ireland. A committed Roman Catholic, O'Hart originally planned to become Catholic priest but instead spent 2 years as a police officer. He was an Associate in Arts at the Queen's University of Belfast...
prepared their pedigree in his Irish Pedigrees; or the Origin and Stem of the Irish Nation. 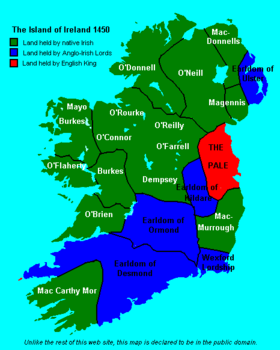 The clan ruled in west County Down before the Norman invasion of 1169 and allied itself to the Earldom of Ulster from 1177 until the death of William Donn de Burgh, 3rd Earl of Ulster
William Donn de Burgh, 3rd Earl of Ulster
William de Burgh, 3rd Earl of Ulster and 4th Baron of Connaught , was a noble in the Peerage of Ireland.-Background:...
in 1333. By 1500 the chief's family
Derbfine
The derbfine was an Irish agnatic kinship group and power structure as defined in the law tracts of the eighth century. Its principal purpose was as an institution of property inheritance, with property redistributed on the death of a member to those remaining members of the derbfine...
had 12 branches, with the strongest based in Rathfriland
Rathfriland
Rathfriland is a village in County Down, Northern Ireland. It is a hilltop Plantation of Ulster settlement between the Mourne Mountains, Slieve Croob and Banbridge. It had a population of 2,079 people in the 2001 Census.-History:...
and Kilwarlin. On the losing side at the Battle of Bellahoe (1539), in 1543 the chief travelled to Greenwich
Greenwich
Greenwich is a district of south London, England, located in the London Borough of Greenwich.Greenwich is best known for its maritime history and for giving its name to the Greenwich Meridian and Greenwich Mean Time...
and accepted terms of surrender and regrant
Surrender and regrant
During the Tudor conquest of Ireland , "surrender and regrant" was the legal mechanism by which Irish clans were to be converted from a power structure rooted in clan and kin loyalties, to a late-feudal system under the English legal system...
, and was knighted as Sir Arthur Guinez. In 1584-85 his son Sir Hugh was again regranted his lands, then about 100,000 acres. Though uninvolved in the Nine Years' War
Nine Years' War (Ireland)
The Nine Years' War or Tyrone's Rebellion took place in Ireland from 1594 to 1603. It was fought between the forces of Gaelic Irish chieftains Hugh O'Neill of Tír Eoghain, Hugh Roe O'Donnell of Tír Chonaill and their allies, against English rule in Ireland. The war was fought in all parts of the...
(1594-1603), about half of the clan's lands were sold in the 1610s and 1620s during the Plantation of Ulster
Plantation of Ulster
The Plantation of Ulster was the organised colonisation of Ulster—a province of Ireland—by people from Great Britain. Private plantation by wealthy landowners began in 1606, while official plantation controlled by King James I of England and VI of Scotland began in 1609...
. The chief was created a viscount
Viscount
A viscount or viscountess is a member of the European nobility whose comital title ranks usually, as in the British peerage, above a baron, below an earl or a count .-Etymology:...
in 1623 and he and some cousins were members of the Irish parliament, supporting Confederate Ireland
Confederate Ireland
Confederate Ireland refers to the period of Irish self-government between the Rebellion of 1641 and the Cromwellian conquest of Ireland in 1649. During this time, two-thirds of Ireland was governed by the Irish Catholic Confederation, also known as the "Confederation of Kilkenny"...
in the 1640s and the Patriot Parliament
Patriot Parliament
The Patriot Parliament is the name given to the session of the Irish Parliament called by King James II of Ireland during the War of the Two Kings in 1689. The parliament met in one session, from 7 May 1689 to 20 July 1689, and was the only session of the Irish Parliament under King James II.The...
of 1689.

The viscountcy lasted from 1623 to 1693 in the peerage of Ireland
Peerage of Ireland
The Peerage of Ireland is the term used for those titles of nobility created by the English and later British monarchs of Ireland in their capacity as Lord or King of Ireland. The creation of such titles came to an end in the 19th century. The ranks of the Irish peerage are Duke, Marquess, Earl,...
:

In America the name is more often spelt "Maginnis"; see:

Other variant spellings include:


The Border Chieftains of Ulster