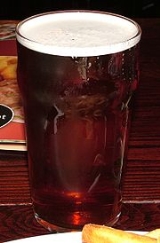 Encyclopedia
Ale is a type of beer
Beer
Beer is the world's most widely consumed andprobably oldest alcoholic beverage; it is the third most popular drink overall, after water and tea. It is produced by the brewing and fermentation of sugars, mainly derived from malted cereal grains, most commonly malted barley and malted wheat...
brewed from malted barley using a warm fermentation with a strain of brewers' yeast. The yeast will ferment the beer quickly, giving it a sweet, full bodied and fruity taste. Most ales contain hops
Hops
Hops are the female flower clusters , of a hop species, Humulus lupulus. They are used primarily as a flavoring and stability agent in beer, to which they impart a bitter, tangy flavor, though hops are also used for various purposes in other beverages and herbal medicine...
, which help preserve the beer and impart a bitter herbal flavour that balances the sweetness of the malt.

The term "ale" was initially used to describe a drink brewed without hops, unlike "beer". It has often now come to mean a bitter-tasting barley beverage fermented at room temperature. In some British usage, however, in homage to the original distinction, it is not now used except in compounds (such as "pale ale" (see below)) or as "real ale", a term adopted in opposition to the pressurised beers developed by industrial brewers in the 1960s, and used of a warm-fermented unpasteurised beer served from the cask (though not stout
Stout
Stout is a dark beer made using roasted malt or barley, hops, water and yeast. Stouts were traditionally the generic term for the strongest or stoutest porters, typically 7% or 8%, produced by a brewery....
or porter
Porter (beer)
Porter is a dark-coloured style of beer. The history and development of stout and porter are intertwined. The name was first used in the 18th century from its popularity with the street and river porters of London. It is generally brewed with dark malts...
).

Ale typically has bittering agent(s) to balance the sweetness of the malt and to act as a preservative. Ale was originally bittered with gruit
Gruit
Gruit is an old-fashioned herb mixture used for bittering and flavoring beer, popular before the extensive use of hops. Gruit or grut ale may also refer to the beverage produced using gruit....
, a mixture of herbs (sometimes spices) which was boiled in the wort
Wort (brewing)
Wort, , is the liquid extracted from the mashing process during the brewing of beer or whisky. Wort contains the sugars that will be fermented by the brewing yeast to produce alcohol.- Production :...
prior to fermentation. Later, hops
Hops
Hops are the female flower clusters , of a hop species, Humulus lupulus. They are used primarily as a flavoring and stability agent in beer, to which they impart a bitter, tangy flavor, though hops are also used for various purposes in other beverages and herbal medicine...
replaced the gruit blend in common usage as the sole bittering agent.

Ale, along with bread, was an important source of nutrition in the medieval world, particularly small beer, also known as table beer or mild beer, which was highly nutritious, contained just enough alcohol to act as a preservative, and provided hydration without intoxicating effects. Small beer would have been consumed daily by almost everyone in the medieval world, with higher-alcohol ales served for recreational purposes. The lower cost for proprietors combined with the lower taxes levied on small beer led to the selling of beer labeled "strong beer" that had actually been diluted with small beer.

The word 'ale' is native English, in Old English alu or ealu, but aloth, ealoth in the genitive and dative. It is believed to stem from Proto-Indo-European root *alu-, through Proto-Germanic *aluth-. This is a cognate
Cognate
In linguistics, cognates are words that have a common etymological origin. This learned term derives from the Latin cognatus . Cognates within the same language are called doublets. Strictly speaking, loanwords from another language are usually not meant by the term, e.g...
of Old Saxon alo, Danish, Norwegian, Swedish, Icelandic and Old Norse öl/øl, Old Bulgarian olu cider, Slovenian ol, Old Prussian alu, Lithuanian alus, Latvian alus (whence, Finnish olut).

Ale is typically fermented at temperatures between 15 and 24 °C (60 and 75°F). At temperatures above 75 (°F) the yeast can produce significant amounts of ester
Ester
Esters are chemical compounds derived by reacting an oxoacid with a hydroxyl compound such as an alcohol or phenol. Esters are usually derived from an inorganic acid or organic acid in which at least one -OH group is replaced by an -O-alkyl group, and most commonly from carboxylic acids and...
s and other secondary flavour and aroma products, and the result is often a beer with slightly "fruity" compounds resembling but not limited to apple, pear, pineapple, banana, plum, cherry, or prune.

Brown ales tend to be lightly hopped, and fairly mildly flavoured, often with a nutty taste. In the south of England they are dark brown, around 3-3.5% alcohol and quite sweet; in the north they are red-brown, 4.5-5% and drier. English brown ales first appeared in the early 1900s, with Manns Brown Ale and Newcastle Brown Ale
Newcastle Brown Ale
Newcastle Brown Ale is a beer produced by Heineken International. It was introduced in 1927 by Newcastle Breweries. In 2005, brewing was moved out of Newcastle upon Tyne for the first time, to Dunston on the other side of the River Tyne, and in 2010 moved entirely to Tadcaster, North Yorkshire...
as the best-known examples. The style became popular with homebrewers in North America in the early 1980s; Pete's Wicked Ale is an example, similar to the English original but substantially hoppier.

Pale ale was a term used for beers made from malt dried with coke
Coke (fuel)
Coke is the solid carbonaceous material derived from destructive distillation of low-ash, low-sulfur bituminous coal. Cokes from coal are grey, hard, and porous. While coke can be formed naturally, the commonly used form is man-made.- History :...
. Coke had been first used for roasting malt in 1642, but it wasn't until around 1703 that the term pale ale was first used. By 1784 advertisements were appearing in the Calcutta Gazette for "light and excellent" pale ale. By 1830 onward the expressions bitter and pale ale were synonymous. Breweries would tend to designate beers as pale ale, though customers would commonly refer to the same beers as bitter. It is thought that customers used the term bitter to differentiate these pale ales from other less noticeably hopped beers such as porter and mild. By the mid to late 20th century, while brewers were still labelling bottled beers as pale ale, they had begun identifying cask beers as bitter, except those from Burton on Trent, which tend to be referred to as pale ales regardless of the method of dispatch.

While the full range of ales is produced in Scotland, the term "Scotch Ale" is used internationally to denote a malty, strong dark ale. The malt may be slightly caramelised to impart toffee notes; generally, Scottish beers tend to be rather sweeter than English ones.

Mild ale originally meant unaged ale, the opposite of old ale. It can be any strength or colour, although most are dark brown and low in strength, typically between 3-3.5%. An example of a lighter coloured mild is Banks's Mild.

Burton Ale was a strong, dark, somewhat sweet ale brewed to good strength and vatted at the brewery for a year or more. Sometimes used as a 'stock ale' for blending into younger beers, these comparatively strong ales were also enjoyed on their own. Bass No.1 was a classic example of Burton Ale, and in modern times Fullers Golden Pride is often considered by some to be a rare remaining example of a classic Burton style ale. The strongest Burton Ales are often called Barley Wine.

In England, old ale was strong beer traditionally kept for about a year, gaining sharp, acetic flavours as it did so. The term is now applied to medium-strong dark beers, some of which are treated to resemble the traditional old ales. In Australia, the term is used even less discriminately, and is a general name for any dark beer.

Belgium produces a wide variety of speciality ales that elude easy classification. Virtually all Trappist beer
Trappist beer
A Trappist beer is a beer brewed by or under control of Trappist monks. There are a total of 174 Trappist monasteries worldwide ; only seven produce Trappist beer and are authorized to label their beers with the Authentic Trappist Product logo that indicates a compliance to the various rules of...
s and Abbey beers are high in alcoholic content but light in body due to the addition of large amounts of sucrose, which provides an alcohol boost with an essentially neutral flavour.

Trappist beer
Trappist beer
A Trappist beer is a beer brewed by or under control of Trappist monks. There are a total of 174 Trappist monasteries worldwide ; only seven produce Trappist beer and are authorized to label their beers with the Authentic Trappist Product logo that indicates a compliance to the various rules of...
s are brewed under direct control of the monks themselves. Of the 171 Trappist monasteries throughout the world, only seven brew beer, of which there are six in Belgium. The seventh is in the Netherlands. Abbey beer is brewed by commercial breweries in the style of a trappist beer, sometimes using the name of a monastery, often one that no longer exists or in some cases one that has licensed its name to a brewery.