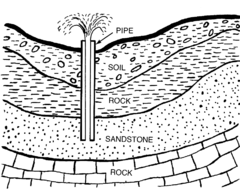 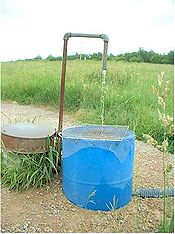 An artesian aquifer is a confined aquifer containing groundwater
Groundwater
Groundwater is water located beneath the ground surface in soil pore spaces and in the fractures of rock formations. A unit of rock or an unconsolidated deposit is called an aquifer when it can yield a usable quantity of water. The depth at which soil pore spaces or fractures and voids in rock...
under positive pressure. This causes the water level in a well to rise to a point where hydrostatic equilibrium has been reached. This type of well
Water well
A water well is an excavation or structure created in the ground by digging, driving, boring or drilling to access groundwater in underground aquifers. The well water is drawn by an electric submersible pump, a trash pump, a vertical turbine pump, a handpump or a mechanical pump...
is called an artesian well. Water may even reach the ground surface if the natural pressure is high enough, in which case the well is called a flowing artesian well.

An aquifer is a geologic layer of porous and permeable material such as sand and gravel, limestone
Limestone
Limestone is a sedimentary rock composed largely of the minerals calcite and aragonite, which are different crystal forms of calcium carbonate . Many limestones are composed from skeletal fragments of marine organisms such as coral or foraminifera....
, or sandstone
Sandstone
Sandstone is a sedimentary rock composed mainly of sand-sized minerals or rock grains.Most sandstone is composed of quartz and/or feldspar because these are the most common minerals in the Earth's crust. Like sand, sandstone may be any colour, but the most common colours are tan, brown, yellow,...
, through which water flows and is stored. An artesian aquifer is confined between impermeable rocks or clay which causes this positive pressure. The recharging of aquifers happens when the water table
Water table
The water table is the level at which the submarine pressure is far from atmospheric pressure. It may be conveniently visualized as the 'surface' of the subsurface materials that are saturated with groundwater in a given vicinity. However, saturated conditions may extend above the water table as...
at its recharge zone is at a higher elevation
Elevation
The elevation of a geographic location is its height above a fixed reference point, most commonly a reference geoid, a mathematical model of the Earth's sea level as an equipotential gravitational surface ....
than the head of the well
Water well
A water well is an excavation or structure created in the ground by digging, driving, boring or drilling to access groundwater in underground aquifers. The well water is drawn by an electric submersible pump, a trash pump, a vertical turbine pump, a handpump or a mechanical pump...
.

Fossil water
Fossil water
Fossil water or paleowater is groundwater that has remained sealed in an aquifer for a long period of time. Water can rest underground in "fossil aquifers" for thousands or even millions of years...
aquifers can also be artesian if they are under sufficient pressure from the surrounding rocks. This is similar to how many newly tapped oil well
Oil well
An oil well is a general term for any boring through the earth's surface that is designed to find and acquire petroleum oil hydrocarbons. Usually some natural gas is produced along with the oil. A well that is designed to produce mainly or only gas may be termed a gas well.-History:The earliest...
s are pressurized.

Artesian wells were named after the former province of Artois
Artois
Artois is a former province of northern France. Its territory has an area of around 4000 km² and a population of about one million. Its principal cities are Arras , Saint-Omer, Lens and Béthune.-Location:...
in France
France
The French Republic , The French Republic , The French Republic , (commonly known as France , is a unitary semi-presidential republic in Western Europe with several overseas territories and islands located on other continents and in the Indian, Pacific, and Atlantic oceans. Metropolitan France...
, where many artesian wells were drilled by Carthusian
Carthusian
The Carthusian Order, also called the Order of St. Bruno, is a Roman Catholic religious order of enclosed monastics. The order was founded by Saint Bruno of Cologne in 1084 and includes both monks and nuns...
monks from 1126.