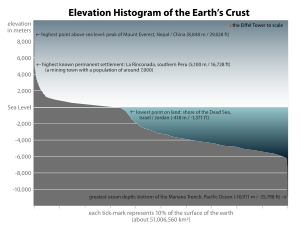 Less commonly, elevation is measured using the center of the Earth as the reference point. Due to equatorial bulge
Equatorial bulge
An equatorial bulge is a difference between the equatorial and polar diameters of a planet, due to the centrifugal force of its rotation. A rotating body tends to form an oblate spheroid rather than a sphere...
, there is debate as to which of the summits of Mt. Everest
Mount Everest
Mount Everest is the world's highest mountain, with a peak at above sea level. It is located in the Mahalangur section of the Himalayas. The international boundary runs across the precise summit point...
or Chimborazo
Chimborazo (volcano)
Chimborazo is a currently inactive stratovolcano located in the Cordillera Occidental range of the Andes. Its last known eruption is believed to have occurred around 550 AD....
is at the higher elevation, as the Chimborazo summit is further from the Earth's center while the Mt. Everest summit is higher above mean sea level. 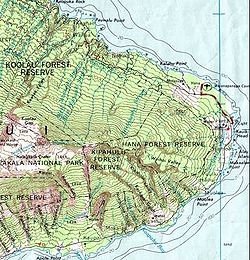 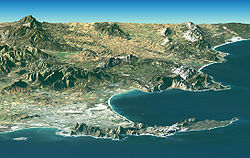 A topographical map
Topographic map
A topographic map is a type of map characterized by large-scale detail and quantitative representation of relief, usually using contour lines in modern mapping, but historically using a variety of methods. Traditional definitions require a topographic map to show both natural and man-made features...
is the main type of map
Map
A map is a visual representation of an area—a symbolic depiction highlighting relationships between elements of that space such as objects, regions, and themes....
used to depict elevation, often through use of contour line
Contour line
A contour line of a function of two variables is a curve along which the function has a constant value. In cartography, a contour line joins points of equal elevation above a given level, such as mean sea level...
s.
In a Geographic Information System
Geographic Information System
A geographic information system, geographical information science, or geospatial information studies is a system designed to capture, store, manipulate, analyze, manage, and present all types of geographically referenced data...
(GIS), digital elevation model
Digital elevation model
A digital elevation model is a digital model or 3-D representation of a terrain's surface — commonly for a planet , moon, or asteroid — created from terrain elevation data....
s (DEM) are commonly used to represent the surface (topography) of a place, through a raster
Raster graphics
In computer graphics, a raster graphics image, or bitmap, is a data structure representing a generally rectangular grid of pixels, or points of color, viewable via a monitor, paper, or other display medium...
(grid) dataset of elevations. Digital terrain models are another way to represent terrain in GIS.

This map is derived from GTOPO30
GTOPO30
GTOPO30 is a digital elevation model for the world, developed by USGS. It has a 30-arc second resolution , and is split into 33 tiles stored in the USGS DEM file format.-See also:* Shuttle Radar Topography Mission...
data that describes the elevation of Earth's terrain at intervals of 30 arcseconds (approximately 1 km). It uses color and shading instead of contour lines to indicate elevation.

Hypsography is the study of the distribution of elevations on the surface of the Earth
Earth
Earth is the third planet from the Sun, and the densest and fifth-largest of the eight planets in the Solar System. It is also the largest of the Solar System's four terrestrial planets...
, although the term is sometimes also applied to other rocky planets such as Mars
Mars
Mars is the fourth planet from the Sun in the Solar System. The planet is named after the Roman god of war, Mars. It is often described as the "Red Planet", as the iron oxide prevalent on its surface gives it a reddish appearance...
or Venus
Venus
Venus is the second planet from the Sun, orbiting it every 224.7 Earth days. The planet is named after Venus, the Roman goddess of love and beauty. After the Moon, it is the brightest natural object in the night sky, reaching an apparent magnitude of −4.6, bright enough to cast shadows...
. The term originates from the Greek
Greek language
Greek is an independent branch of the Indo-European family of languages. Native to the southern Balkans, it has the longest documented history of any Indo-European language, spanning 34 centuries of written records. Its writing system has been the Greek alphabet for the majority of its history;...
word "hypsos" meaning height. Most often it is used only in reference to elevation of land but a complete description of Earth's solid surface requires a description of the seafloor as well. Related to the term hypsometry
Hypsometry
Hypsometry is the measurement of land elevation relative to sea level. Bathymetry is the underwater equivalent...
, the measurement of these elevations of a planet's solid surface are taken relative to mean
Arithmetic mean
In mathematics and statistics, the arithmetic mean, often referred to as simply the mean or average when the context is clear, is a method to derive the central tendency of a sample space...
datum, except for Earth which is taken relative to the sea level
Sea level
Mean sea level is a measure of the average height of the ocean's surface ; used as a standard in reckoning land elevation...
.