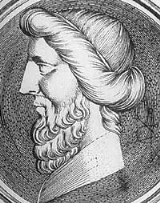 Encyclopedia
Archytas was an Ancient Greek
Ancient Greece
Ancient Greece is a civilization belonging to a period of Greek history that lasted from the Archaic period of the 8th to 6th centuries BC to the end of antiquity. Immediately following this period was the beginning of the Early Middle Ages and the Byzantine era. Included in Ancient Greece is the...
philosopher, mathematician
Mathematician
A mathematician is a person whose primary area of study is the field of mathematics. Mathematicians are concerned with quantity, structure, space, and change....
, astronomer
Astronomer
An astronomer is a scientist who studies celestial bodies such as planets, stars and galaxies.Historically, astronomy was more concerned with the classification and description of phenomena in the sky, while astrophysics attempted to explain these phenomena and the differences between them using...
, statesman
Statesman
A statesman is usually a politician or other notable public figure who has had a long and respected career in politics or government at the national and international level. As a term of respect, it is usually left to supporters or commentators to use the term...
, and strategist
Military strategy
Military strategy is a set of ideas implemented by military organizations to pursue desired strategic goals. Derived from the Greek strategos, strategy when it appeared in use during the 18th century, was seen in its narrow sense as the "art of the general", 'the art of arrangement' of troops...
. He was a scientist of the Pythagorean
Pythagoreanism
Pythagoreanism was the system of esoteric and metaphysical beliefs held by Pythagoras and his followers, the Pythagoreans, who were considerably influenced by mathematics. Pythagoreanism originated in the 5th century BCE and greatly influenced Platonism...
school and famous for being the reputed founder of mathematical mechanics, as well as a good friend of Plato
Plato
Plato , was a Classical Greek philosopher, mathematician, student of Socrates, writer of philosophical dialogues, and founder of the Academy in Athens, the first institution of higher learning in the Western world. Along with his mentor, Socrates, and his student, Aristotle, Plato helped to lay the...
.

Archytas was born in Tarentum
Taranto
Taranto is a coastal city in Apulia, Southern Italy. It is the capital of the Province of Taranto and is an important commercial port as well as the main Italian naval base....
, Magna Graecia
Magna Graecia
Magna Græcia is the name of the coastal areas of Southern Italy on the Tarentine Gulf that were extensively colonized by Greek settlers; particularly the Achaean colonies of Tarentum, Crotone, and Sybaris, but also, more loosely, the cities of Cumae and Neapolis to the north...
(now southern Italy) and was the son of Mnesagoras or Histiaeus. For a while, he was taught by Philolaus
Philolaus
Philolaus was a Greek Pythagorean and Presocratic philosopher. He argued that all matter is composed of limiting and limitless things, and that the universe is determined by numbers. He is credited with originating the theory that the earth was not the center of the universe.-Life:Philolaus is...
, and was a teacher of mathematics to Eudoxus of Cnidus
Eudoxus of Cnidus
Eudoxus of Cnidus was a Greek astronomer, mathematician, scholar and student of Plato. Since all his own works are lost, our knowledge of him is obtained from secondary sources, such as Aratus's poem on astronomy...
. Archytas and Eudoxus' student was Menaechmus
Menaechmus
Menaechmus was an ancient Greek mathematician and geometer born in Alopeconnesus in the Thracian Chersonese, who was known for his friendship with the renowned philosopher Plato and for his apparent discovery of conic sections and his solution to the then-long-standing problem of doubling the cube...
.

Archytas is believed to be the founder of mathematical mechanics
Mechanics
Mechanics is the branch of physics concerned with the behavior of physical bodies when subjected to forces or displacements, and the subsequent effects of the bodies on their environment....
. As only described in the writings of Aulus Gellius
Aulus Gellius
Aulus Gellius , was a Latin author and grammarian, who was probably born and certainly brought up in Rome. He was educated in Athens, after which he returned to Rome, where he held a judicial office...
five centuries after him, he was reputed to have designed and built the first artificial, self-propelled flying device, a bird-shaped model propelled by a jet of what was probably steam, said to have actually flown some 200 meters. This machine, which its inventor called The pigeon , may have been suspended on a wire or pivot for its flight. Archytas also wrote some lost works, as he was included by Vitruvius
Vitruvius
Marcus Vitruvius Pollio was a Roman writer, architect and engineer, active in the 1st century BC. He is best known as the author of the multi-volume work De Architectura ....
in the list of the twelve authors of works of mechanics. Thomas Winter has suggested that the pseudo-Aristotelian Mechanical Problems is an important mechanical work by Archytas, not lost after all, but misattributed.

Archytas named the harmonic mean
Harmonic mean
In mathematics, the harmonic mean is one of several kinds of average. Typically, it is appropriate for situations when the average of rates is desired....
, important much later in projective geometry
Projective geometry
In mathematics, projective geometry is the study of geometric properties that are invariant under projective transformations. This means that, compared to elementary geometry, projective geometry has a different setting, projective space, and a selective set of basic geometric concepts...
and number theory
Number theory
Number theory is a branch of pure mathematics devoted primarily to the study of the integers. Number theorists study prime numbers as well...
, though he did not invent it. According to Eutocius, Archytas solved the problem of doubling the cube
Doubling the cube
Doubling the cube is one of the three most famous geometric problems unsolvable by compass and straightedge construction...
in his manner with a geometric construction. Hippocrates of Chios
Hippocrates of Chios
Hippocrates of Chios was an ancient Greek mathematician, , and astronomer, who lived c. 470 – c. 410 BCE.He was born on the isle of Chios, where he originally was a merchant. After some misadventures he went to Athens, possibly for litigation...
before, reduced this problem to finding mean proportionals
Proportionality (mathematics)
In mathematics, two variable quantities are proportional if one of them is always the product of the other and a constant quantity, called the coefficient of proportionality or proportionality constant. In other words, are proportional if the ratio \tfrac yx is constant. We also say that one...
. Archytas' theory of proportions is treated in book VIII of Euclid
Euclid
Euclid , fl. 300 BC, also known as Euclid of Alexandria, was a Greek mathematician, often referred to as the "Father of Geometry". He was active in Alexandria during the reign of Ptolemy I...
's Elements
Euclid's Elements
Euclid's Elements is a mathematical and geometric treatise consisting of 13 books written by the Greek mathematician Euclid in Alexandria c. 300 BC. It is a collection of definitions, postulates , propositions , and mathematical proofs of the propositions...
, where is the construction for two proportional means, equivalent to the extraction of the cube root. According to Diogenes Laertius
Diogenes Laertius
Diogenes Laertius was a biographer of the Greek philosophers. Nothing is known about his life, but his surviving Lives and Opinions of Eminent Philosophers is one of the principal surviving sources for the history of Greek philosophy.-Life:Nothing is definitively known about his life...
, this demonstration, which uses lines generated by moving figures to construct the two proportionals between magnitudes, was the first in which geometry was studied with concepts of mechanics. The Archytas curve, which he used in his solution of the doubling the cube problem, is named after him.

Politically and militarily, Archytas appears to have been the dominant figure in Tarentum in his generation, somewhat comparable to Pericles
Pericles
Pericles was a prominent and influential statesman, orator, and general of Athens during the city's Golden Age—specifically, the time between the Persian and Peloponnesian wars...
in Athens
Athens
Athens , is the capital and largest city of Greece. Athens dominates the Attica region and is one of the world's oldest cities, as its recorded history spans around 3,400 years. Classical Athens was a powerful city-state...
a half-century earlier. The Tarentines elected him strategos
Strategos
Strategos, plural strategoi, is used in Greek to mean "general". In the Hellenistic and Byzantine Empires the term was also used to describe a military governor...
, 'general', seven years in a row – a step that required them to violate their own rule against successive appointments. He was allegedly undefeated as a general, in Tarentine campaigns against their southern Italian neighbors. The Seventh Letter of Plato
Plato
Plato , was a Classical Greek philosopher, mathematician, student of Socrates, writer of philosophical dialogues, and founder of the Academy in Athens, the first institution of higher learning in the Western world. Along with his mentor, Socrates, and his student, Aristotle, Plato helped to lay the...
asserts that Archytas attempted to rescue Plato during his difficulties with Dionysius II of Syracuse. In his public career, Archytas had a reputation for virtue as well as efficacy. Some scholars have argued that Archytas may have served as one model for Plato's philosopher king
Philosopher king
Philosopher kings are the rulers, or Guardians, of Plato's Utopian Kallipolis. If his ideal city-state is to ever come into being, "philosophers [must] become kings…or those now called kings [must]…genuinely and adequately philosophize" .-In Book VI of The Republic:Plato defined a philosopher...
, and that he influenced Plato's political philosophy as expressed in The Republic and other works (i.e., how does a society obtain good rulers like Archytas, instead of bad ones like Dionysus II?).

Archytas may have drowned in a shipwreck in the sea of Mattinata
Mattinata
Mattinata is a famous seaside resort town and comune in the province of Foggia, Apulia, southern Italy.-Geography:The only town in Apulia facing south the Adriatic sea, Mattinata is part of the Gargano National Park . The main urban area is located above two hills enclosed by mountains in the...
, where his body lay unburied on the shore until a sailor humanely cast a handful of sand on it. Otherwise, he would have had to wander on this side of the Styx
Styx (mythology)
The Styx is a river in Greek mythology that formed the boundary between Earth and the Underworld . It circles the Underworld nine times...
for a hundred years, such the virtue of a little dust, munera pulveris, as Horace
Horace
Quintus Horatius Flaccus , known in the English-speaking world as Horace, was the leading Roman lyric poet during the time of Augustus.-Life:...
calls it in Ode 1.28 on which this information on his death is based. The poem, however, is difficult to interpret and it is not certain that the shipwrecked and Archytas are in fact the same person.

The crater Archytas
Archytas (crater)
Archytas is a lunar impact crater that protrudes into the northern edge of Mare Frigoris. To the northwest is the comparably sized crater Timaeus, and the smaller Protagoras lies in the opposite direction to the southeast...
on the Moon
Moon
The Moon is Earth's only known natural satellite,There are a number of near-Earth asteroids including 3753 Cruithne that are co-orbital with Earth: their orbits bring them close to Earth for periods of time but then alter in the long term . These are quasi-satellites and not true moons. For more...
is named in his honour. 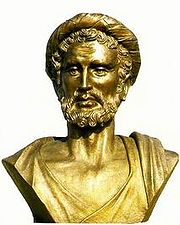 Another, less mathematical, way of thinking of this construction is that the Archytas Curve is basically the result of cutting out a torus formed by rotating a hemisphere of diameter d out of a cylinder also of diameter d. A cone can go through the same procedures also producing the Archytas Curve. Archytas used his curve to determine the construction of a cube with a volume of half of that of a given cube.