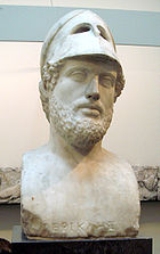 Overview
Pericles was a prominent and influential statesman
Statesman
A statesman is usually a politician or other notable public figure who has had a long and respected career in politics or government at the national and international level. As a term of respect, it is usually left to supporters or commentators to use the term...
, orator, and general of Athens
History of Athens
Athens is one of the oldest named cities in the world, having been continuously inhabited for at least 7000 years. Situated in southern Europe, Athens became the leading city of Ancient Greece in the first millennium BCE and its cultural achievements during the 5th century BCE laid the foundations...
during the city's Golden Age
Age of Pericles
Fifth-century Athens refers to the Greek city-state of Athens in the period of roughly 480 BC-404 BC. This was a period of Athenian political hegemony, economic growth and cultural flourishing formerly known as the Golden Age of Athens or The Age of Pericles. The period began in 480 BC when an...
—specifically, the time between the Persian
Greco-Persian Wars
The Greco-Persian Wars were a series of conflicts between the Achaemenid Empire of Persia and city-states of the Hellenic world that started in 499 BC and lasted until 449 BC. The collision between the fractious political world of the Greeks and the enormous empire of the Persians began when Cyrus...
and Peloponnesian
Peloponnesian War
The Peloponnesian War, 431 to 404 BC, was an ancient Greek war fought by Athens and its empire against the Peloponnesian League led by Sparta. Historians have traditionally divided the war into three phases...
wars. He was descended, through his mother, from the powerful and historically influential Alcmaeonid
Alcmaeonidae
The Alcmaeonidae or Alcmaeonids were a powerful noble family of ancient Athens, a branch of the Neleides who claimed descent from the mythological Alcmaeon, the great-grandson of Nestor....
family.

Pericles had such a profound influence on Athenian society that Thucydides
Thucydides
Thucydides was a Greek historian and author from Alimos. His History of the Peloponnesian War recounts the 5th century BC war between Sparta and Athens to the year 411 BC...
, his contemporary historian, acclaimed him as "the first citizen of Athens".

How does Pericles contrast the Athenian way of life from that of the Spartans?

What type of social and political system does Pericles describle Athens as having possessed?

How does Pericles describe Athens social and political systems?

How does Pericles dexribe Athens social and political system?
More

What was Pericles contribution and influence on greek society.
More

Nor is it any longer possible for you to give up this empire ... Your empire is now like a tyranny: it may have been wrong to take it; it is certainly dangerous to let it go.

On the eve of war, as quoted in History of the Peloponnesian War by Thucydides

But the bravest are surely those who have the clearest vision of what is before them, glory and danger alike, and yet notwithstanding go out to meet it.

The whole Earth is the Sepulchre of famous men; and their story is not graven only on Stone over their native earth, but lives on far away, without visible symbol, woven into the stuff of other men's lives.

As quoted in A Brief and True report concerning Williamsburg in Virginia by Rutherford Goodwin (1941), p. 125

Although only a few may originate a policy, we are all able to judge it.

What you leave behind is not what is engraved in stone monuments, but what is woven into the lives of others.

As quoted in Flicker to Flame : Living with Purpose, Meaning, and Happiness (2006) by Jeffrey Thompson Parker, p. 118
More
x