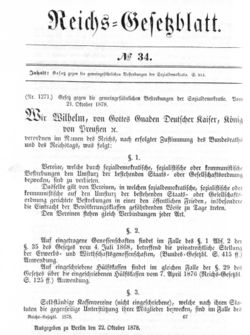 The Anti-Socialist Laws or Socialist Laws were a series of acts
Act of Parliament
An Act of Parliament is a statute enacted as primary legislation by a national or sub-national parliament. In the Republic of Ireland the term Act of the Oireachtas is used, and in the United States the term Act of Congress is used.In Commonwealth countries, the term is used both in a narrow...
, the first of which was passed on October 19, 1878 by the German
German Empire
The German Empire refers to Germany during the "Second Reich" period from the unification of Germany and proclamation of Wilhelm I as German Emperor on 18 January 1871, to 1918, when it became a federal republic after defeat in World War I and the abdication of the Emperor, Wilhelm II.The German...
Reichstag
Reichstag (German Empire)
The Reichstag was the parliament of the North German Confederation , and of the German Reich ....
lasting till March 31, 1881, and extended 4 times (May 1880, May 1884, April 1886 and February 1888). The legislation was passed after two failed attempts to assassinate
Assassination
To carry out an assassination is "to murder by a sudden and/or secret attack, often for political reasons." Alternatively, assassination may be defined as "the act of deliberately killing someone, especially a public figure, usually for hire or for political reasons."An assassination may be...
Kaiser Wilhelm I by the radicals Max Hödel
Max Hödel
Emil Max Hödel was a plumber from Leipzig, Germany who became known for a failed assassination. A former member of the Leipzig Social-Democratic Association, he was expelled from the organization in the 1870s and eventually became involved in anarchism.Hödel used a revolver to shoot at the German...
and Dr. Karl Nobiling
Karl Nobiling
Karl Eduard Nobiling was a German assassin who attacked Wilhelm I of Germany. Born in the Gummersbach district of western Germany, Nobiling studied agriculture and received a doctor's degree in 1876...
; it was meant to curb the growing strength of the Social Democratic Party
Social Democratic Party of Germany
The Social Democratic Party of Germany is a social-democratic political party in Germany...
(SPD, named SAP at the time), which was blamed for influencing the assassins. Although the law did not ban the SPD directly, it aimed to cripple the organization through various means. The banning of any group or meeting of whose aims were to spread socialist
Socialism
Socialism is an economic system characterized by social ownership of the means of production and cooperative management of the economy; or a political philosophy advocating such a system. "Social ownership" may refer to any one of, or a combination of, the following: cooperative enterprises,...
principles, the outlawing of trade unions and the closing of 45 newspapers are examples of suppression. The party circumvented these measures by having its candidates run as ostensible independents, by relocating publications outside of Germany and by spreading Social Democratic views as verbatim publications of Reichstag speeches, which were privileged speech with regard to censorship. The laws' main proponent was Chancellor Otto von Bismarck
Otto von Bismarck
Otto Eduard Leopold, Prince of Bismarck, Duke of Lauenburg , simply known as Otto von Bismarck, was a Prussian-German statesman whose actions unified Germany, made it a major player in world affairs, and created a balance of power that kept Europe at peace after 1871.As Minister President of...
, who feared the outbreak of a socialist revolution similar to the one that created the Paris Commune
Paris Commune
The Paris Commune was a government that briefly ruled Paris from March 18 to May 28, 1871. It existed before the split between anarchists and Marxists had taken place, and it is hailed by both groups as the first assumption of power by the working class during the Industrial Revolution...
in 1871. Despite the government's attempts to weaken the SPD, the party continued to grow in popularity. A bill introduced by Bismarck in 1888 which would have allowed for the denaturalization of Social Democrats was rejected. After Bismarck's resignation in 1890, the Reichstag did not renew the legislation, allowing it to lapse.

May 17: Prussian government demands the Bundesrat ban the SPD. In the Reichstag only conservatives support the bill.

June 2: Wilhelm I is shot by Dr Karl Nobiling.

July 30: New elections, socialists lose 3 of their 12 seats. Anti-Socialist bill passed by the 2 conservative parties and the national liberals.

October 19: Bill passed by 221 to 149.
Social Democrats voluntarily dissolved the party.
November 28: Minor state of siege declared in Berlin
Berlin
Berlin is the capital city of Germany and is one of the 16 states of Germany. With a population of 3.45 million people, Berlin is Germany's largest city. It is the second most populous city proper and the seventh most populous urban area in the European Union...
, 67 social democrats expelled.

August 21-3 1880: Wyden party congress sees the expulsion of Johann Most and Wilhelm Hasselmann for anarchism
Anarchism
Anarchism is generally defined as the political philosophy which holds the state to be undesirable, unnecessary, and harmful, or alternatively as opposing authority in the conduct of human relations...
by the SPD's moderate wing.

October 28: Minor state of siege in Hamburg
Hamburg
-History:The first historic name for the city was, according to Claudius Ptolemy's reports, Treva.But the city takes its modern name, Hamburg, from the first permanent building on the site, a castle whose construction was ordered by the Emperor Charlemagne in AD 808...
.

August 19-21 1882: Secret conference in Zürich
Zürich
Zurich is the largest city in Switzerland and the capital of the canton of Zurich. It is located in central Switzerland at the northwestern tip of Lake Zurich...
organized by Bebel. It partly heals the division between moderates and radicals.

March: Secret Copenhagen
Copenhagen
Copenhagen is the capital and largest city of Denmark, with an urban population of 1,199,224 and a metropolitan population of 1,930,260 . With the completion of the transnational Øresund Bridge in 2000, Copenhagen has become the centre of the increasingly integrating Øresund Region...
Congress condemns State socialism
State socialism
State socialism is an economic system with limited socialist characteristics, such as public ownership of major industries, remedial measures to benefit the working class, and a gradual process of developing socialism through government policy...
.

April 11: Prussian interior minister Puttkaner issues the strike decree. It gives the police the power to use the anti-socialist laws against strikers and expel their leaders.

May 20: Minor state of siege in Spremberg.

December 16: Minor state of siege in Frankfurt am Main.

Fall: Bismarck fails to get Socialist leaders expelled from Germany.

May 2 1889: Coal miners strike in the Rühr unsupported by SPD