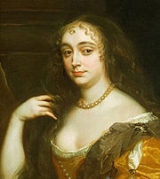 Encyclopedia
Anne Hyde was the first wife of James, Duke of York (the future King James II of England and VII of Scotland
James II of England
James II & VII was King of England and King of Ireland as James II and King of Scotland as James VII, from 6 February 1685. He was the last Catholic monarch to reign over the Kingdoms of England, Scotland, and Ireland...
), and the mother of two monarchs, Mary II of England and Scotland
Mary II of England
Mary II was joint Sovereign of England, Scotland, and Ireland with her husband and first cousin, William III and II, from 1689 until her death. William and Mary, both Protestants, became king and queen regnant, respectively, following the Glorious Revolution, which resulted in the deposition of...
and Anne of Great Britain.

She was born on 12 March 1638 (Old Style) or 22 March 1638 (New Style), at Cranbourne Lodge
Cranbourne Lodge
Cranbourne Lodge was a keeper's lodge for the royal hunting grounds of Cranbourne Chase, once adjoining but now part of Windsor Great Park in the English county of Berkshire...
, Windsor
Windsor, Berkshire
Windsor is an affluent suburban town and unparished area in the Royal Borough of Windsor and Maidenhead in Berkshire, England. It is widely known as the site of Windsor Castle, one of the official residences of the British Royal Family....
in Berkshire
Berkshire
Berkshire is a historic county in the South of England. It is also often referred to as the Royal County of Berkshire because of the presence of the royal residence of Windsor Castle in the county; this usage, which dates to the 19th century at least, was recognised by the Queen in 1957, and...
, to Frances Aylesbury
Frances Hyde, Countess of Clarendon
Frances Hyde, Countess of Clarendon - , was an English peeress and the mother-in-law of James II of England and grandmother of Queen Mary II and Queen Anne....
, daughter of Sir Thomas Aylesbury, and to Sir Edward Hyde
Edward Hyde, 1st Earl of Clarendon
Edward Hyde, 1st Earl of Clarendon was an English historian and statesman, and grandfather of two English monarchs, Mary II and Queen Anne.-Early life:...
(later 1st Earl of Clarendon
Earl of Clarendon
Earl of Clarendon is a title that has been created twice in British history, in 1661 and 1776. The title was created for the first time in the Peerage of England in 1661 for the statesman Edward Hyde, 1st Baron Hyde...
) of the Hyde family from Norbury
Norbury, Cheshire
Norbury is a civil parish in the unitary authority of Cheshire East and the ceremonial county of Cheshire. According to the 2001 census, the parish had a population of 190.-External links:...
in Cheshire.

In 1659, at Breda in the Netherlands
Netherlands
The Netherlands is a constituent country of the Kingdom of the Netherlands, located mainly in North-West Europe and with several islands in the Caribbean. Mainland Netherlands borders the North Sea to the north and west, Belgium to the south, and Germany to the east, and shares maritime borders...
, she allegedly married James
James II of England
James II & VII was King of England and King of Ireland as James II and King of Scotland as James VII, from 6 February 1685. He was the last Catholic monarch to reign over the Kingdoms of England, Scotland, and Ireland...
, then Duke of York, in a secret ceremony. The royal family at this time remained in exile following the English Civil War
English Civil War
The English Civil War was a series of armed conflicts and political machinations between Parliamentarians and Royalists...
, and Anne's father served as the loyal Royalist chief adviser to the prospective King Charles II of England
Charles II of England
Charles II was monarch of the three kingdoms of England, Scotland, and Ireland.Charles II's father, King Charles I, was executed at Whitehall on 30 January 1649, at the climax of the English Civil War...
, James's elder brother. Anne was Maid of Honour to Mary, Princess Royal and Princess of Orange
Mary, Princess Royal and Princess of Orange
Mary, Princess Royal, Princess of Orange and Countess of Nassau was the eldest daughter of King Charles I of England, Scotland, and Ireland and his queen, Henrietta Maria of France...
, sister of Charles and James. It was during this time that James seduced Anne while she was in his sister's service and Charles forced the reluctant James to marry Anne, saying that her strong character would be a positive influence on his weak-willed brother.

The couple went through an official but private marriage ceremony on 3 September 1660, in London
London
London is the capital city of :England and the :United Kingdom, the largest metropolitan area in the United Kingdom, and the largest urban zone in the European Union by most measures. Located on the River Thames, London has been a major settlement for two millennia, its history going back to its...
, following the English Restoration
English Restoration
The Restoration of the English monarchy began in 1660 when the English, Scottish and Irish monarchies were all restored under Charles II after the Interregnum that followed the Wars of the Three Kingdoms...
of the monarchy
Monarchy
A monarchy is a form of government in which the office of head of state is usually held until death or abdication and is often hereditary and includes a royal house. In some cases, the monarch is elected...
. The wedding took place between eleven o'clock at night and two o'clock in the morning at Worcester House, her father's house in the Strand
Strand, London
Strand is a street in the City of Westminster, London, England. The street is just over three-quarters of a mile long. It currently starts at Trafalgar Square and runs east to join Fleet Street at Temple Bar, which marks the boundary of the City of London at this point, though its historical length...
, and was solemnised by James's chaplain, Dr Joseph Crowther. Anne was not a beautiful woman; in fact, Samuel Pepys
Samuel Pepys
Samuel Pepys FRS, MP, JP, was an English naval administrator and Member of Parliament who is now most famous for the diary he kept for a decade while still a relatively young man...
slights her as being downright plain; however the French Ambassador described her as having "courage, cleverness, and energy almost worthy of a King's blood".

Anne and James' first child, Charles, was born less than two months after their marriage, but died in infancy, as did five further sons and daughters. Only two daughters survived: Mary
Mary II of England
Mary II was joint Sovereign of England, Scotland, and Ireland with her husband and first cousin, William III and II, from 1689 until her death. William and Mary, both Protestants, became king and queen regnant, respectively, following the Glorious Revolution, which resulted in the deposition of...
(born 30 April 1662 o.s.) and Anne
Anne of Great Britain
Anne ascended the thrones of England, Scotland and Ireland on 8 March 1702. On 1 May 1707, under the Act of Union, two of her realms, England and Scotland, were united as a single sovereign state, the Kingdom of Great Britain.Anne's Catholic father, James II and VII, was deposed during the...
(born 6 February 1665 o.s.). According to the Dictionary of National Biography
Dictionary of National Biography
The Dictionary of National Biography is a standard work of reference on notable figures from British history, published from 1885...
, she gave birth to "her eighth child, a daughter, on 9 February 1671 (o.s.), but by now her fatal illness, probably breast cancer
Breast cancer
Breast cancer is cancer originating from breast tissue, most commonly from the inner lining of milk ducts or the lobules that supply the ducts with milk. Cancers originating from ducts are known as ductal carcinomas; those originating from lobules are known as lobular carcinomas...
, was in an advanced stage". On 10 April 1671 (31 March o.s.), about seven weeks after the birth of their youngest child, Anne died, aged 33, at St. James's Palace
St. James's Palace
St. James's Palace is one of London's oldest palaces. It is situated in Pall Mall, just north of St. James's Park. Although no sovereign has resided there for almost two centuries, it has remained the official residence of the Sovereign and the most senior royal palace in the UK...
and was buried in Westminster Abbey
Westminster Abbey
The Collegiate Church of St Peter at Westminster, popularly known as Westminster Abbey, is a large, mainly Gothic church, in the City of Westminster, London, United Kingdom, located just to the west of the Palace of Westminster. It is the traditional place of coronation and burial site for English,...
on 15 April 1671 (5 April o.s.).

Late in her life, the Duchess of York secretly converted to Catholicism, much to the horror of her staunchly Anglican
Anglicanism
Anglicanism is a tradition within Christianity comprising churches with historical connections to the Church of England or similar beliefs, worship and church structures. The word Anglican originates in ecclesia anglicana, a medieval Latin phrase dating to at least 1246 that means the English...
family. After her death, sometime about 1672, her widower also converted to the Roman Catholic faith. At the order of James's older brother King Charles, however, James's and Anne's daughters received a Protestant
Protestantism
Protestantism is one of the three major groupings within Christianity. It is a movement that began in Germany in the early 16th century as a reaction against medieval Roman Catholic doctrines and practices, especially in regards to salvation, justification, and ecclesiology.The doctrines of the...
education.

King James was overthrown in a revolution
Glorious Revolution
The Glorious Revolution, also called the Revolution of 1688, is the overthrow of King James II of England by a union of English Parliamentarians with the Dutch stadtholder William III of Orange-Nassau...
against his Catholic rule in 1688, and Anne Hyde's daughter Mary and her son-in-law, William of Orange
William III of England
William III & II was a sovereign Prince of Orange of the House of Orange-Nassau by birth. From 1672 he governed as Stadtholder William III of Orange over Holland, Zeeland, Utrecht, Guelders, and Overijssel of the Dutch Republic. From 1689 he reigned as William III over England and Ireland...
, jointly assumed the throne. After James, no British King or Queen has affirmed belief in the Catholic faith.