The Anichkov Bridge is the first and most famous bridge across the Fontanka River in Saint Petersburg
Saint Petersburg
Saint Petersburg is a city and a federal subject of Russia located on the Neva River at the head of the Gulf of Finland on the Baltic Sea...
, Russia
Russia
Russia or , officially known as both Russia and the Russian Federation , is a country in northern Eurasia. It is a federal semi-presidential republic, comprising 83 federal subjects...
. The current bridge, built in 1841-42 and reconstructed in 1906-08, combines a simple form with some spectacular decorations. As well as its four famous horse sculptures (1849–50), the bridge has some of the most celebrated ornate iron railings in Saint Petersburg. The structure is mentioned in the works of Pushkin, Gogol, and Dostoevsky.

The first bridge was built in 1715-16 by order of Peter the Great, and named after its engineer, Mikhail Anichkov. The bridge was made of wood with several spans built on piles of supports lying just above the Fontanka River. It was designed by Domenico Trezzini
Domenico Trezzini
Domenico Trezzini was a Swiss Italian architect who elaborated the Petrine Baroque style of Russian architecture.Domenico was born in Astano, near Lugano, in the Italian-speaking Ticino . He probably studied in Rome...
.Nothing remains of this first bridge.

As the city grew and river traffic increased, plans were unveiled in 1721 to create a new drawbridge
Drawbridge
A drawbridge is a type of movable bridge typically associated with the entrance of a castle surrounded by a moat. The term is often used to describe all different types of movable bridges, like bascule bridges and lift bridges.-Castle drawbridges:...
. The Anichkov Bridge was one of seven three-span stone drawbridges with towers built across the Fontanka River in the late 18th century, of which the Lomonosov Bridge
Lomonosov Bridge
Lomonosov Bridge across the Fontanka River is the best preserved of towered movable bridges that used to be typical for Saint Petersburg in the 18th century....
and the Stary Kalinkin Bridge are the two still extant. At that time, the Anichkov Bridge was an especially popular attraction on Nevsky Prospekt
Nevsky Prospekt
Nevsky Avenue |Prospekt]]) is the main street in the city of St. Petersburg, Russia. Planned by Peter the Great as beginning of the road to Novgorod and Moscow, the avenue runs from the Admiralty to the Moscow Railway Station and, after making a turn at Vosstaniya Square, to the Alexander...
, as well as a popular subject for illustrations and paintings.

By the 1840s the 18th-century design, especially its large towers, was deemed unsuitable for the growing amount of traffic passing over the Anichkov Bridge along Nevsky Prospekt. In 1841-42 a grander structure, more appropriate to the width of Nevsky Prospekt, was built on the site under the supervision of Lt. General A. D. Gotman. The new bridge was made of stone, and had three spans closed off with gently sloping arches. This simple, concise form corresponded well with the massive cast-iron fencing bordering Anichkov Bridge and mermaid cast-iron railings, originally designed by Karl Friedrich Schinkel
Karl Friedrich Schinkel
Karl Friedrich Schinkel was a Prussian architect, city planner, and painter who also designed furniture and stage sets. Schinkel was one of the most prominent architects of Germany and designed both neoclassical and neogothic buildings.-Biography:Schinkel was born in Neuruppin, Margraviate of...
for the Palace Bridge in Berlin
Berlin
Berlin is the capital city of Germany and is one of the 16 states of Germany. With a population of 3.45 million people, Berlin is Germany's largest city. It is the second most populous city proper and the seventh most populous urban area in the European Union...
. However, the bridge's stone arches were a continual source of problems, and in 1906-08 the bridge had once again to be reconstructed and its arches reinforced. 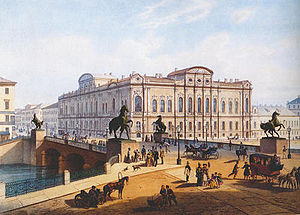 The Horse Tamers, designed by the Russian sculptor, Baron Peter Klodt von Urgensburg. They rank among the city's most recognizable landmarks. The theme derives from the colossal Roman marbles, often identified with the Dioscuri, prominently sited on the Quirinal Hill
Quirinal Hill
The Quirinal Hill is one of the Seven Hills of Rome, at the north-east of the city center. It is the location of the official residence of the Italian Head of State, who resides in the Quirinal Palace; by metonymy "the Quirinal" has come to stand for the Italian President.- History :It was...
, Rome. Guillaume Coustou
Guillaume Coustou the Elder
Guillaume Coustou the Elder was a French sculptor and academician. Coustou was the younger brother of French sculptor Nicolas Coustou and the pupil of his mother's brother, Antoine Coysevox...
's baroque marble horse tamers for Marly-le-Roi
Marly-le-Roi
Marly-le-Roi is a commune in the Yvelines department in the Île-de-France region in north-central France. It is located in the western suburbs of Paris from the centre....
, the Chevaux de Marly, were resited at the opening to the Champs-Elysées
Champs-Élysées
The Avenue des Champs-Élysées is a prestigious avenue in Paris, France. With its cinemas, cafés, luxury specialty shops and clipped horse-chestnut trees, the Avenue des Champs-Élysées is one of the most famous streets and one of the most expensive strip of real estate in the world. The name is...
, Paris, at the Revolution.

The St Petersburg sculptures have an interesting history. Prior to 1851, when the definitive versions were installed in the bridge, Tsar Nicholas I
Nicholas I of Russia
Nicholas I , was the Emperor of Russia from 1825 until 1855, known as one of the most reactionary of the Russian monarchs. On the eve of his death, the Russian Empire reached its historical zenith spanning over 20 million square kilometers...
had given two of them to Prussian King Frederick William IV in 1842, and the other two had been sent in 1846 to Naples
Naples
Naples is a city in Southern Italy, situated on the country's west coast by the Gulf of Naples. Lying between two notable volcanic regions, Mount Vesuvius and the Phlegraean Fields, it is the capital of the region of Campania and of the province of Naples...
as a sign of gratitude for the hospitality shown to the Tsar during his trip there (see here and here). "Petersburg lore tells of Peter Klodt's death immediately upon embarrassing discovery that tongues had been omitted on two of the four sculptural horses". Another urban legend
Urban legend
An urban legend, urban myth, urban tale, or contemporary legend, is a form of modern folklore consisting of stories that may or may not have been believed by their tellers to be true...
has it that Klodt depicted his powerful enemy's face under the tail of one of the bronze stallions.

In 1941, during the Second World War, when the bridge came under heavy fire from German artillery, the sculptures were removed from their platforms and buried in the nearby Anichkov Palace
Anichkov Palace
Anichkov Palace is a former imperial palace in Saint Petersburg, at the intersection of Nevsky Avenue and the Fontanka.-History:The palace, situated on the plot formerly owned by Antonio de Vieira, takes its name from the nearby Anichkov Bridge across the Fontanka...
garden. The bridge suffered serious damage during the war, but has been fully restored. As a memorial, the pedestal of one of the statues retains the effects of artillery fire, with a plaque explaining this to passersby. Prior to the tercentenary of Saint Petersburg, the statues were removed from the bridge again and underwent thorough restoration.