Encyclopedia
Anichkov Palace is a former imperial palace
Palace
A palace is a grand residence, especially a royal residence or the home of a head of state or some other high-ranking dignitary, such as a bishop or archbishop. The word itself is derived from the Latin name Palātium, for Palatine Hill, one of the seven hills in Rome. In many parts of Europe, the...
in Saint Petersburg
Saint Petersburg
Saint Petersburg is a city and a federal subject of Russia located on the Neva River at the head of the Gulf of Finland on the Baltic Sea...
, at the intersection of Nevsky Avenue and the Fontanka
Fontanka
Fontanka is a left branch of the river Neva, which flows through the whole of Central Saint Petersburg, Russia. Its length is 6,700 meters, its width is up to 70 meters, and its depth is up to 3,5 meters. The Fontanka Embankment is lined with the former private residences of Russian nobility.This...
.

The palace, situated on the plot formerly owned by Antonio de Vieira, takes its name from the nearby Anichkov Bridge
Anichkov Bridge
The Anichkov Bridge is the first and most famous bridge across the Fontanka River in Saint Petersburg, Russia. The current bridge, built in 1841-42 and reconstructed in 1906-08, combines a simple form with some spectacular decorations...
across the Fontanka. Designed for the Empress Elizabeth of Russia in a dazzling Baroque
Baroque
The Baroque is a period and the style that used exaggerated motion and clear, easily interpreted detail to produce drama, tension, exuberance, and grandeur in sculpture, painting, literature, dance, and music...
style, the palace came to be known as the most imposing private residence of the Elizabethan era. Some suggest architects Bartolomeo Rastrelli
Bartolomeo Rastrelli
Francesco Bartolomeo Rastrelli was an Italian architect naturalized Russian. He developed an easily recognizable style of Late Baroque, both sumptuous and majestic...
and Mikhail Zemtsov
Mikhail Zemtsov
Mikhail Grigorievich Zemtsov was a Russian architect who practiced a sober, restrained Petrine Baroque style, which he learned from his peer Domenico Tresini...
were responsible for the design, though it's yet to be substantiated. The main frontage faces the river and was originally connected to it by a Canal
Canal
Canals are man-made channels for water. There are two types of canal:#Waterways: navigable transportation canals used for carrying ships and boats shipping goods and conveying people, further subdivided into two kinds:...
. 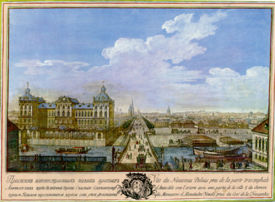 Construction works continued for thirteen years and, when finally finished in 1754, the palace was presented by the Empress to her favourite and likely spouse, Count Aleksey Razumovsky. After his death, the palace reverted to the crown, only to be donated by Catherine the Great of Russia
Catherine II of Russia
Catherine II, also known as Catherine the Great , Empress of Russia, was born in Stettin, Pomerania, Prussia on as Sophie Friederike Auguste von Anhalt-Zerbst-Dornburg...
to her own favourite, Prince Potemkin, in 1776. The architect Ivan Starov
Ivan Starov
Ivan Yegorovich Starov was a Russian architect from St. Petersburg who devised the master plans for Yaroslavl, Voronezh, Pskov, Dnipropetrovsk, Mykolaiv, and many other towns in Russia and Ukraine...
was charged with extensive renovations of the palace in the newly-fashionable Neoclassical style
Neoclassical architecture
Neoclassical architecture was an architectural style produced by the neoclassical movement that began in the mid-18th century, manifested both in its details as a reaction against the Rococo style of naturalistic ornament, and in its architectural formulas as an outgrowth of some classicizing...
, which was effected in 1778 and 1779. Simultaneously a regular park was laid out by an English garden architect, William Hould.

Upon Potemkin's demise, the palace was restored to the crown and adapted to accommodate Her Imperial Majesty's Cabinet. The last major structural additions were made in the reign of Alexander I
Alexander I of Russia
Alexander I of Russia , served as Emperor of Russia from 23 March 1801 to 1 December 1825 and the first Russian King of Poland from 1815 to 1825. He was also the first Russian Grand Duke of Finland and Lithuania....
, with Quarenghi
Giacomo Quarenghi
Giacomo Quarenghi was the foremost and most prolific practitioner of Palladian architecture in Imperial Russia, particularly in Saint Petersburg.- Career in Italy :...
's construction of the Imperial Cabinet along Nevsky Avenue. The latter structure was formulated in a rigorous Neoclassical style and many people feel that it doesn't complement Rastrelli's original work. Three year later, Alexander I bestowed the palace on his sister, Grand Duchess Elena Pavlovna of Russia - she was later the Grand Duchess of Mecklenburg-Schwerin by marriage. Several architects worked on the edifice since then, and its interiors were continuously refurbished.

The future Alexander III of Russia
Alexander III of Russia
Alexander Alexandrovich Romanov , historically remembered as Alexander III or Alexander the Peacemaker reigned as Emperor of Russia from until his death on .-Disposition:...
saw new life breathed into the palace, ensuring its refacing in a variety of historic styles. It was there that the last Russian tsar, Nicholas II
Nicholas II of Russia
Nicholas II was the last Emperor of Russia, Grand Prince of Finland, and titular King of Poland. His official short title was Nicholas II, Emperor and Autocrat of All the Russias and he is known as Saint Nicholas the Passion-Bearer by the Russian Orthodox Church.Nicholas II ruled from 1894 until...
, spent his childhood years. It was also the setting for numerous family festivities, including the wedding of Nicholas's niece Irina Romanova
Princess Irina of Russia
Princess Irina Alexandrovna of Russia was the only daughter of Grand Duke Alexander Mikhailovich of Russia and Grand Duchess Xenia Alexandrovna of Russia...
to Prince Felix Yusupov
Felix Yusupov
Prince Felix Felixovich Yusupov, Count Sumarokov-Elston , was best known for participating in the murder of Grigori Rasputin, the faith healer who was said to have influenced decisions of Tsar Nicholas II and Tsaritsa Alexandra Feodorovna.-Biography:...
in 1914. It is often said that the family of the last tsar preferred the cozy apartments of Anichkov Palace to the vastness of their official residence, the Winter Palace
Winter Palace
The Winter Palace in Saint Petersburg, Russia, was, from 1732 to 1917, the official residence of the Russian monarchs. Situated between the Palace Embankment and the Palace Square, adjacent to the site of Peter the Great's original Winter Palace, the present and fourth Winter Palace was built and...
. His mother, Maria Feodorovna, continued to have right of residence in the palace until the February Revolution
February Revolution
The February Revolution of 1917 was the first of two revolutions in Russia in 1917. Centered around the then capital Petrograd in March . Its immediate result was the abdication of Tsar Nicholas II, the end of the Romanov dynasty, and the end of the Russian Empire...
, although she had moved to Kiev away from St. Petersburg. After the revolution the Ministry of Provisions moved there instead.

Following the October Revolution
October Revolution
The October Revolution , also known as the Great October Socialist Revolution , Red October, the October Uprising or the Bolshevik Revolution, was a political revolution and a part of the Russian Revolution of 1917...
, the Anichkov Palace was nationalized and designated the St. Petersburg City Museum. Since 1934, when it was converted into the Young Pioneer Palace, the palace has housed over hundred after-school clubs for more than 10,000 children. While a small museum inside is open to the public at selected times, the edifice is normally not accessible to tourists.